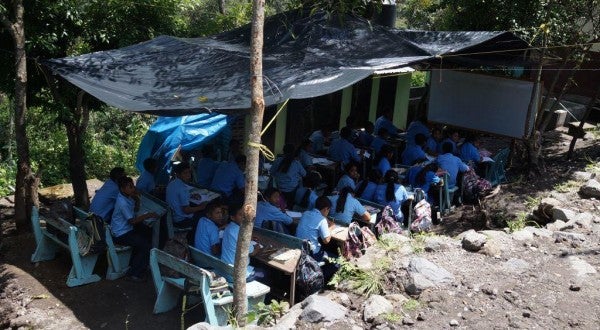 Western Honduras is an extremely mountainous region filled with beautiful and lush pine forests. It is inhabited by the population of lenka origin, descendants of Lempira, who was a great ancestor of the independence of Latin America. On the other hand, this region of Honduras faces major development challenges today. Its poverty rates are higher than the rest of the country, which is related to the low educational achievement of its population. Twenty-year-olds have only seven years of education on average, which means that only one of every two children who finishes sixth grade enrolls in seventh. Overall, each year about 14,000 children of 12 and 13 years old interrupt their education.

In response, the government of Honduras decided to take action through the Ministry of Development and Social Inclusion, and the coordination and drive of the Ministry of Education along with IDB’s support. Despite the intention to act rapidly, some questions emerged: Should we install schools in those communities? What kind of schools could be built? Should we give students a transport voucher? Will students attend school and learn?

Difficult decisions were made.

In the first phase, the agreement was to serve areas with a large population of sixth-grade graduates who had not continued to the seventh due to the lack of local education offer. Moreover, the idea was to focus on villages or nearby towns that are accessible throughout the year.

Due to limited resources, it was decided to use the experience of the Tutorial Learning System (SAT), which is an alternative high school program that provides instruction from 7th to 12th grade to young people living in remote rural communities in five Latin American countries.

This way, instructors provided education services and used different subject-specific materials to guide the student learning. The local knowledge and the enthusiasm of the Honduran Institute of Education by Radio (IHER) was also used. The experience was launched in early 2014, enhancing the educational offer in 100 rural villages.

Given the importance of the project for the development of this area of Honduras, I had the opportunity to visit some schools in October 2014. One of my visits took me to the José Trinidad Cabañas School in the Portillón community of the municipality of San Marco and the department of Intibuca. To get to this school from the capital, first we took a regular road and then, another one much more narrow and irregular, almost a bridle path. The rain season added some excitement to the trip: for security reasons, we had to stop and get out of the vehicle at various points along the way.

San Marco de la Sierra, an adjacent community to the school, is approximately five kilometers away in straight line but ten kilometers through the bridle path. The route has several mountains along the way, with an average slope of 24 degrees and with peaks that can reach 45. In the dry season, it would take students who live in the area two hours to walk to school, and two hours to go back home. Even by taking the bridle path through car or bus the trip would take 30 minutes. However, this road is closed in the rainy season and this impacts class attendance. Since the average slope of this road is 14%, it is also difficult for students to bike to school.

At the end of the road, we arrived at the school. The trip (and the back pain) was pleasantly rewarded when we saw a classroom in very poor conditions, but full of students actually studying! They were accompanied by a fully committed instructor who was following the curriculum. Since our visit, most of the parents were present, extremely grateful for the opportunity their children were enjoying. As a gesture of appreciation, we were offered the local dish: a rich indigenous chicken soup.

The success of the program has not only been registered in this village. In total, more than 2,500 students enrolled in 100 schools in 2014. Also, dropouts were very low. Schools started classes in 2015, taking new students into seventh grade and also those who were promoted from seventh to eighth grade. The government, in coordination with the IDB is evaluating alternatives to strengthen the model, improving the conditions of educational services and including information technologies.

Additionally, the Government of Honduras is aware that there are many more schools in even remoter areas, without roads or bridle paths. For this reason, local and international organizations including the IDB are looking to identify other creative ways to improve the student performance of the area and drive sustained growth solutions.