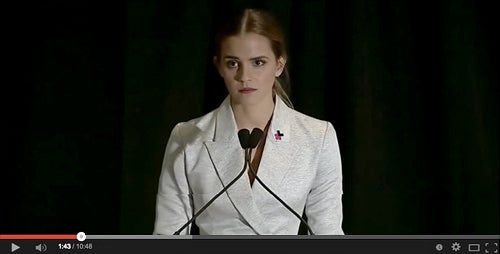 Recently, the English actress Emma Watson sent me an invitation. I know, there is an abyss between us: age, interests, backgrounds –even an ocean. But despite all of this, how can I say no to this request?

Men:  I would like to take this opportunity to extend you a formal invitation: gender equality is your issue too.

To be honest, I accepted this invitation many years ago (I’m afraid Emma Watson wasn’t even born), but I completely agree with her: “How can we affect change in the world when only half of it is invited or feel welcome to participate in the conversation?” I would like to add my voice to hers and talk about 3 areas where male involvement is crucial to achieve gender equality.

1. Men should participate as partners and parents

Women roles have changed, and today around 54% of women in Latin America and the Caribbean participate in the labor force (up from 40.6% in 1990). Currently, women in the region contribute from 30% to 60% of household income, a powerful force for lifting households out of poverty.

But men’s roles have not changed commensurately. Women are shouldering the brunt of domestic work, often negatively affecting their chances in the labor market (read more about those jugglers extraordinaire).

More involved fathers can make an enormous difference. For example, there is a positive relationship between the number of hours women work and increased earnings of their children when they become adults. More good news: look what modern attitudes about gender roles can do to your sexual life!

2. Men must be involved in sexual and reproductive health and in eliminating violence against women

As the saying goes, it takes two to tango, but men usually decide on the number and variety of sexual relationships, or the use (or non-use) of contraceptives, sometimes through coercion or violence. It is also men who often make decisions on when a pregnant woman goes to a health center.

Men have a stake in ending violence against women. Men can prevent it by not personally engaging in violence, by intervening against the violence of other men, and by addressing it´s root causes. A good example of how this can be done is Program H, which engages young men in critical reflections about rigid norms related to manhood. The message is simple: men can lead better lives if they leave machismo behind—and the women in their lives are better off too.

Unlike other areas, power is a zero-sum game: with a set number of parliamentary seats, and cabinet or board member positions, if women increase their participation, men must decrease theirs.

Some times this tension requires the passing of quotas or affirmative action. 14 Latin American countries have done so and, as a result, women’s representation has gone up from 9% in 1990 to 25%.

In the private sector, women are significantly under-represented in the governance of companies: only 20% of formal firms in the region have a female top manager, and a recent study found that women hold only 8% of executive committee positions and 5% of board positions. This study also found that companies with women on their executive committees outperformed those with all-male committees.

What can men do? What can I do?

We can support gender equality in the working place. This includes setting targets for women’s participation in the higher levels of decision making and promoting work-life balance—and then encouraging  both men and women to take advantage of this flexibility.

We can be role models. The recent domestic violence scandals in the NFL show—sadly by its absence—the importance of male leadership on violence against women. Two important issues count: men’s own conduct and their ability to install zero-tolerance policies for violence against women in their organizations.

We can be mentors. As Gemma Goudreau says, “women need powerful mentors to succeed. The majority of powerful leaders continue to be men.”

Or, even easier, we can start accepting the #Heforshe commitment and spreading the word. Are you in?