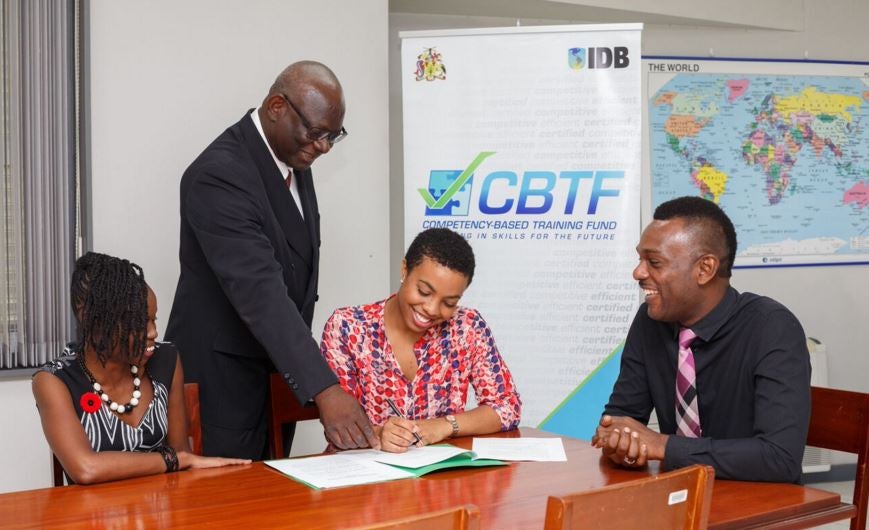 “We needed to reduce the rates of accidents during the transfer of cargo resulting from improper rigging of containers at the Bridgetown Port, the major port of entry in Barbados. By training dockers, operators, and cargo supervisors in appropriate lashing and unlashing, as well as securing cargo according to international standards, we will reduce the damage to cargo (…) and increase productivity”

The story above is one of the many that emerge from the silent revolution going on in Barbados, one that is transforming how technical and vocational training contributes to the development of the human capital and the competitiveness of this small island of 300,000 people. Behind this revolution is the Competency Based Training Fund (CBTF), an innovative scheme to finance employer-driven, competency-based training initiatives that respond to industry standards and lead to national and international certification of trainees.

The upgrading of the competencies and skills of the island’s workforce has been at the center of Barbados’ Human Resource Development Strategy (HRD) for the last five years. As a result, the central government and the IDB developed the “Skills for the Future Program”, an initiative to improve the quality and relevance of secondary education by strengthening academic core skills and “life skills”; as well as to align the supply and demand for skills by supporting an employer-driven training system. It is in the context of this program that the Competency Based Training Fund (CBTF) emerged as a way to creative productive partnerships between key stakeholders.

The CBTF’s guidelines require employers to partner with training institutions to jointly identify skills gaps and develop competency-based training modules that respond to the needs of their industries. Trainees are then assessed and certified by the national agency, the TVET Council, according to national or international standards. This is a critical change in the way training programs were designed, developed and implemented, because it promotes a closer and more continuous interaction between employers, training providers, and the external assessing/certifying public agency.

This new approach is a shift from traditional training in Barbados where providers defined the content of the training; the development of industry recognized standards and certifications was slow; and the engagement of training institutions with employers was limited.  Moreover, in-house company training by employers was scarce and short-termed, lacking a strategic perspective and the resources needed to develop competency-based standards and certifications.

Evidence of the revolutionary changes initiated by the CBTF two years ago can be seen in the size and nature of training initiatives and, more importantly, in the way in which the program has truly redefined the dynamics of interaction between actors. As of this year, more than 100 proposals in key sectors such as hospitality and tourism, energy, and manufacturing have been submitted as a result of strategic partnerships between employers and training providers.  Out of these 100, the best 25 proposals have been financed and led to the training of almost 4,000 men and women in relevant competency-based programs.

The success of competency-based training is driven by the demand from employers in the key sectors of the Barbadian economy. There is a pipeline of training initiatives underway and new cohorts of graduates need to be assessed and certified.  This has prompted the TVET Council to strengthen its capacity to not only develop new standards in record time but also to modernize the assessment process to make it more efficient.

Initial results based on data collected from both winner proposals as well as non-winning eligible proposals are promising. Results indicate that the introduction of the CBTF has produced a clear increase in the number of firms undergoing competency-based training, in the amount of resources invested in that type of training and in the number of trainees certified. In addition, feedback obtained from the various firms shows that the majority of them have a positive perception about the impact of the training on the productivity of their employees (60%) and their prospects for employability beyond the firm (60 to 80%).

A fourth call for proposals is planned for 2016, and as the program enters its next stage, the hope is that success will continue, providing evidence of the potential that better synergy between public and private sector actors can have on the effectiveness of vocational training programs and, ultimately, in the life of thousands of young men and women ready to contribute to their society. The Caribbean and the rest of the region might have lots to learn from small Barbados.