As the first wave of COVID-19 infections advances across the globe, more data becomes available that can help us better understand where we are, how we arrived here, and what may be on the horizon. This blog post explores what widely available data can tell us about how the much-cited curve of infections has progressed in different regions, and where Latin American and Caribbean countries stand as some plan to gradually reopen their locked-down economies.

Let us start by defining five stages of the wave of COVID-19 infections at the country level (Figure 1). These are largely based on the Pandemic Intervals Framework from the U.S. Centers for Disease Control and Prevention (CDC) but are constructed using publicly available data from the ongoing pandemic. 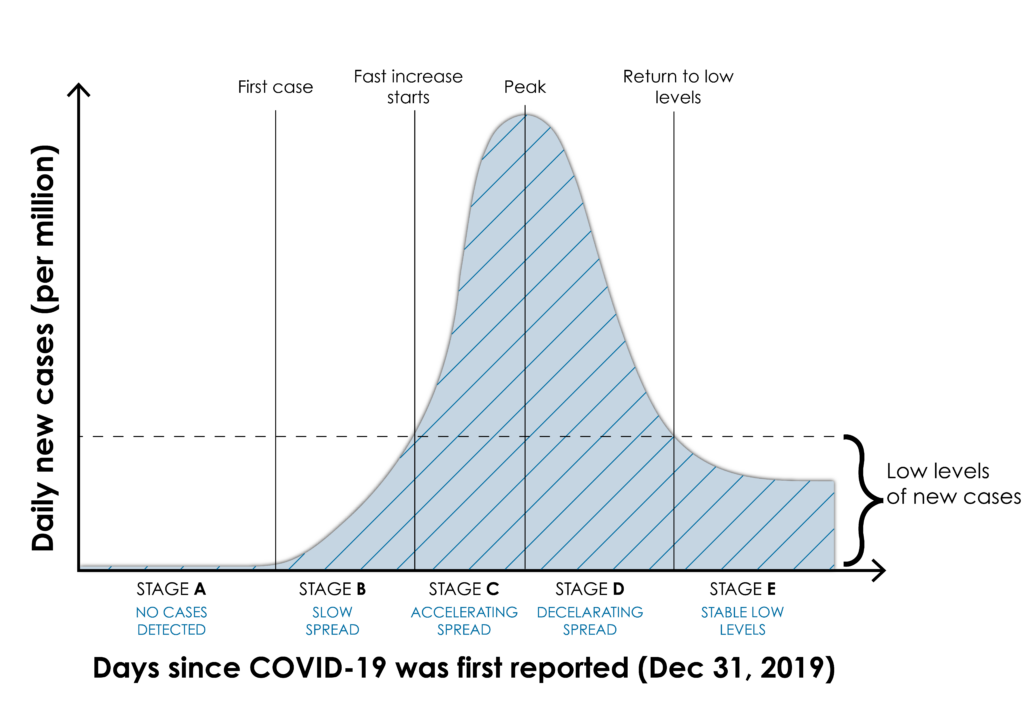 This is, of course, a highly stylized representation of reality that fails to capture a number of special cases. Moreover, the data on new confirmed cases per day have significant measurement issues. There are delays between when a case is recorded and when it is officially counted and reported. It is only possible to detect an infection if a person is tested, but tests are not widely available. And the severity of these issues varies from one country to another. Readers should therefore not think of this measure as an accurate reflection of the number of people actually infected with the virus on a given date, and keep in mind that this can affect the assessment of where a country is along the curve. However, it is one of the most readily available indicators to policymakers, and a large number of policy responses to the crisis (including the official criteria suggested by the White House for relaxing mobility restrictions after the peak of infections) have been at least partially informed by this indicator. I provide further details on how stages are identified in the data and of the limitations of this analysis in the accompanying white paper.

What Stage Are Countries Currently In?

Equipped with this framework and using data on a sample of countries with a population of 250,000 and above compiled by Our World in Data, let us look at the current state of the COVID-19 wave around the world.

As of April 29, most countries in the sample are at stages B and C (see Figure 2). Noticeably, most countries at the slow spread stage are located in Africa, with a few exceptions in Asia and Oceania. While those countries may benefit from having more information available on the virus than the first group of affected countries, the African continent faces greater challenges than others. As countries there move into the next stage of accelerating numbers, they have to grapple with scarce infrastructure, equipment, and medical personnel, and will require substantial international support to mitigate the potentially catastrophic effects of the pandemic.

In Latin America and the Caribbean, the only country that appears to still be in stage B is Nicaragua. Most other countries already find themselves in the stage of accelerating community spread, and a few appear to have passed the peak of the wave (Chile, Costa Rica, Guyana, and Peru) or even reached a stage of stable low levels of infections (Barbados and Trinidad and Tobago). While it is encouraging that some countries appear to have moved beyond the peak of the wave, it is still unclear if their new situation is stable. As recently seen in Asia, countries that appear to have reached the end of the current wave can experience further sharp surges in infections.

Figure 2. Number of Countries in Each Stage of Spread 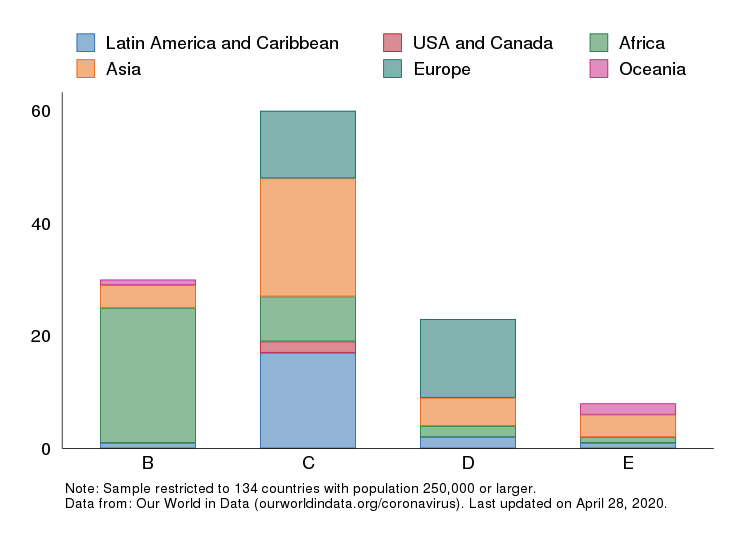 While most countries in advanced stages of the wave (D and E) are in Asia and Europe, they are still a small minority in their regions as most of their neighbors are still experiencing accelerating spread. The United States and Canada were part of that group as of April 29, but had already started seeing days of (not yet sustained) deceleration in daily confirmed cases, and seemed poised to enter stage D.

Duration of Stages Across Countries

While it is too soon to accurately characterize all stages, the data available thus far suggest that COVID-19 waves can follow very different paths. Figure 3 shows the average number of days countries from a given region have spent in each stage. The fact that countries have spent little time in stages D and E doesn’t really say very much, as most of them only progressed to those stages very recently. But the duration of the first three stages, for which there is already meaningful data, reveals clear differences across the globe.

The United States and Canada reported their first confirmed cases as early as late January, five days apart, and their curves progressed at a similar pace. In both cases, stage B lasted around 50 days, and as of April 29, they had been in stage C for around 45 days. In contrast, the average Asian country reported its first case in the second half of February, went through a shorter stage B, with an average of around 30 days, and so far, has had an even shorter stage C, although that may still change.

Figure 3. Duration of Stages around the World 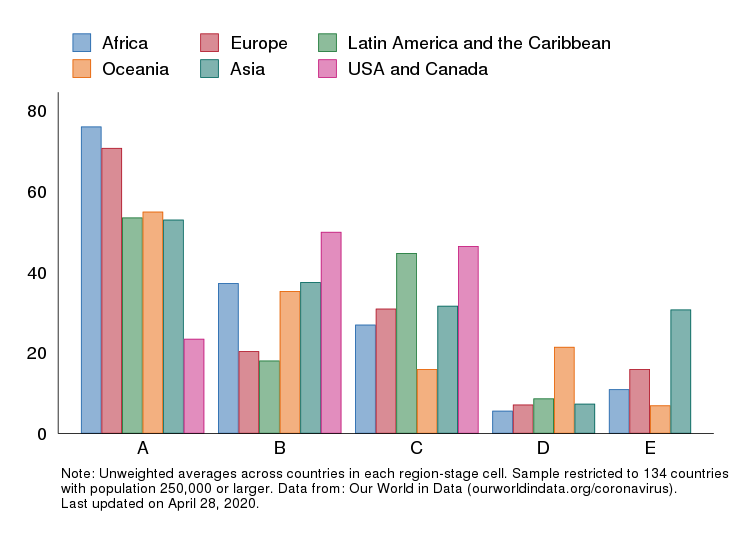 Figure 4. Duration of Stages in Latin America and the Caribbean 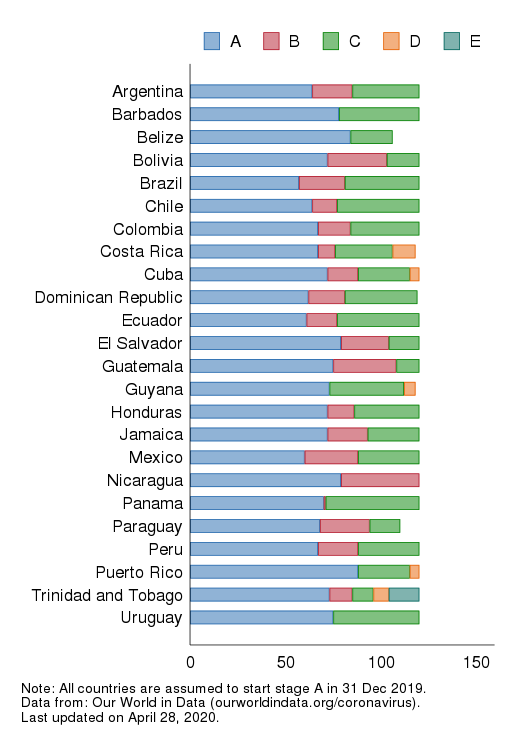 Latin American and Caribbean countries appear to have followed yet a different path. Like Asia, most experienced a brief stage B after the first confirmed case arrived relatively late. However, most countries have seen a noticeably longer stage C (see Figure 4). Compared to the United States and Canada, the first coronavirus case in the region was reported over a month later. Nonetheless, most of Latin America and the Caribbean entered stage C at around the same time as North America.

The fact that Latin American and Caribbean countries appear to have gone from their first confirmed case to the accelerated spread stage in a very short time could indicate that the virus spread faster there than elsewhere. Analysts have pointed to structural characteristics that make the region more vulnerable than others to the pandemic. Existing challenges include the fact that a large share of the urban population lives in crowded informal settlements and holds informal jobs that only allow them to live hand to mouth, making social distancing extremely difficult.

Another potential explanation is that the virus has been present in the region for longer than we know, and countries were slow to detect it. This is certainly plausible: recent evidence from autopsies in California showed that the virus had spread in the United States weeks earlier than originally thought. Even though, at the time of writing, there is no comparable evidence from Latin America, the relative duration of the stages of the COVID-19 spread can provide some clues. Across the world, as shown in Figure 5, countries that reported their first case relatively late (i.e., experiences a longer stage A) saw a shorter period of slow spread (i.e., stage B). This includes nations with different levels of structural vulnerability to the pandemic. The correlation between the duration of stages B and C is also negative but much weaker. While this is far from conclusive evidence, it is consistent with the hypothesis that, during the first couple of months of the pandemic, many countries may have only detected the virus weeks after it had begun to spread in their territories. 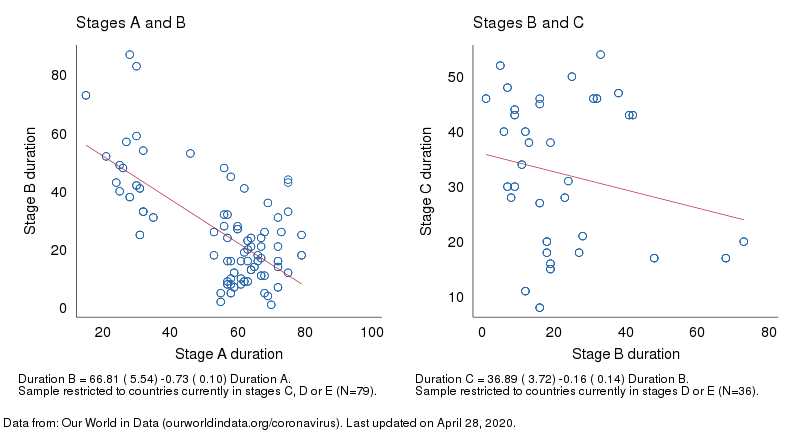 In the next blog post of this series, I will explore what policy priorities countries adopted at each stage. This can be useful as an input for forecasting the need for financial and other resources, whether for countries in the early stages of the first wave or for possible future waves.

[Editorial note: The data underlying this analysis are rapidly changing and may become outdated. You can find a version of the figures above using more up-to-date data here.]