A new coronavirus is sweeping the globe, and, as one of its by-products, deadly air pollution in many places is lifting. Consider the case of Chile.

On March 3, Chile announced its first confirmed case of COVID-19. On March 18, it declared a state of catastrophe, and by March 25, the number of confirmed cases in the country had surpassed 1,000, with nearly 60% of the cases in the Santiago Metropolitan region. In an attempt to slow the spread of the virus, the national and local governments have closed schools and encouraged teleworking. Cinemas, restaurants, bars, and clubs also have been closed and on March 22, a night-time curfew went into effect. By March 26, seven comunas of the Santiago Metropolitan area were under a mandatory quarantine.

These restrictions have upended people’s daily lives and brought most economic activity to a halt. But, over the past few weeks, Santiago also has seen a consistent decrease in carbon monoxide (CO), which is linked to vehicle traffic, among other causes (see figure 1). Residents, it seems, have been decreasing their travel, likely due to coronavirus concerns over the past few weeks, and are now complying with new restrictions on movement. 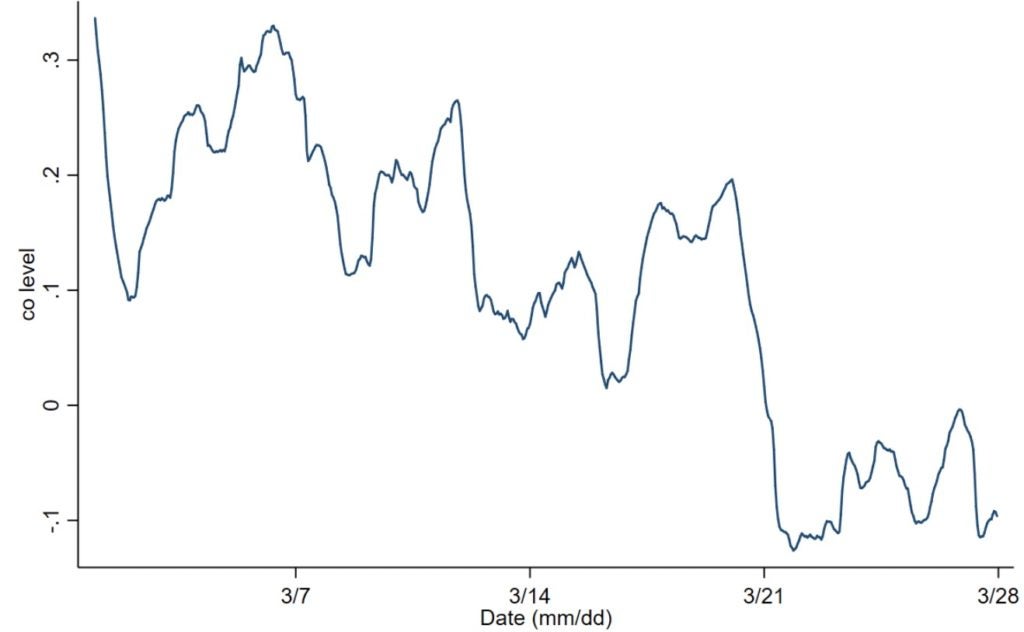 Particulate matter, linked to traffic, industry, and manufacturing, among other sources, also has been falling over this time period. Both PM2.5 and PM10 have trended downwards (see Figure 2), indicating that economic activity has diminished since early March. 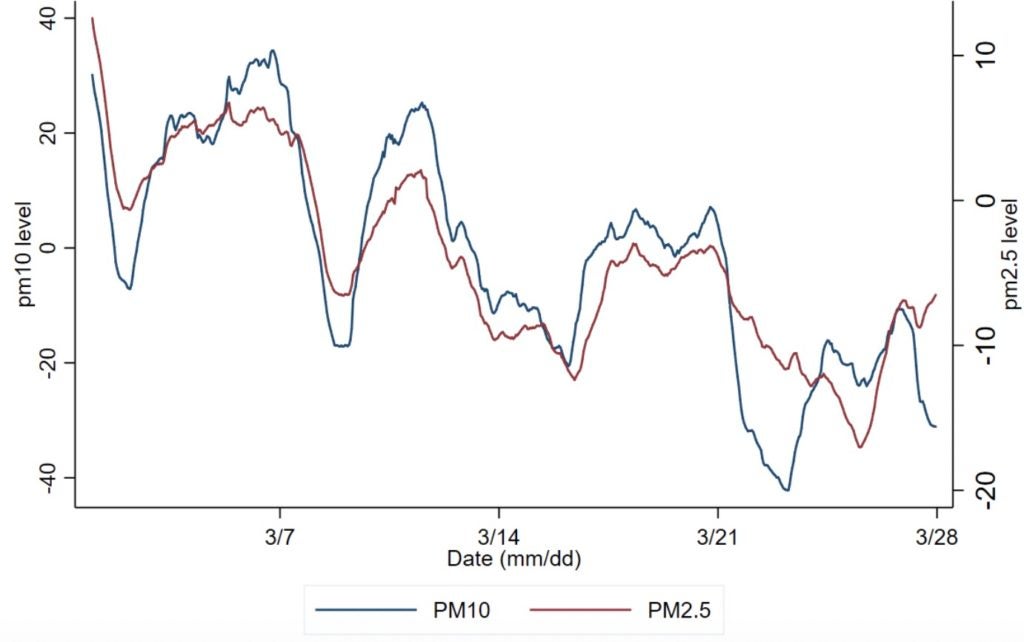 From an environmental perspective, this isn’t a cause to celebrate in and of itself. As soon as life returns to normal, air pollution levels will likely return to previous levels. But it is still good news. High levels of air pollution are associated with increases in hospital admissions for cardiovascular and respiratory conditions. In Santiago,  for example, air pollution has been shown to increase the number of visits due to lower and upper respiratory symptoms by over 10% and 7% respectively in some age groups. Some air pollutants have also been shown to increase the likelihood of hospitalization due to complications from diabetes.

Lower air pollution, particularly during the next few months when air pollution typically reaches dangerous levels, thus means fewer episodes of illness. This frees up medical clinics, supplies, and staff that are badly needed for coronavirus patients. And while those represent a fraction of the resources that will be ultimately be required, it could still make a difference.

The coronavirus represents a unique threat to the health and wellbeing of Chileans, as well as to hundreds of millions of other people around the world. At least in the short term, however, the reduction in pollution from the downturn in travel and economic activity may help some people breathe better.

María Paula Medina Pulido is a Research Fellow in the Research Department at the Inter-American Development Bank. Her research interest are development economics, gender, and environmental economics. She holds a dual bachelor’s degree in Economics and Finance and International Trade from Universidad del Rosario and is a candidate for a master’s degree in Economics from the same university.