With more than a million people infected and tens of thousands of deaths around the world, governments are taking extreme but necessary measures to contain the coronavirus, prioritizing in almost all cases some form of social isolation or distancing. But the economic costs for everyone are not the same. The disease lays bare societies’ inequalities, inflicting greater economic costs on the less economically fortunate. This is especially true in Latin America and the Caribbean, where working at home is a luxury that many poor people cannot afford, and high levels of labor informality mean that large sections of the population are excluded from government safety nets.

To its credit, Latin America and the Caribbean has not lagged behind other regions in taking the need for social distancing seriously. By early March, most countries had decided to close their schools or to severely limit their operations, and several of them had canceled events that could attract large crowds. By the third week of March, many countries, like Argentina and El Salvador, had issued stay-at-home orders and others, like Uruguay and Colombia, quarantined the elderly. Most countries in the region had declared mandatory quarantines for the majority of their populations by the end of the month. Only essential businesses like grocery stores and pharmacies were allowed to stay open and most people, except for essential workers, were expected to stay at home. These measures had an immediate impact. For the most part, people seem to have complied with stay-at-home orders, as is evidenced by the very large declines in the use of both private and public transport in the region. Figure 1 describes the types of social distance measures in different countries as of March 31

Figure 1: Social distancing in Latin America and the Caribbean 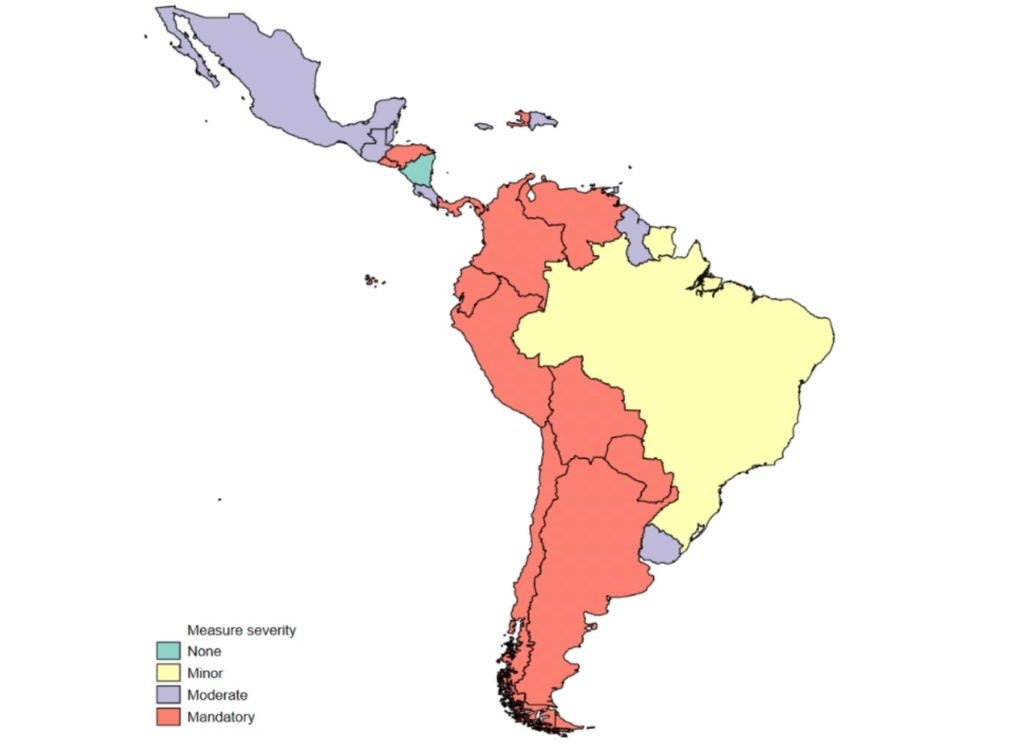 Source: Authors’ classifications based on news report from various outlets. Note: Minor: Issued instructions to not leave the house and canceled large events. Moderate: curfews at certain times of the day, closing of some non-essential businesses, forced quarantines for older people, and recommendations for the rest of the population to stay at home if possible. Mandatory: stay-at-home orders (with penalties).

The good news is that this social distancing seems to work. There is already some preliminary evidence from Wuhan that such measures have been effective at containing and delaying the pandemic. The bad news is that it is unclear whether these measures can be sustained in time. Moreover, the vast differences in economic costs faced by high- and low-income individuals are already being revealed. Two mechanisms are at play.

Not Everyone Can Work from Home

First, social distance policies require people to work from home (when that is a possibility) or to stop working altogether (when it is not). A recent study classifies occupations according to whether they can be performed from home or not and whether they require high personal proximity. The study then looks at who performs those different occupations. It finds that workers in occupations that are most likely to be affected by social distance measures, those with a low score in the work-from-home index or those with a high score in the personal-proximity scale (like retail, construction, and restaurants), are more likely to be done by economically vulnerable workers: workers with fewer years of education, with limited healthcare, and with wages towards the bottom of the income distribution.

Moreover, even when working in a sector or firm that encourages work from home, low-income workers may be much less able to do so. That is because of the housing conditions and infrastructure available to them. Many low-income workers, for example, may not have personal computers. They also probably live in more crowded conditions. Some 2.5 people share a single room among low-income households (those in the first income quintile) in Latin America, compared on average to 1.3 people for households in the top quintile. That, to begin with, makes conditions more dangerous for the poor than the rich.

Second, in developing countries, irrespectively of the type of occupation, informal working arrangements makes it harder for the poor to shelter at home. Many workers have no access to sick leave or unemployment benefits, precarious access to health benefits, and inexistent or extremely limited savings. The vast majority of informal workers live hand-to-mouth.  Less than 15 percent of the households in the bottom half of the distribution of income in Latin America, for example, have savings to cover emergency expenses, and most of these households’ members are engaged in some form of informal activity. In the absence of strong income sustaining policies, many of these workers will find that staying at home is an unaffordable option. This problem has already been recognized in several commentaries (here, and here for example) but, how much informality is really out there?

Consider two indicators of employment informality. The first one considers informal workers as those employees who do not have access to health or pension benefits through their jobs. Informality is not a synonym of illegality (this will depend on each country’s legislation). It is  however, an indicator that describes a precarious condition in which a worker does not have access to basic services or job security. A second indicator of informality is the share of self-employed workers who have less than tertiary education. According to these measures, almost half of the workers in Latin America and the Caribbean are informal (Figure 2); about a quarter of them are employees without access to health insurance or a pension, and some 24 percent are self-employed without a tertiary degree. Of course, there is tremendous variation across countries. In Bahamas, Chile, Costa Rica, and Uruguay, less than a third of workers are informal. In Bolivia, Nicaragua, Peru, and Paraguay, more than two-thirds are. None of these workers are well prepared for a sustained lockdown.

Half of Latin American households are fully informal

The severity of the problem is even greater when considering that in Latin America, as in most other places in the world, assortative mating exists. This is the name that economists give to the phenomenon by which people choose to marry people similar to themselves, in terms of education level, ethnic background and other characteristics, including the propensity to be informal. If primary earners in a household were formal, and second or third earners were informal, the household would still have some form of automatic stabilizer during a temporary lockdown. They would also be more likely to have, through the primary earner, health insurance coverage. Unfortunately, this is typically not the case.

Figure 3 shows the share of households that do not have any members working in the formal sector almost mimics the share of informal workers: 46%. In poorer countries, like Bolivia, El Salvador, Honduras, and Nicaragua, this share is above 60%. But even in upper middle-income countries like Paraguay and Peru two-thirds of households are informal. These numbers are staggering.

Informality is a classic example of how social distance policies affect high- and low-income households differently. The share of households without any formal worker is typically twice or even three time larger in the lowest household income quintile than in the highest (Figure 3). In many countries, over 95% of the first quintile is composed of households in which all members are either not working or working informally. To be sure, some of these poor households are beneficiaries of some of the programs already in place, for example conditional cash transfers, but we know those have important coverage issues and are not particularly well-designed to deal with profound but (hopefully) temporary shocks like this pandemic. Many governments in the region have already recognized the need to help these families through increased transfers, and emergency programs are being put in place.

But there is no doubt that the coronavirus epidemic is already revealing how deep-seated inequalities and the persistence of informality makes Latin America and the Caribbean weaker in its ability to respond to extreme shocks, including those related to disease. In a follow-up blog post we will discuss the steps the region is taking to protect the income of informal workers and assess how appropriate they are to prevent a full-scale humanitarian crisis in the region.