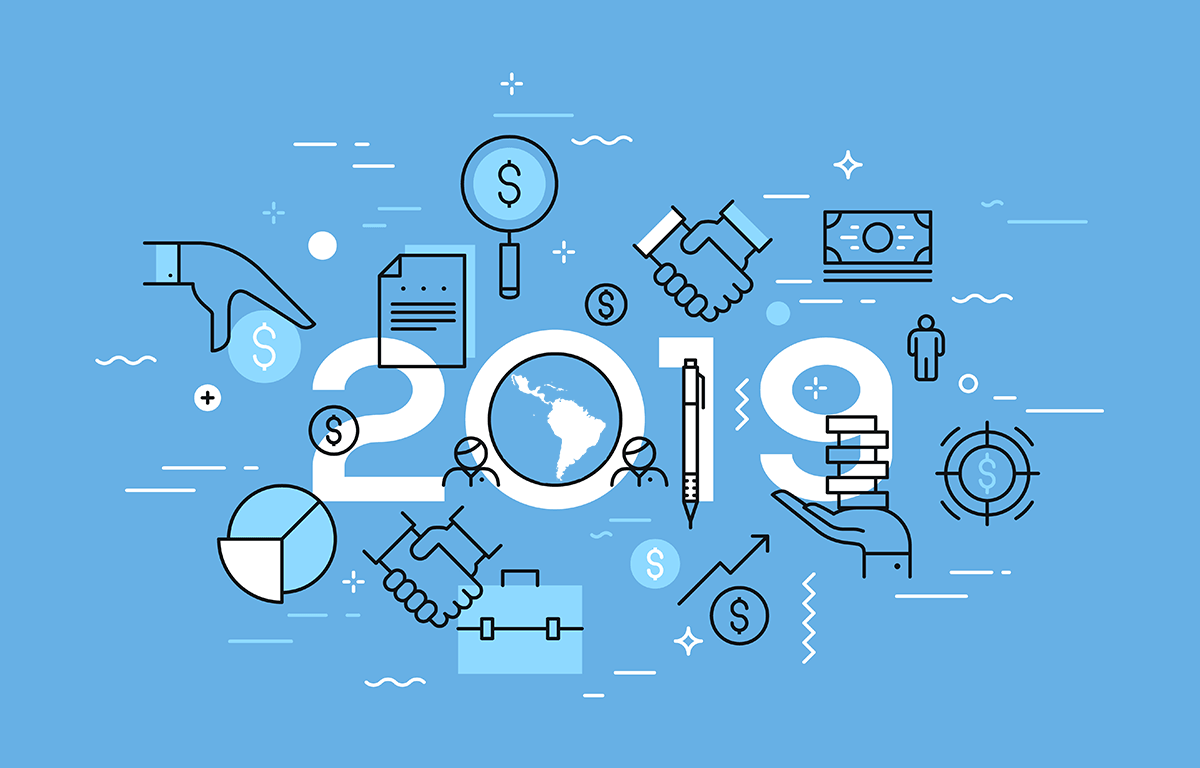 The outlook for the global economy has shifted from a situation of healthy, broad-based growth across the larger economic blocks to a more nuanced view of growth perspectives, with substantial risks clouding the horizons. Considering the 12 months from 2017 Q3 to 2018 Q3,  growth in the United States was 3% but many suggest that this relatively high rate will fade through 2019 as fiscal stimulus subsides, falling growth rates in other parts of the world impinge on the US, and interest rates rise to ensure that wage inflation does not feed into prices and threaten the 2% inflation target. In China, growth has been slowing as the economy rebalances away from one dominated by exports and investment  towards a greater share for consumption. In Europe, growth of around 2.4% this year is expected to drift down to about 2.2% for 2019.

Growth in Latin America and the Caribbean is driven by global trends, domestic factors and their interaction. Unfortunately, growth in the region will be the slowest of all the major regions this year expected at just 1.2%, down from the 1.6% expected back in July. This downgrade is largely due to weaker growth in Argentina (which will experience a significant recession this year) and Brazil (with slower positive growth) while the regional average is dragged down by the situation in Venezuela which  remains in a major economic crisis. Growth is expected to rise in the region as a whole, but only to 2.4% in 2019 – see Figure 1.

But these regional figures hide wide differences across countries. Indeed, the dispersion of income levels has been on the rise – see Figure 2 which plots GDP per capita in dollars (at current prices) for a selection of countries. One group of high performers (Chile, Panama and Uruguay) all exceed GDP per capita at current prices of US$16,000 as of 2018 and are expected to have GDP per capita of around US$20,000 by 2023. A second group has seen progress in this indicator but starting from a lower base (including the Dominican Republic, Paraguay and Peru). In the case of Peru, GDP/capita is expected to be almost US$9,000 in 2023 while it was just over US$6,000 in 2015 – and just US$2,000 in 2002. 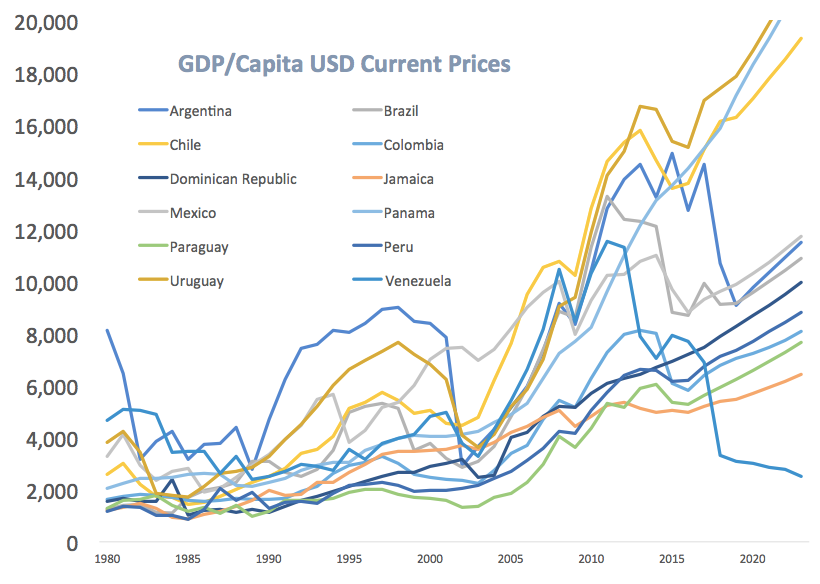 The impact of different crises

The Venezuelan crisis is starkly evident by this measure. By the end of 2018, Venezuelan GDP per capita will have fallen by more than 70% from its peak of US$11,500 in 2011 to just US$3,300.  The case of Jamaica is also worth noting. In 2010, Jamaica had GDP/capita of about US$4800 but suffered a serious fiscal crisis that reprofiled domestic debt. GDP/Capita in 2018 stands at US$5400 reflecting steady progress. What is remarkable is that this was achieved while running a primary fiscal surplus of about 7% of GDP each year with debt falling from 140% to around 100% of GDP. This must stand as one of the most successful programs of reprofiling and fiscal consolidation to date.

Each indicator has its pros and cons. GDP per capita in dollars at current prices indicates spending power using a standard global measure but ignores local prices. An alternative to see how countries have fared is to consider how each economy’s output (GDP) in dollars has moved but using what are referred to as Purchasing Power Parity adjusted exchange rates. Roughly speaking this means adjusting actual exchange rates to what might be considered an equilibrium level given prices in each country and those in the US. One way to then compare across countries is to see how each country’s share of global output has changed according to this measure. But the shares vary widely, so to ease the exposition I have normalized the share of each economy to be equal to 1.0 in 1980 – see Figure 3.

There are substantial risks to these projections. The US stock market has fallen significantly from its September 2018 peak, perhaps reflecting the expected fall in growth but also amid uncertainty regarding the relatively open global trading system and the ongoing process of monetary normalization. In Europe, concerns regarding the Italian fiscal position weigh on markets as does Brexit. For China there are risks to the gradual transformation of the economy particularly deriving from the debt positions of some state institutions and if global trading rules change.

The countries that have been most successful in navigating global shocks have been those that have maintained economic stability  keeping fiscal deficits, debt levels and inflation in check. Many countries in Latin America and the Caribbean suffered due to the interaction of international shocks and domestic vulnerabilities.

Panama is an exceptional case where growth has been boosted due to significantly higher investment levels including in infrastructure. But as reviewed in the 2018 Latin American and Caribbean Macroeconomic Report, to boost regional growth, investment needs to be both greater and more productive. The 2019 Report to be published in March will consider how countries can maintain economic stability while confronted with higher global interest rates and a possible fall in capital flows while also focusing on how infrastructure investment can be boosted and how such investments may be selected to have the greatest impact on output.