The coronavirus threatens to cast a shadow of death and illness wherever it goes. To fight it, experts recommend “social distancing”—that is, that people avoid interacting with each other and stay in their homes. The governments of Latin America are promoting social distancing using a variety of measures. But have they been successful?

We looked at Google web search data for clues. If lots of people stay in their homes, we should see an increase in certain searches—such as “Netflix”—and a corresponding decline in other searches, such as “movie theater” or “restaurant.”

Is this what we are seeing in Latin America? The results show that as of last Friday (13 March 2020), Internet search trends had changed little. However, there was an abrupt shift over the weekend. Basically, searches for “Netflix” have exploded, while searches for “movie theater” and “restaurant” have dropped sharply. This would appear to suggest that social distancing is on the rise in Latin America, which is good news.

We can use as a point of reference what is happening in the global epicenter of the pandemic: Italy. The following illustration graphs Google searches between January 19 and March 15 (the latest data available). The blue line tracks searches for “Netflix,” while the red line tracks “cine” and the yellow tracks “ristorante.”

The pattern is clear: searches for “cine” and “ristorante” are relatively steady (with spikes over the weekends) until 21 February. But that was the day on which official coronavirus cases jump from 3 to 20, and we can see that these searches suddenly began to decline, plummeting after 8 March. That was the day the Italian government ordered people to stay home, first in the Lombardi region and then throughout Italy, severely restricting the movement of persons. At the same time, searches for “Netflix” were relatively steady during the period in question, but began to climb rapidly on March 7, rising to more than double the average by the end of the period.

The story in Spain is similar, and in fact even more dramatic. Searches for these terms remained stable (with spikes during weekends) until 9 March. At that point, searches for “cine” and “restorante” fall sharply, and several days later, searches for “Netflix” soar, rising 200% above the average for the period. This sharp jump in searches for “Netflix” can help explain why the previous Sunday, telecommunications companies issued a press release asking that people save their Internet connections for telework and study, rather than use them for video games and for streaming TV shows and movies. 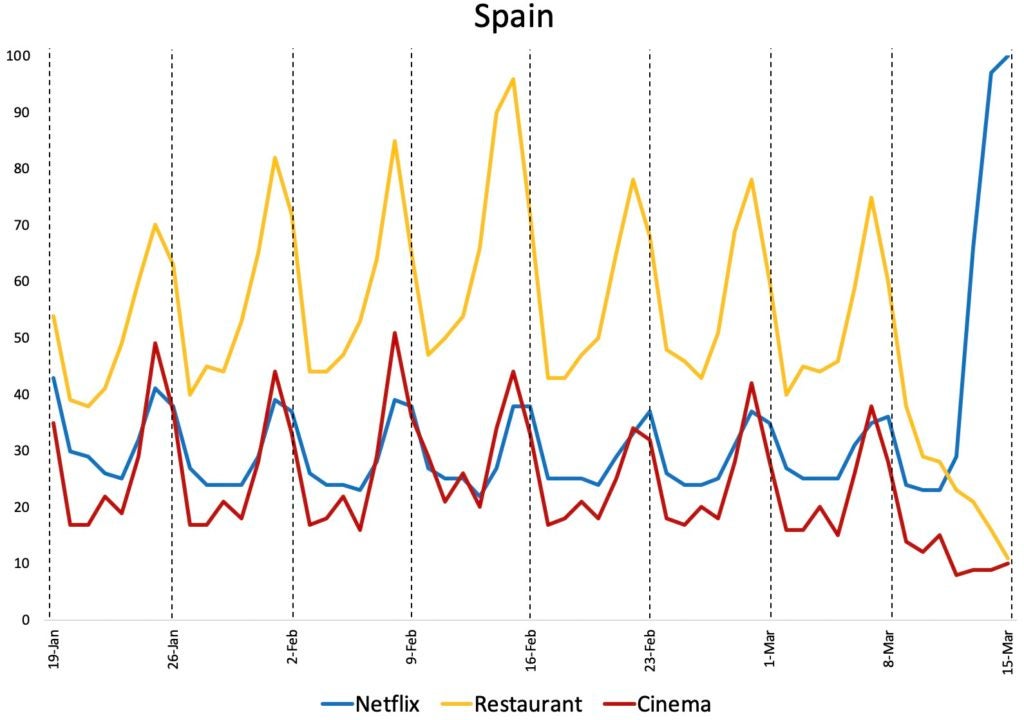 Now let’s look at what’s happening in Peru. Peru’s graph shows web search trends remaining relatively stable. But by the end of last week, searches for “Netflix” had shot up, with searches for “cine” and “restaurante” collapsing. These are basically the same patterns seen in the aforementioned European countries, although quantitatively, the changes were not as dramatic and tended to lag. 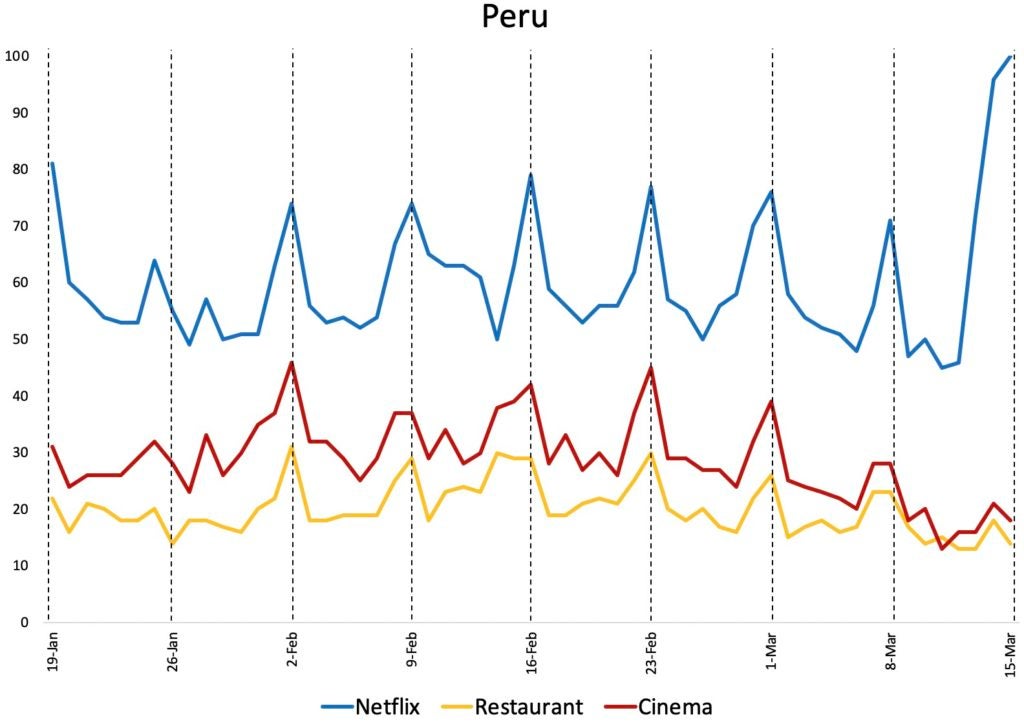 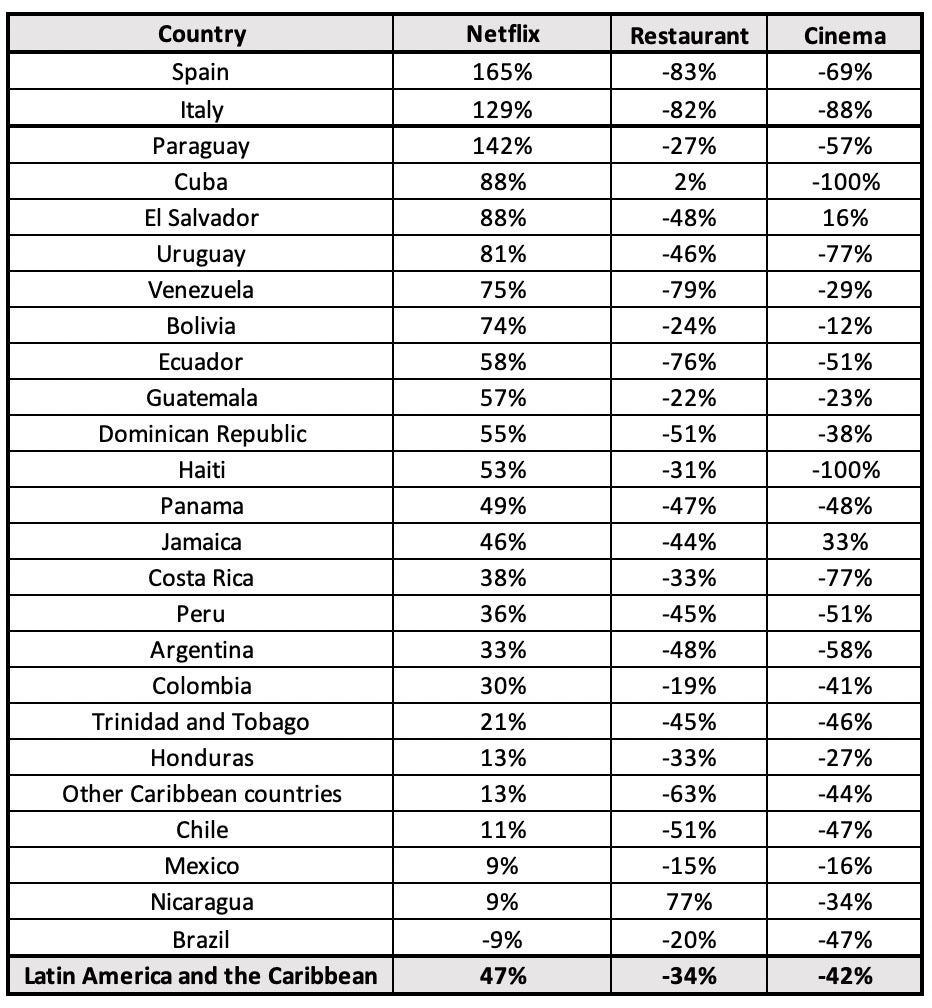 To see what happened in your country, click here .

Of course, this analysis has its limitations. The number of web searches can be an important indicator, but it is only an indirect way of gauging the movement of persons. In future blog posts, therefore, we will continue to monitor the critical phenomenon of social distancing by going into more in-depth analysis using other data sources, including Twitter, Waze, and cell phones, as well as exploring what is happening in other parts of the world.

Also, the situation may change rapidly, as governments implement more drastic measures. On March 16, Peru declared a state of emergency restricting the right to freedom of movement and ordered the closure of shopping centers and other businesses, with the exception of supermarkets, banks, and pharmacies. We will thus continue to update this analysis on an ongoing basis over the next few days.

If you have any suggestions as far as the data or analysis, or if you would like to contribute to this initiative, please don’t hesitate to write us. The only way to beat the coronavirus is by joining forces and fighting it together.

[Editor’s note: Thanks to Xiomara Pulido and Paula Bonel for their excellent help with this post.]