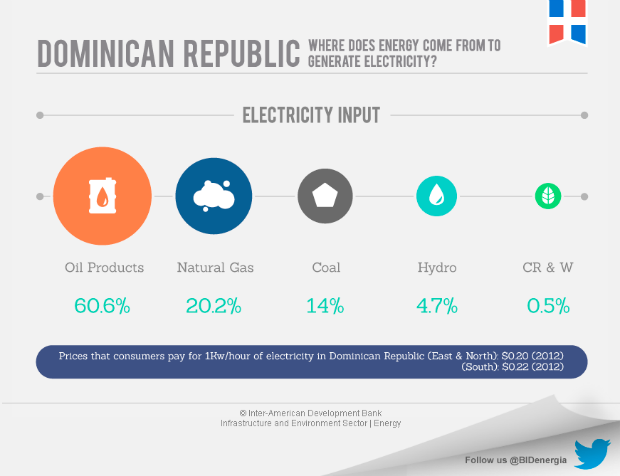 With a gross domestic product (measured at PPP) of USD 90 billion and a population of 10.3 million people, the Dominican Republic is the largest economy in the Caribbean and has the largest population after Cuba. Its energy matrix is dominated by the import of fossil fuels as primary sources (crude oil, natural gas and coal) and as secondary sources (products derived from crude oil). Domestic sources of energy include biocombustibles – mostly firewood and some bagasse – and hydro.

Electricity coverage is above the Latin American average, at around 96%. According to OLADE, the Dominican Republic has around 3,000 MW of installed capacity for electricity generation. This generation capacity is mainly thermoelectric with 2,469.23 MW (82.5% of the installed total). It is important to note that there has been significant growth in installed capacity of plants using coal and natural gas in recent years. The rest is mostly made up of hydroelectric ge­neration at about 525 MW. This capacity is used to generate about 15,000 GWh per year.

The economy consumes around 115 thousand barrels of oil equivalent per day broken down by oil products (54%) for transportation purposes, firewood (23%) mostly in residential consumption, and electricity (20%) for the industrial, residential and commercial sectors

The National Energy Commission (CNE) is responsible for designing policies and is the main public agency involved in the Dominican energy sector. In the hydrocarbon subsector, regulation is the responsibility of the Ministry of Industry and Commerce (MIC). In the electricity subsector, the re­gulatory body is the Superintendency of Electricity (SIE).

The most important participant in the electricity subsector is the Dominican Consortium of State Electricity Companies (CDEEE), which includes the only transmission company, the three distribu­tion companies, the monopoly on hydropower (with an installed capacity of 525.5 MW) and the only completely public thermal generation company (1.9 MW). The rest of installed capacity (ther­mal generation) is distributed among 12 private and mixed companies (the State has a 49% share) that have an installed capacity of 2,434.2 MW, which represents 82.3% of the total in the National Interconnected Electricity System (SENI). Electricity rates to final consumers are fixed monthly by the superintendence.

In the hydrocarbon subsector, the State participates in 51% of the only refinery in the country REFI­DOMSA, which has a capacity of 35,000 bbl/day and supplies approximately 25% of the local fuel demand. Private companies control transport and marketing. Fuel sale prices are fixed weekly by the MIC.

Energy sector policies are currently defined by the National Energy Commission (CNE), created in 2001 by the General Electricity Law. The commission is headed by the Secretary of Industry and Commerce and includes several secretaries of State such as Finance, Agriculture, Environment, the governor of the Central Bank and the director of the Dominican Institute of Telecommunications.

The CNE is responsible for developing and coordinating projects of legal and regulatory rules, propo­sing and adopting policies and standards, preparing indicative plans, proposing them to the Execu­tive and ensuring compliance, promoting investment decisions in coordination with those plans and advising the Executive.

Following the guidelines of the General Electricity Law, in 2004 the CNE presented the National Energy Plan (PEN) 2004-2015. The PEN defines energy policies in the country until 2015. The main objectives are: 1. To ensure the security and efficiency of the supply; 2. To promote efficient mana­gement of demand and rational energy use; 3. To develop national energy resources; 4. To reduce energy system vulnerability and external supply; 5. To increase coverage and improve the quality of energy service in rural and semi-rural communities; 6. To provide an appropriated institutional, legal and regulatory framework.

In the Dominican Republic there is no agency dedicated to regulating the whole energy sector. The Superintendency of Electricity (SIE) was created to regulate the energy subsector (General Electricity Law). In the hydrocarbon subsector, the main agency in charge of regulation is the Ministry of Indus­try and Commerce (MIC), which controls the Hydrocarbon Directorate, the Directorate of Rules and Systems Quality (DIGENOR), the Specialized Body of Fuel Control (CECCOM) and the General Direc­torate of Mining. In this subsector, however, other State institutions participate in regulation like the Ministry of Finance, the SIE and the Ministry of Environment and Natural Resources, among others.

The Superintendency of Electricity (SIE), like the CNE, was created by the General Electricity Law in 2001. Its creation includes an autonomous body with its own assets that has a directory whose members are nominated by the CNE and must be ratified by the National Congress.

The Ministry of Industry and Commerce (MIC) through the Directorate of Hydrocarbons is partially responsible for regulating the hydrocarbon subsector in the country. Its main functions include esta­blishing weekly fuel prices and monitoring the implementation of policies and regulations that govern the hydrocarbon market. In addition, under the MIC is the Directorate General of Rules and Systems Quality (DIGENOR), which is responsible for controlling fuel quality and the Specialized Body of Fuel Control (CECCOM), which was created to enforce regulations related to security and control in the process of fuel distribution and marketing.

Other State institutions also have some regulatory activities in the hydrocarbon subsector. Among those are: (i) the Ministry of Finance and its Directorate of Customs and the Department of Fuel Control; (ii) Ministry of Environment and Natural Resources; (iii) Dominican Oil Refinery; (iv) Central Bank, in the sub-department of importing petroleum and its derivatives; (v) the Dominican Electricity Corporation; and (iv) the Superintendency of Electricity.