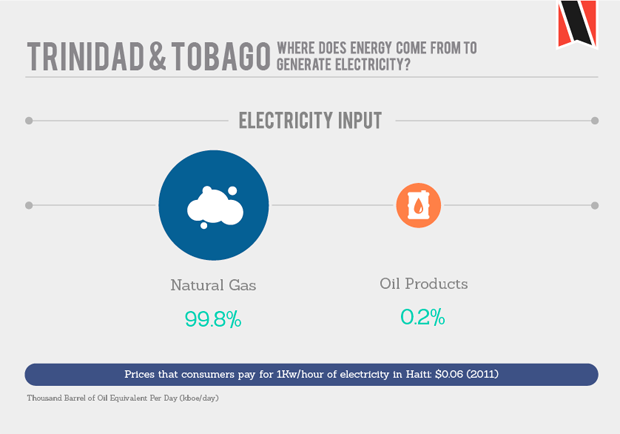 Trinidad and Tobago are the southernmost of the Caribbean islands and are located just seven miles off Venezuela’s north-eastern coast. It is home to a population of 1.32 million people. Trinidad and Tobago’s economy is highly dependent on the energy sector which accounts for 45.3 percent of national GDP (2011), provides 57.5 percent of government revenue and is responsible for 83 percent of merchandise exports. It however employs only 3 percent of the overall work force. (International Monetary Fund, 2012; Ministry of Energy and Energy Affairs, 2012; Ministry of Planning and the Economy, 2012) In contrast to most other Caribbean states the tourism sector plays a minor role, contributing only around 1 percent to the national GDP.

Trinidad and Tobago’s energy sector is dominated by gas production and the island state is among the five largest exporter of liquefied natural gas (LNG). (NGC Trinidad & Tobago, 2013) Until the large-scale development of shale gas in the United States, Trinidad & Tobago supplied 60 percent of American LNG imports. (Johnson, 2011) Gas production has come to the forefront since the decline of the oil sector started in the 1980s and today gas accounts for almost 90 percent of the energy sector. The largest companies operating in the sector are BP Trinidad and Tobago, British Gas and EOG Resources Trinidad. Together they account for about 95 percent of production. The majority of gas production, 57 percent, is exported in the form of LNG with the rest used domestically in the petrochemical industry (28 percent), the electricity sector (8 percent) and other (7 percent). (Castalia Consulting, 2011; Johnson, 2011).

In addition to natural gas, Trinidad and Tobago produce about 80,000 barrels of oil per day (2012) of which 20 percent are consumed domestically, including for the transportation sector. Total proven reserves stood at 446.7 million barrels in 2013. (Petrotrin, 2013)

Electricity generation in 2010 stood at 8,485 GWh of which 98 percent was produced from gas turbines and the remaining two percent from medium speed diesel plants. Total generation capacity stands at 1,761 MW of which 1,503 MW come from gas turbines, 236 MW from combined cycle turbines and 22 MW from a medium speed diesel plant. An additional 720 MW combined-cycle plant was supposed to come online in stages by mid-2012, but according to Ministry of Energy and Energy Affairs this has not yet happened.

Overall energy and mineral policy, which includes the oil, gas and electricity sector, is set by the Ministry of Energy and Energy Affairs. Under the Petroleum Act (1969), the Petroleum Regulations (1970) and the Petroleum Taxes Act (1974) the ministry is responsible for monitoring and regulating the energy and mineral sector as well as issuing licenses for exploration and production. The ministry also decides which areas are made available for exploration and production and receives applications for the competitive bidding process. The Environmental Management Act No.3 of 1995 established the Environmental Management Authority (EMA). Under this new law companies involved in the exploration and production of natural gas must secure a certificate of environmental clearance (CEC) as part of the permit process. Decisions by EMA can be appealed at the Environmental Commission a Superior Court of record. (Environmental Management Authority, 2013; Renewable Energy & Energy Efficiency Partnership, 2013)

The National Gas Company of Trinidad & Tobago (NGC) was established in 1975 as a incorporated and fully government-owned state-run company. NGC “operates in the midstream of Trinidad & Tobago’s gas industry and “purchases, compresses, transports, sells and distributes.” It is the sole buyer and seller of gas in Trinidad and Tobago and purchases whatever share of natural gas is not exported in the form of LNG to market it to T&TEC, the petrochemical industries and other consumers. (NGC Trinidad & Tobago, 2013)

Petrotin, the country’s largest producer of oil and operator of the sole petroleum refinery, is a state-owned enterprise and the country’s only fully integrated oil company working in exploration and production of both on-shore and off-shore fields, as well as refining and storage. (Ministry of Energy and Energy Affairs, 2013) It was incorporated in 1993 and combined the operations of Trinidad and Tobago Oil Company Limited (Trintoc) and Trinidad and Tobago Petroleum Company Limited (Trintopec). It underlies direct control of the Minister of Finance. (Petrotrin, 2013a) In 2012 Petrotrin produced 44,000 barrels per day and operated a refining capacity of about 168,000 barrels per day with an average throughput of 127,650 barrels per day. Total capacity exceeds domestic production of crude oil and to fill excess capacity the company purchases crude oil from other countries. (Petrotrin, 2013b) In addition Petrotrin produced 167 million cubic feet of gas per day. (Petrotrin, 2013c)

The electricity sector is dominated by the state-owned utility company Trinidad and Tobago Electricity Commission (T&TEC) which is responsible for operation and maintenance of all of the country’s transmission and distribution lines and is also the sole power generator on the island of Tobago. Until 1998 T&TEC operated as a vertically integrated utility company holding a monopoly on generation, transmission and distribution of electricity.

Ministry of Planning and the Economy. (2012). Working for Sustainable Development in Trinidad and Tobago.