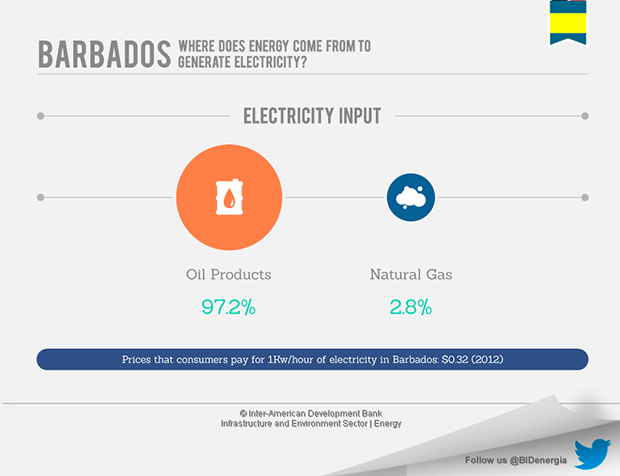 Barbados is an island state in the Lesser Antilles located about 180 km east of St. Vincent and the Grenadines. Barbados has a population of 284,000 people living on just 431 square kilometers, making it one of the most densely population islands in the world. Around 25 percent of Barbados’ population live in the capital Bridgetown.

The Barbados National Oil Company Ltd. (BNOC) produces about 1000 barrels of crude oil per day from a number of on-shore wells in the Woodbourne area located in the southeast part of the island. As the country does not possess any refining capacity crude oil is shipped to Trinidad and Tobago for processing and the refined product is subsequently returned to the island. As domestic production supplies only about 15 percent of the total energy need, the majority of the energy supply is imported.  (Castalia, 2010; Williams, 2010)

In addition to its crude oil production Barbados also produces about 500 barrels of oil equivalent per day of natural gas used for domestic consumption by its approximate 20,000 residential and commercial customers. The natural gas network is owned and operated by the National Petroleum Corporation (NPC) which receives the natural gas from BNOC. (Castalia, 2010; Williams, 2010)

Barbados Light and Power (BL&P) is the only utility company generating and feeding electricity into the national grid. A number of large customers, however, produce electricity for self-consumption. BL&P’s capacity is 239 MW and accounts for 92% of total generation capacity. Generation consists primarily of low speed diesel generators (113.5MW) and gas turbines (86MW). The country’s electrification rate is 100 percent and BL&P supplies electricity to 119,000 customers. The prevalent use of low speed diesel generators allows for better than average efficiency rates. As a result, Barbados’ loss rates are below even those of St. Vincent and the Grenadines and Dominica which both feature more efficient hydro power in the electricity mix. (Castalia, 2010; Williams, 2010; World Bank, 2010)

However, as with most oil import-dependent electricity generation, prices fluctuate according to world market prices. About two thirds of BL&P’s operating expenses are directly related to the cost of imported oil products. With rapidly growing oil prices, electricity prices rose 75 percent from 0.08 US$ kWh in 2004 to 0.14 US$ kWh in 2008. Electricity consumption is dominated by the commercial sector where 41 percent of all electricity is consumed, followed by residential at 32 percent and industrial with 27 percent. (Castalia, 2010) The 84 hotels and guest houses account for almost 10 percent of total electricity sales. (Duffy-Mayers, 2010)

The Energy Division within the Ministry of Finance, Investment, Technology and Energy (MFIE) is responsible for monitoring and regulating the overall energy sector. It was established in 1978 as part of the Ministry of Trade. The Energy Division develops, implements and enforces energy policy. Its is responsible for the issuing of licenses and leases for all oil exploration and production, it promotes the use of renewable energy and it advises on the pricing of petroleum products. The Division is tasked with monitoring BNOC, NPC and the Barbados National Terminal Company Ltd. (BNTC) BNOC is tasked with exploration, production and procurement of oil and gas, NPC is the national distributer for all gas produced by BNOC, and BNTC is “responsible for the terminalling and storage of oil products and crude oil.” (Government of Barbados, 2013)

The legislative framework of the energy sector is organized around three regulatory acts: the Electric Light and Power Act, the Fair Trading Commission Act and the Utilities Regulation Act. (Fair Trade Commission Barbados, 2012) According to this legislation, Barbados Light & Power Company Limited (BL&P), a vertically integrated utility company, is the sole producer of electricity for the national grid. It holds the mandate for generation, transmission and distribution of electricity. The law provides an exception for residential self-generation and consumption. Apart from changes in shareholder structure and corporate organization BL&P remains unchanged since before 1909. Ownership is split between the U.S.-based corporation Leucadia National which holds 37 percent, Barbados National Insurance Board which holds 23 percent, and about 2,800 private Barbadian shareholders which hold the remaining 40 percent. (Castalia, 2010; Renewable Energy & Energy Efficiency Partnership, 2012; World Bank, 2010)

The Fair Trading Commission Act 2001 established the Fair Trading Commission (FTC) which regulates BL&P. The FTC functions as a government regulatory body responsible for, among other things, regulating electricity rates and stipulating the standards of service. It is an government body and its operating structure and procedures ensure that it operates independently. (Renewable Energy & Energy Efficiency Partnership, 2012)

Fair Trade Commission Barbados. (2012). Renewable Energy, Where Are We ? Retrieved from http://www.ftc.gov.bb/index.php?option=com_content&task=view&id=212&Itemid=26

Williams, P. (2010). Fundamentals Of The Energy Sector In Barbados, (August). Retrieved from http://businessbarbados.com/industries/energy-and-utilities/fundamentals-of-the-energy-sector-in-barbados/