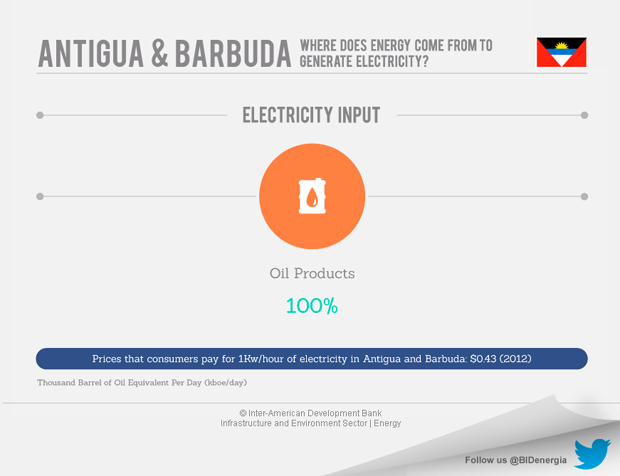 Antigua and Barbuda is a two-island state located in the Eastern Caribbean, home to a population of 82,000 people. It is the wealthiest of the Eastern Caribbean states and also has the highest per capita consumption of electricity. The national economy is dominated by the tourism industry which accounts for more than half of the GDP, followed by investment banking and financial services.

Energy and Electricity: 100% of Fossil Fuels imported from abroad

Antigua and Barbuda does not have any known fossil fuel resources and almost 100 percent of energy resources are imported in the form of oil products. Antigua and Barbuda spends about 12 percent of its GDP on energy, the highest share of all states in the Eastern Caribbean. The import of oil products consumes about one-third of the country’s foreign exchange. To offset the rising cost of energy the government announced a pass-through pricing system in August 2009 to raise prices and end a period of subsidized fuel prices. Following this change in policy energy costs for gasoline, diesel and propane have increased significantly and are now more in line with prices in other East Caribbean states. (Government of Antigua & Barbuda, 2010; World Bank, 2010)

Apart from a small number of off-grid solar photovoltaic (PV) systems, electricity is provided by eight power plants using either high or low-speed diesel engines with a net capacity of 83 MW. This means that 1 MW is enough electricity to power an average of 240 to 400 homes. Three stations are operated by the Antigua Public Utilities Authority (APUA) with the other five operated by one Independent Power Producers (IPP), the Antigua Power Company Limited (APCL). (Claude Davis & Associates, 2010) In 2009, base load stood at 42 MW and peak load reached 50 MW. APCL’s capacity alone reaches 44 MW and it is able to produce electricity significantly cheaper than APUA which helps to explain why the majority of electricity is produced by APCL and subsequently purchased by APUA. The relationship between APUA and APCL has been complicated by lack of payment as a result of which APCL temporarily suspended power generation in October 2012. (APUA, 2012) In 2013 APCL won a six-year legal battle against Antigua’s government and APUA concerning a failed multi-million dollar contract to supply the country with 50.9 MW of electricity.(Lord Neuberger, 2013) In 2009 total net generation was about 326,383 MWh. The commercial sector consumed 101,818 MWh of electricity accounting for 48 percent of overall consumption, the domestic sector consumed 87,887 MWh representing 40 percent followed by the governmental sector with 6,290 MWh equaling 8 percent. These figures do not include street lighting. Technical losses during generation, transmission and distribution stood at 24 percent. (Castalia Consulting, 2012; Government of Antigua & Barbuda, 2010)

Overall energy policy, including standards for renewable energy technologies, is developed and enacted by the Sustainable Energy Desk which is part of the Office of the Prime Minister. The desk was established in 2010 together with the National Energy Task Force which is responsible for developing the National Sustainable Energy Policy (NSEP). There does not exist an independent regulatory agency in the energy or electricity sector. (Castalia Consulting, 2012; Renewable Energy & Energy Efficeny Partnership, 2010; World Bank, 2010)

Under the Public Utilities Act of 1973, APUA was set up as a “tripartite government statutory agency” which controls and regulates telecommunications, electricity and water services. APUA holds the exclusive right for the generation, distribution, transmission and selling of electricity and it can grant permission to Independent Power Producers to generate and supply electricity and has done so as part of long-term power purchase agreements to meet peak demand. (Government of Antigua & Barbuda, 2010; Organization of American States, 2010) The only institutions related to the energy sector are the Ministry of Public Utilities and APUA. There is no designated regulatory agency which ensures that consumers are guaranteed access to reliable and affordable energy services. (Government of Antigua & Barbuda, 2010; Organization of American States, 2010) Antigua and Barbuda is currently developing a National Energy Policy (draft released in December 2010) aiming to introduce a National Energy Unit and an independent regulatory agency with the participation in the planned Eastern Caribbean Energy Regulatory Authority (ECERA).