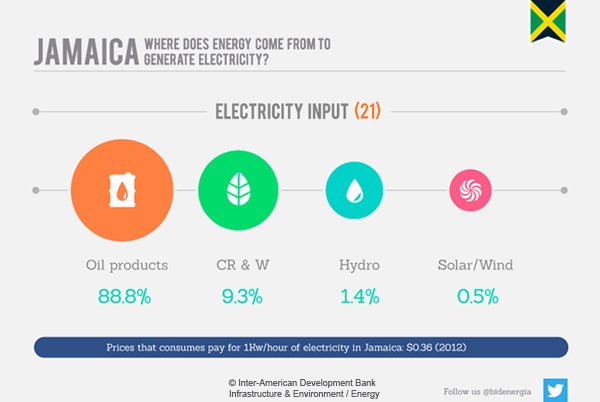 Jamaica is the third largest island in the Caribbean, after Cuba and Hispaniola and is home to a population of 2.83 million people. The country’s largest contributors to the national GDP are the bauxite industry, the tourism sector, agriculture and the manufacturing sector. The tourism sector is an important source for foreign exchange. Jamaica does not have notable hydrocarbon reserves and relies fully on imports to meet its petroleum and coal requirements. The country consumes about 60,000 barrels of oil per day (2010). (Ministry of Energy and Mining, 2010)

The majority of the island’s energy needs, about 84 percent, are imported in the form of crude oil, coal and oil products. Combustible renewables and waste (CR&W) account for the remaining 16 percent of primary energy supply. Hydropower and wind power represent only 0.4 percent.

The bauxite industry is the largest end user of energy consuming 37.4 percent of total energy followed by the electricity sector which consumes about 25 percent of energy, the transportation sector with 20.4 percent and the sugar industry with 12.2 percent. While the bauxite industry is very energy intense, it makes a significant contribution to the balance of payments, generating much need foreign revenue through exports. (Government of Jamaica, 2011)

Like most island states in the Caribbean Jamaica’s energy imports as a share of overall imports has grown significantly over the past decade. In 2007 energy imports represented 34.5 percent of all imports, a doubling over the previous five years. The economic cost of energy imports can not be overstated and the value of energy imports exceeds the value of total Jamaican exports. (Arbelaez & Marzolf, 2011) Oil consumption has grown at 3.75 percent per year since 2003, almost 8 times faster than population growth. With no domestic supply of hydrocarbon resources and the energy intensive bauxite and alumina industries, per capita oil consumption exceeds that of other Caribbean island states.

Similar to the electricity sector in most Caribbean island states, Jamaica’s electricity sector is highly dependent on fossil fuels, mainly fuel oil and diesel, for the generation of electricity. Steam and diesel account for 71 percent of overall generation, followed by combined cycle gas turbines at 17.2 percent, and gas turbines at 6.6 percent. Renewables account for just 5.2 percent of generation with 3.9 percent coming from hydropower and 1.3. percent from wind. (Arbelaez & Marzolf, 2011; World Bank, 2010) The country has one functioning wind farm with a capacity of 20.7 MW and eight small-capacity hydropower plants provide a total capacity of 23 MW. Total generation capacity stands at 622MW. (Ministry of Energy and Mining, 2010; World Bank, 2010)

The Ministry of Science, Technology, Energy and Mining has overall responsibility for the formulation and review of energy policy, including energy efficiency and conservation, identifying consumption trends and forecasting future demand scenarios. The Energy Division within the Ministry implements policy and monitors the functioning of the energy sector. It works with the Petroleum Corporation of Jamaica (PCJ) and the Jamaica Public Service Company (JPSCo). (Ministry of Energy and Mining, 2013)

The electricity sector is governed by three regulatory framework documents: the Electric Lighting Act of 1890, the Utilities Regulation Act of 1995 and the All-Island Electric License of 2001.

The Electric Lighting Act anchors the government’s role in the sector. It holds the power to regulate prices and quality of the energy supply and to grant licenses to local authorities, companies or individuals to generate electricity. The Utilities Regulation Act of 1995 establishes the Office of Utilities Regulation as regulatory body allowing it determine price structure or fares, and to establish standards for the quality and safety, environment, reliability and efficiency of electricity service. The All-Island Electric License of 2011 regulates the distribution and transmission of electricity. It grants exclusive rights to JPSCo to function as sole transmitter and distributer of electricity for the next 20 years.  (Ministry of Energy and Mining, 2009; World Bank, 2010)

Outside the existing regulatory framework, the Rural Electrification Program Limited (REP), which functions as an executive agency of the government, has been providing rural electrification since 1975. (Arbelaez & Marzolf, 2011)

Oversight of the electricity sector falls in the hands of Office of Utilities Regulation (OUR), an independent regulatory agency established in 1995. It is tasked to “establish and maintain transparent, consistent and objective rules” for the regulation of utility service providers. It also receives applications by IPP and issues recommendations to the Ministry regarding their approval. OUR also sets the electricity tariff for each provider and regulates the final price of electricity, though it does not set tariffs on the transmission and distribution of electricity. (Ministry of Energy and Mining, 2009)

Government of Jamaica. (2011). Jamaica Second National Communication to the UNFCCC. Retrieved from http://www.energycommunity.org/documents/snc2jamaica.pdf

Ministry of Energy and Mining. (2013). About the Ministry. Retrieved from http://www.men.gov.jm/men.htm