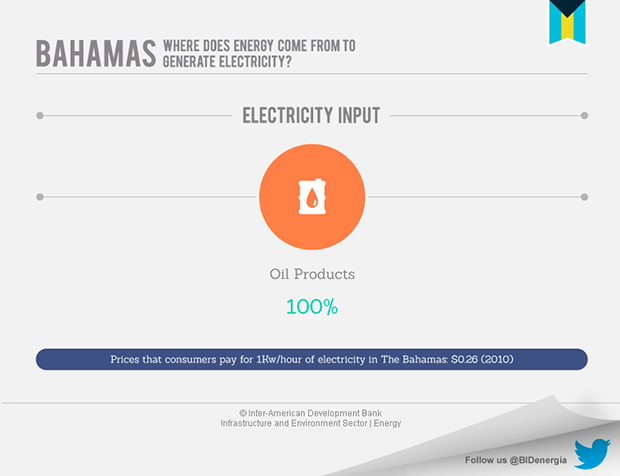 The Commonwealth of the Bahamas comprises about 700 islands and cays, 30 of which are inhabited, and is home to a population of 338,000. More than two thirds of the population resides in the capital city of Nassau on the island of New Providence. Like the economies of most Caribbean island states, the Bahamas’ economy is disproportionately service oriented with little capacity for the manufacturing of goods. The tourism industry is the country’s most important sector contributing directly or indirectly to more than 60 percent of the overall GDP and employing half of the total labor force. (Organization of American States, 2010; Wilson, 2009)

Electricity is distributed along 16 isolated island grids. Thus, expansion is incremental and generation capacity is primarily small diesel plants with a capacity of 25 MW and less. Per capita consumption is very high with 5,700 kWh per capita per year. (Organization of American States, 2010; Wilson, 2009)

The Ministry of the Environment (MOTE) is the responsible agency for the energy sector in the Bahamas. It is supported by the Bahamas Environment, Science & Technology Commission (BEST) which assesses the environmental impact of energy and electricity sector projects. At a future date, yet to be determined by the government, the newly created Utilities Regulation and Competition Authority (URCA), which currently regulates electronic communications, will be task to “assume responsibility” for the electricity sector. (Government of Bahamas, 2010; Organization of American States, 2010)

The Out Island Act allows for the creation and operations of private utilities to supply electricity to the Family Islands if “it is in the nation’s best interest.” It has been difficult for the private sector to meet this provision and as a result BEC continues to be the exclusive electricity provider except on Grand Bahama and a number of very small franchise holders which are allowed operation in the area controlled by the Grand Bahama Port Authority under the Hawksbill Creek Act. (Government of Bahamas, 2010; Organization of American States, 2010)

The monopoly supplier (BEC) is not required to purchase electricity generated by independent power producers (IPP) offering limited incentive for outside investments into the electricity sector as a whole or RE sources in particular. No regulation exists for the interconnection of power generation making it nearly impossible for IPP to feed their capacity into the existing grid. Furthermore, there does not exist a national energy efficiency standard or a national energy conservation effort and by some estimates as much as 27 percent of electricity demand could be saved through efficiency measures. The Government of the Bahamas functions at the same time as the “policy-maker, regulator, and owner” leading to a less than ideal set-up for the electricity sector. The current regulatory framework has resulted in a “regional monopoly on electricity production and distribution” which lacks competition and efficiency and fails to produce electricity at “reasonable” prices. (Government of Bahamas, 2010; Organization of American States, 2010; Renewable Energy & Energy Efficiency Partnership, 2012)