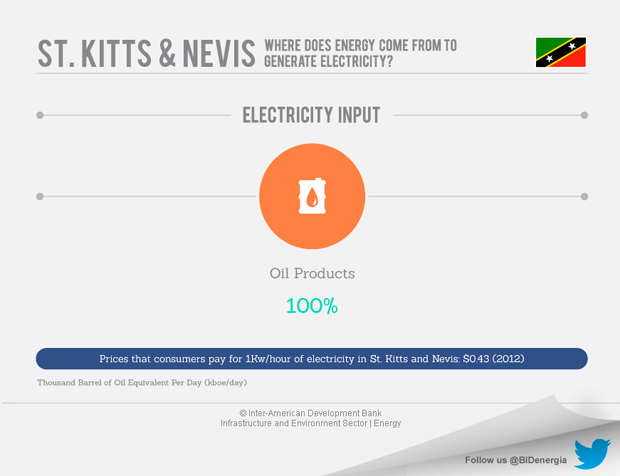 The two-island state of St. Kitts and Nevis is part of the Leeward Islands chain in the Eastern Caribbean. The two islands are home to a population of 51,300. About 75 percent of the population, about 40,000, reside on St. Kitts, the remaining  approx. 12,000 live on Nevis. The island states’ economy is dominated by the tourism sector which has grown significantly over the past decade. In 2009 tourism contributed 31.7 percent to total GDP and employs 32.2 percent of the work force. Other important contributors to the national GDP come from government services and the banking and insurance industry. Manufacturing and mining also play a role. (Government of St. Kitts and Nevis, 2009)

St. Kitts and Nevis receive about 88 percent of their overall energy through imported oil products, with the remaining share coming from combustible renewables & waste and also wind power.

The artificially low electricity tariffs encourage overconsumption, and as a result the country’s GHG emissions per capita are higher than in other OECS countries. SKELEC relies entirely on diesel for the generation of electricity. The majority of electricity produced on Nevis also comes from diesel generation. Since 2011 a small wind farm (2.2MW), the first in the Eastern-Caribbean, provides limited amounts of electricity, on Nevis. (Government of St. Kitts and Nevis, 2009)

Total capacity on both islands, whose grid is not interconnected, stands at 41.7MW. Overall the system has very little reserve capacity to meet peak demand. Large hotels rely on self generation instead. The Marriott Hotel has a self generation capacity of 4MW using diesel generators. (Government of St. Kitts and Nevis, 2009)

The Ministry of Public Works, Housing, Energy and Utilities as well as the Ministry of Finance, Sustainable Development and Human Resource Development are responsible for the development and implementation of energy policy. The 1954 Petroleum Ordinance regulates the importation, storage and sale of petroleum products. The 2008 Nevis Geothermal Resources Development Ordinance allows for the exploration, drilling, production and use of geothermal resources. (Castalia Consulting, 2012; World Bank, 2010)

SKELEC is a state-owned-owned public utility responsible for the generation, transmission and distribution of electricity on St. Kitts. On Nevis, the same services are provided by NEVLEC, which is a private-state owned utility. Each company is tasked to provide effective and reliable electricity services and has the authority to set the price of electricity tariffs. There does not exist an independent regulatory body. (Castalia Consulting, 2012; SKELEC, 2013; World Bank, 2010)