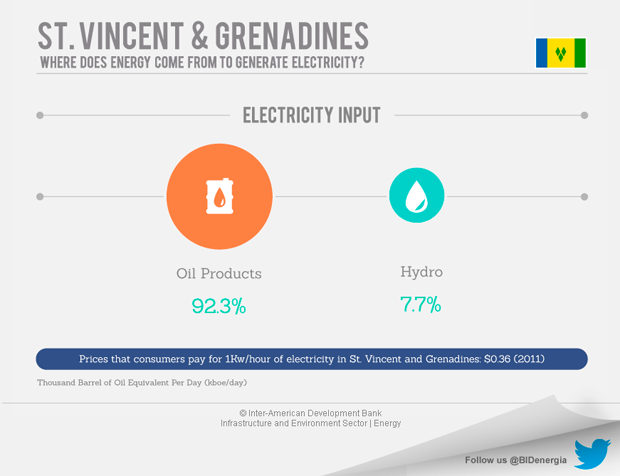 St. Vincent Electricity Services Limited (VINLEC) was established as public electricity utility in 1931 and holds the exclusive license to provide the public with electricity until 2033. It can however issue license to other parties that wish to generate and distribute electricity. This is an important provision as VINLEC only provides power to St. Vincent and four of the Grenadines (Bequia, Canouan, Union Island, and Mayreau). The private islands of Palm and Mustique generate their own electricity for exclusive consumption by their resorts. (Government of St. Vincent and the Grenadines, 2000)

VINLEC currently operates a total generation capacity of  56.8MW, consisting primarily of diesel generators, as well as a heavy fuel oil generator and three small hydroelectric plants. The utility operates 5.7MW of installed hydro plant, of which 3.3MW came online in 2012. While studies of the island’s remaining hydro potential have been conducted, no concrete steps to construct additional plants have been taken. Electricity tariffs are relatively low compared to other countries in the region, in part because VINLEC generates some electricity (about 16 percent) using hydroelectric plants. (Government of St. Vincent and the Grenadines, 2000)

The electrification rate is 99% and over the past decade the commercial sector (mainly hotels) has contributed the most to growth in demand since 2003. In 2008, commercial uses totaled approximately 47% of all electricity closely followed by residential use with 45%. Industry is of only minor importance. VINLEC installed new generation capacity in 2011 and 2012 to meet growing demand. (Government of St. Vincent and the Grenadines, 2000)

The Prime Minister’s office currently functions as the Ministry of Energy and holds overall control over the energy sector. In 2008 an Energy Unit was created within the Prime Minister’s Office responsible for the formulation and implementation of energy policy when it comes to renewable energy and efficiency. In addition, the Ministry of Telecommunications, Science, Technology and Industry is also tasked with influencing energy policy. The distribution and transmission of energy falls into the portfolio of the Ministry of Transport, Works and Housing.

VINLEC, a vertically-integrated utility, has held a monopoly on the generation, transmission, distribution and sale of electricity since 1973 and will continue to do so until 2033. VINLEC has the power to issue licenses, both to IPP and self-generators, that wish to generate electricity. Licenses have been granted to two IPP which supply the private islands of Palm and Mustique. There is no dedicated independent regulator in St. Vincent and the Grenadines. In theory the Ministry of Energy functions as a de factor regulator but VINLEC operates largely independent.