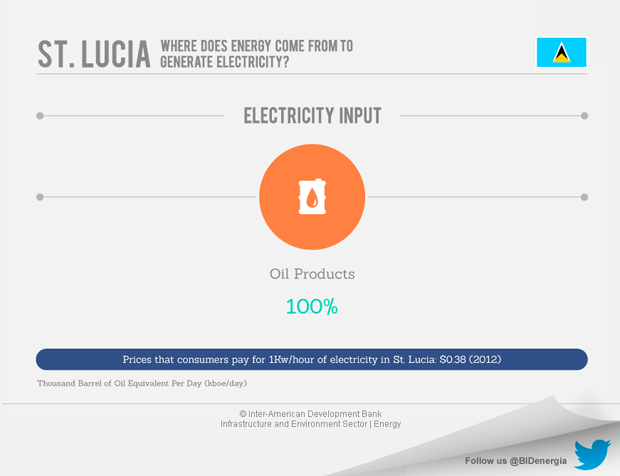 St. Lucia is part of the Lesser Antilles and is located north of St. Vincent and northwest of Barbados. It has a population of 174,000 people, of more than a third reside in the capital of Castries. St. Lucia’s economy used to be primarily based on mono-crop agriculture (especially bananas). However, since the early 2000s, tourism has emerged as the main revenue earner of the economy, with services, manufacturing and industry being the other important productive sectors. (Castalia Consulting, 2012)

St. Lucia, like most ECS, is characterized by a high dependence on imported fossil fuels to meet its energy demand. Saint Lucia has no known petroleum reserves and apart from limited usage of combustible renewables, all energy is imported, mainly from Trinidad. St. Lucia receives about 98 percent of its overall energy through imported oil products, with the remaining share coming from combustible renewables & waste. All refined petroleum products are imported and subsequently stores at the Hess Oil St. Lucia Company Limited (HOSL) oil storage facility in the northern part of the island. Hess Oil is the exclusive supplier of fuel to the island utility company, St. Lucia Electricity Services Limited (LUCELEC). (Castalia Consulting, 2012; Government of Saint Lucia, 2003; World Bank, 2010)

LUCELEC is the sole utility company generating, transmitting, distributing, and selling electricity. It holds the sole license until 2045 with the exception for self-generation. St. Lucia’s rate of electrification is about 98% and demand for electricity has steadily grown (4.6% annually between 2002 and 2007) over the last decade, especially in the commercial sector. LUCELEC produces most of its electricity at its Cul De Sac power plant and operates an additional five sub-stations throughout the island. Energy is transmitted via a 66kV high voltage line circumscribing the island. (Castalia Consulting, 2012)

With about 90,000 customers, St. Lucia represents the largest electricity market in the Eastern Caribbean, both in terms of peak electricity demand and number of customers. Economies of scale allow it to offer some of the lowest electricity rates throughout the region. Nonetheless, electricity prices remain volatile, as all utility scale generation on the island is based on imported fossil fuels. To reduce this vulnerability LUCELEC actively conducts hedging against volatile fuel prices. As this practice began only in 2009 its impact on electricity prices and price stability is not yet known. As electricity demand continues to grow LUCELEC is facing the challenge to add capacity at a sufficient rate.  (Castalia Consulting, 2012; Government of Saint Lucia, 2003)

The Ministry of Physical Development, Environment and Housing as well as the Ministry of Public Service, Sustainable Development, Energy, Science and Technology are responsible for implementing the 2010 National Energy Plan and Sustainable Energy Plan. (Castalia Consulting, 2012; Ephraim & Tulsnie, 2010) An Independent Regulatory Commission is responsible for the issuing of licenses for the generation, transmission, and distribution of electricity. It also sets tariffs and rates and approves investments in the energy sector.(Organization of American States, 2010)

According to the 1964 Power Supply Regulation LUCELEC is the sole license holder for the generation, transmission, distribution and sale of electricity until 2045. (Organization of American States, 2010)When the regulation was amended by the Electricity Supply Act (ESA) in 1994 LUCELEC’s exclusive license was left untouched. In theory the Minister of Public Utilities can intervene in and regulate LUCELEC’s actions, but in practice the company is largely self-regulating setting its own electricity tariffs and self-monitoring that its standards are being met. (Castalia Consulting, 2012) Under ESA a system of tariffs was established which functions independently from political pressures and ensures that LUCELEC has sufficient funding to provide improved service quality and coverage. It also established a fuel adjustment surcharge which takes into account all increases or decreases in the price of imported fuels and passes costs on to the consumer. (Castalia Consulting, 2012)