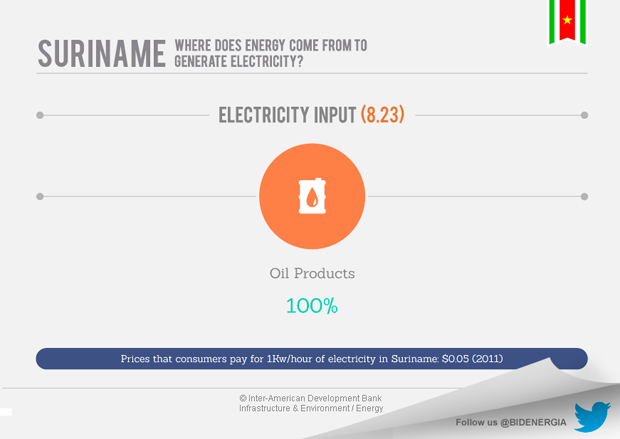 Suriname is located along the northern coast of South America and is home to a population of 492,000. It achieved its independence in 1975 making it the youngest independent state in South America. About half the country’s population lives in the capital city of Paramaribo located along the coast in the north-eastern part of the country. The national economy is dominated by the extractive industry primarily oil, bauxite as well as gold. Taking into account indirectly related industries, the extractive industry accounts for more than 50 percent of national GDP and oil, bauxite and gold make up about 80 percent of national exports. (Global Environment Facility, 2012) The country is highly energy self-sufficient and imports less than 15 percent of its energy needs. Nonetheless 18.3 percent of its overall imports (2009), about 264 million USD, were fuel imports. Suriname’s high energy independence is due to a combination of extraction of fossil fuels and significant wealth of hydropower. More than half of generated electricity, 53 percent in 2009, comes from hydropower. (IRENA, 2010)

Suriname is the third largest oil producer in the Caribbean after Trinidad and Tobago and Cuba. It produces approximately 16,000 barrels of oil per day (bbl/day). Domestic production of crude oil roughly meets domestic consumption. Refining capacity by the state-owned oil company Staatsolie, however, is limited to 7,000 bbl/day and to fulfill domestic demand refined oil products such as diesel and gasoline are imported. Staatsolie plans to increase capacity to 15,000 bbl/day by 2013. (European Union, 2008; Global Environment Facility, 2012)

The majority of Suriname’s electricity is produced in hydro plants and as a result of this the country has a very low reliance on fossil fuels for the generation of electricity. In total Suriname has an installed capacity of 390 MW of which 189 MW are operated by Suralco, the country’s main aluminum and bauxite producer. The Afobaka hydropower plant, operated by Suralco,functions as the backbone of the country’s electricity system. Suriname’s national power company NV Energiebedrijven Suriname (EBS) purchases excess electricity from Suralco. (Global Environment Facility, 2012)

The Petroleum Law of 1990 established Staatsolie as the state-owned vertically integrated oil company with sole responsible for the extraction, refining and sale of petroleum products both domestically and for export. The company is solely responsible for the exploitation of hydrocarbon resources and foreign investors or oil companies can only get involved in the sector through exploration and production sharing agreements in partnership with Staatsolie. Staatsolie de facto functions as both an oil production company and as a regulator leading to potential conflicts of interests. (Renewable Energy & Energy Efficiency Partnership, 2013; South Trinidad Chamber of Industry and Commerce, 2009)

The electricity sector in Suriname lacks an overarching policy and regulatory framework. Instead, a number of contractual agreements between Suriname’s national power company EBS and private sector companies determine the functioning of the sector. The Brokopondo Agreement from 1957 established Suralco as a major electricity producer whereby excess electricity production would be fed into the national grid. The share of electricity produced by Suralco and subsequently purchased by EBS for domestic consumption has increased sharply since the closure of a major aluminum smelter in 1999. (Global Environment Facility, 2012)

Government of Suriname. (2005). First National Communication under the UNFCC.

South Trinidad Chamber of Industry and Commerce. (2009). Assessment of the energy services sector in the caribbean.