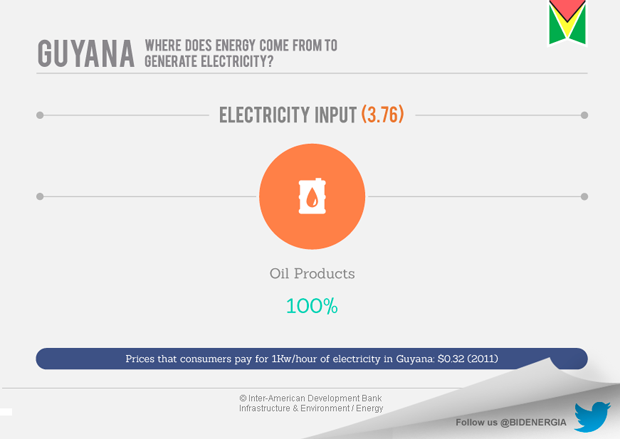 Guyana is located along the northern coast of South America and is home to a population of 778,000. Its neighbors are Suriname to the east, Venezuela to the west, Brazil to the west and south and the Atlantic Ocean to the north. The vast majority of the country is populated extremely sparsely and 90 percent of the population reside in or in the proximity of the capital city of Georgetown. Guyana’s agricultural sector is the largest contributor to the national GDP, comprising about 35 percent. Of importance are also the extractive industries, manufacturing and tourism. It was estimated that tourism contributed 12 percent to the national GDP in 2001. (Government of Guyana, 2012)

While Guyana has some reserves of petroleum in the Takutu Basin and explorations were conducted in the 1950s, the country never engaged in a commercial level of production. As a result the country is highly dependent on imported oil products for its overall energy supply. In 2009 a quarter of Guyana’s imports were energy related. Imported fossil fuels account for about half of final energy consumption with the other half coming from combustible renewables and waste products (CR&W). Energy consumption is dominated by the electricity sector, industry and mining. Together these three sectors account for 90 percent of primary energy consumption. Generation of electricity is entirely fossil fuel based and the majority of generation capacity comes from plants utilizing heavy fuel oil or diesel. Like its neighbor to the east, Suriname, Guyana has significant hydropower potential. In contrast to Suriname however, Guyana has yet to tap this potential estimated at 700 MW. The country is currently constructing a 165 MW hydropower plant at Amaila Falls to begin operation in 2014 aiming to reduce the country’s dependence on fossil fuels for electricity generation.(Global Environment Facility, 2013; Government of Guyana, 2012)

The electricity sector is dominated by the primary producer and supplier of electricity, Guyana Power and Light Inc (GP&L) which functions as a state-owned vertically integrated utility. GP&L holds a monopoly on the transmission and distribution of electricity and produces about half of the country’s electricity. GP&L’s financial situation has deteriorated in recent years with increasing crude oil prices and building commercial and technical losses. It operates a capacity of 171.5 MW and produced 489 GWh in 2010. I

The country’s second largest producer is the Guyana Sugar Corporation, which sells excess electricity to GP&L. In 2010 it supplied 81 GWh of electricity to GP&L. (Guyana Sugar Corporation, 2010) The vast rural areas of the country are supplied by small scale private energy companies which produce and distribute electricity for the country’s hinterland and rural villages. Their total capacity stands at 35 MW. (Global Environment Facility, 2013) Due to the unreliability of the electricity system the majority of large and medium-sized firms in Guyana rely on self generation of electricity. Per capita consumption of electricity in 2009 was 749 kWh compared to an average 1946 kWh per capita in Latin America. (IRENA, 2010)

The rate of electrification differs starkly between the capital and rural communities along the coast on one hand and rural areas in the country’s hinterland on the other hand. GP&L has been successful in increasing electrification to almost 90 percent along the coast. In other parts of the country, however, 80 percent of the population lack access to electricity.  The large size of the country, the lack of population centers and vast distances between small villages renders it infeasible to expand the coastal grid into these areas.  (Global Environment Facility, 2013; Government of Guyana, 2012)

The Guyana Energy Agency’s mandate is defined by the Guyana Energy Agency Act 1997, the amendment acts of 2004 and 2005, as well as the Petroleum and Petroleum Products Regulations 2004. The agency is tasked with developing a national energy policy and is responsible for its implementation. It “monitors the performance” of the overall energy sector, including the entire petroleum production chain from “production, importation, distribution and utilization.” (Guyana Energy Agency, 2013a)

The electricity sector has undergone some recent changes with the passing of the Guyana Energy Agency Act in 1997, the Electricity Sector Reform Act (ESRA) and the Public Utilities Commission Act in 1999. ESRA designates the Office of the Prime Minister (OPM) as the primary policy-making and regulatory body. The OPM has the power to grant licenses to IPP, develop and implement new regulation and alter or amend existing laws. In rural parts of the country – outside of the service area of GP&L – OPM works with the Ministry of Amerindian Affairs (MoAA) to achieve higher electrification rates. The Guyana Energy Agency (GEA) was established in 1998 and is responsible for all energy-related matters “ensuring the rational and efficient use of imported petroleum-based energy sources, while encouraging, where economically feasible and environmentally acceptable, increased utilization of indigenous new and renewable sources of energy.” (Guyana Energy Agency, 2013b)

In addition to OPM and GEA, Suriname’s electricity sector is influenced by the Public Utilities Commission (PUC) and the Government Electrical Inspectors (GEI). PUC is a “multi-sector independent regulatory agency” responsible for setting rates and developing regulations. (Global Environment Facility, 2013)

Government of Guyana. (2012). Guyana Second National Communication to the UNFCCC.

Guyana Energy Agency. (2013a). About Us. Retrieved from http://www.gea.gov.gy/about-us

Guyana Sugar Corporation. (2010). GuySuCo does resonably well in its 1st crop performance despite effects of the El Nino phenomenon. Retrieved from http://www.guysuco.com/landsales/