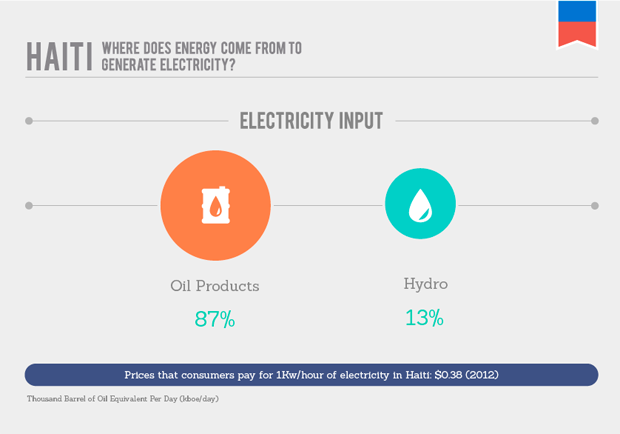 Haiti is located in the central Caribbean and occupies the western part of the island of Hispaniola together with its direct neighbor the Dominican Republic. It has a population of 9.7 million people and 60 percent of the population live in rural areas. Nonetheless there is substantial pressure on urban areas as the population there has more than tripled over the past 30 years to almost 4 million inhabitants. The country’s service sector contributes about 45 percent to the national GDP. Agriculture, mining and construction contribute 35 percent to the GDP and the industrial sector accounts for 10 percent. The general lack of high value export products results in a substantial negative balance of trade. Imports exceed exports by a factor of three. (Ministry for Public Works Transportation and Communications, 2007)

Per capita energy consumption in Haiti is by far the lowest in all of the Caribbean with less than 100 kWh annually. Overall energy supply is dominated by fuel wood and charcoal which account for 75 percent of final energy consumption. Fossil fuels provide about 20 percent of final consumption of electricity accounting for the remaining 4 percent. The majority of energy, 65 percent, is consumed residentially, followed by industry with 19 percent, transportation with 12 percent and services with 4 percent. Less than 30 percent of households are connected to the national electricity grid, of which only 12.5 are connected through metered and legal connections. Despite the relatively small energy sector, fossil fuel imports account for between 35 and 50 percent of overall imports. (Ministry for Public Works Transportation and Communications, 2007; Renewable Energy & Energy Efficiency Partnership, 2013)

The state-owned vertically integrated utility Electricité d’Haiti (EDH) has a monopoly on the production, transmission and distribution of electricity. It has a total generation capacity of 216 MW of which roughly one third (61.75 MW) come from hydropower and two thirds come from thermal generation. The majority of generation capacity (172 MW) is concentrated in the metropolitan region around the capital Port-au-Prince where two thermal plants and one hydropower plant provide electricity. The remaining 44 MW capacity are distributed throughout the country where small power plants with between 300kW and 9.8MW capacity generate electricity. Haiti’s annual per capita consumption of electricity is the lowest in the Caribbean with 36 kWh. In comparison, the Caribbean average is 1,251 kWh. (IRENA, 2012; Ministry for Public Works Transportation and Communications, 2007; World Bank, 2010)

In addition to EDH a limited number of Independent Power Producers (IPP) have been providing electricity since 1996 when the first IPP contract was signed with EDH. In total IPP provide 94 MW capacity, of which 70 MW are based in the capital region and 24 MW are located in the rest of the country. (Ministry for Public Works Transportation and Communications, 2007)

The Ministry of Public Works, Transportation and Communications (MTPTC) is the lead government agency responsible for the regulation of the energy and electricity sector in Haiti. Operating under supervision of MTPTC is the Bureau of Mines and Energy (BME), which was created as an independent agency in 1986. It is responsible for the exploration and promotion of mineral and energy resources and the technical aspects of the sector. It has close ties to EDH, e.g. the Minister of MTPTC also functions as the president of the Executive Board of EDH. The Ministry of Environment is tasked with the furthering of sustainable and renewable energy and questions relating to environmental protection in the energy sector. The overall institutional framework is weak and there exists a general lack of transparency. (Ministry for Public Works Transportation and Communications, 2007; Renewable Energy & Energy Efficiency Partnership, 2013)

Electricité d’Haiti (EDH) was established on August 9, 1971 as a state-owned, vertically integrated utility which holds a monopoly on the generation, transmission, distribution and sale of electricity. EDH underlies the control and direction of the MTPTC and reports its activities to the Ministry . Production of electricity by IPP began in 1996 when Interselect SA signed a contract with EDH. Since then EDH has signed a number of power purchase agreements with a number of operators, e.g. Haytian Tractor, Alstom and Sogener. (Ministry for Public Works Transportation and Communications, 2007; World Bank, 2010)