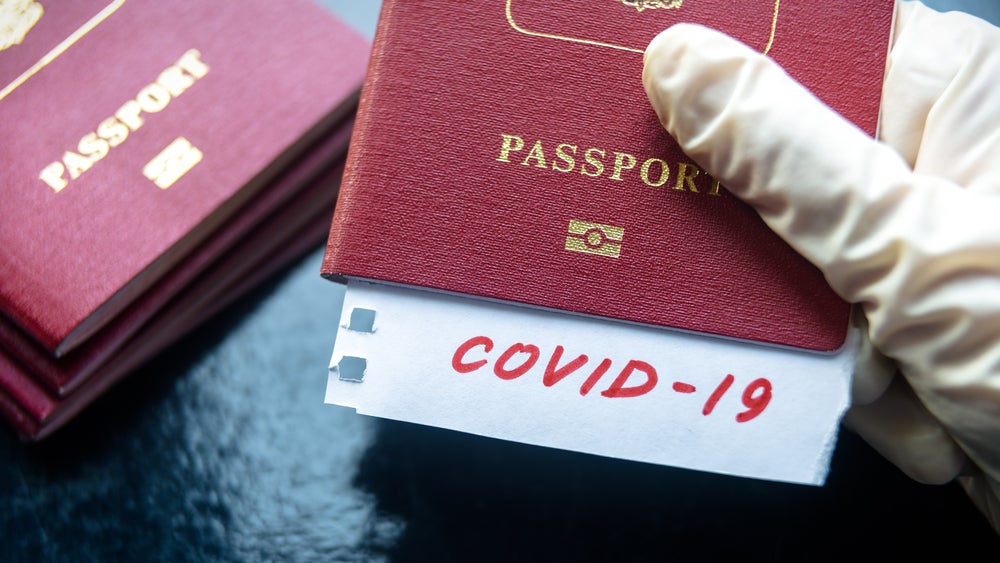 The COVID-19 outbreak could have considerable implications for Caribbean citizens and their economies. The magnitude of this impact will depend crucially on the spread of the virus, the duration of the outbreak, and measures countries in the region and elsewhere undertake to insulate themselves. It will also have much to do with country economic structures—particularly tourism dependence. This post focuses on tourism as a key shock transmission channel, and considers IDB regional member countries’—i.e., The Bahamas, Barbados, Guyana, Jamaica, Suriname, and Trinidad and Tobago (referred to from here on as the “CCB” countries)—dependence on this sector, while putting forward illustrative scenarios for ranges of possible shocks to output over various horizons. While for illustration purposes only, our scenarios highlight that because of the significance of the sector for several of our countries, as well as large increases in tourism arrivals during the peak period late in the year, a prolonged crisis could have a more amplified impact on economic activity via the tourism channel than one that is contained relatively quickly.

Transmission Channels. The impact for individual economies will differ depending on the structure of the economy (e.g., tourism dependence vs. commodity exporter), and transmission channels through which the shock propagates. These can be broken into two broad categories—(i) domestic outbreak and prevention measures, and (ii) external price and demand shocks.

Country-Specific Vulnerabilities. For the six countries that are members of the IDB’s Caribbean Department, key external channels will include: (i) tourism, (ii) commodity prices, and (iii) cross border financial flows. For this post, we focus on the economic significance of tourism, and potential impact scenarios related to the sector—likely the most significant external channel for at least 3 of our 6 countries. 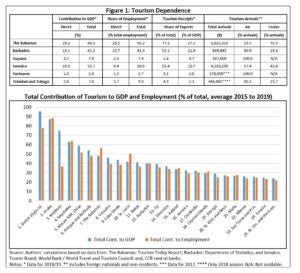 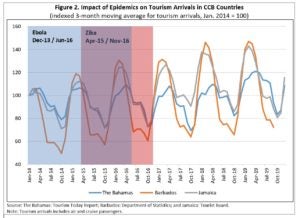 You can listen to our discussion on the transmission of shocks from the crisis to Caribbean economies and how they can respond in this podcast:

Shock Scenarios via the Tourism Sector. Table 1 provides illustrative shock scenarios, reflecting a range of possible impacts of the crisis on real output (GDP) for our six countries. Note that these are based on estimates of both the direct and total contributions of tourism to real GDP (see Figure 1, above) for each of our countries, based on data available from the World Bank / World Travel and Tourism Council. We simulate the possible impact on GDP of 3 shock magnitudes (i.e., a reduction of tourism activity by 25%, 50%, and 75%) over 3 time horizons beginning on April 1, 2020 (i.e., through end-June 2020, end-Sep. 2020, and end-Dec. 2020). Our simulations take into account historical seasonal arrival patterns for each of the shock horizons. They do not, however, take into account shocks to other sectors (e.g., merchandise or commodities trade[1]) or second round effects. Similarly, we apply the shock to the historical contributions of tourism to GDP, which does not take into account the non-linear properties of such a shock, particularly the fact that shorter duration shocks are likely to have less severe implications for operators (e.g., hotels, restaurants, service providers, etc.) than a prolonged crisis—e.g., a short-lived shock may not require lay-offs or extended closures, or lead to major financial difficulties, whereas a prolonged shock could force operators to make more severe adjustments. 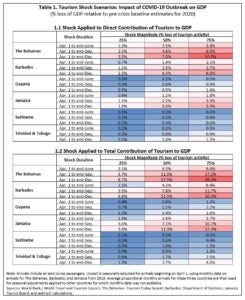 Results: While our shock scenarios (Table 1) are incomplete as they do not take all transmission channels or second round effects into account, they do highlight that the impacts of a short-lived crisis on tourism-driven output would be considerably less damaging than one that extends through the peak season beginning later in the year—particularly for countries with large seasonal variations. As noted, we apply the same shock scenarios to two variables: the direct (Table 1.1) and total (Table 1.2) contributions of tourism to each country’s overall output. At the extreme, a high-impact scenario of a 75% reduction in tourism arrivals over the last 3 quarters of the year could reduce GDP relative to the pre-crisis baseline expectation by between 11 percentage points and 26 percentage points in the case of Bahamas, and by appreciable magnitudes also for Barbados and Jamaica. Countries that are less tourism dependent would also be less affected across our range of scenarios, though other channels not simulated here could also have large impacts.

Policy Implications: Given the rapidly evolving nature of this crisis, any impact estimates are subject to considerable uncertainty. What is clear is that the spread of the virus, its implications for global financial markets, and measures being undertaken by governments around the world have grown more severe with every passing day. In this context, CCB governments are likely to face increased financing needs driven by both direct costs of crisis mitigation, and from revenue implications of the economic shock, and that policymakers should work towards developing contingencies and identifying low-cost supplemental financing options over the near term, including those available from international financial institutions. A failure to do so could have adverse implications for longer term fiscal and debt sustainability, and put at risk the hard-won gains achieved by many countries in the region over recent years.

[1] For example, the fall in oil prices, if sustained, represents a positive offsetting effect on net oil importers.

To listen to more podcasts in our Improving Lives in the Caribbean series, click here: