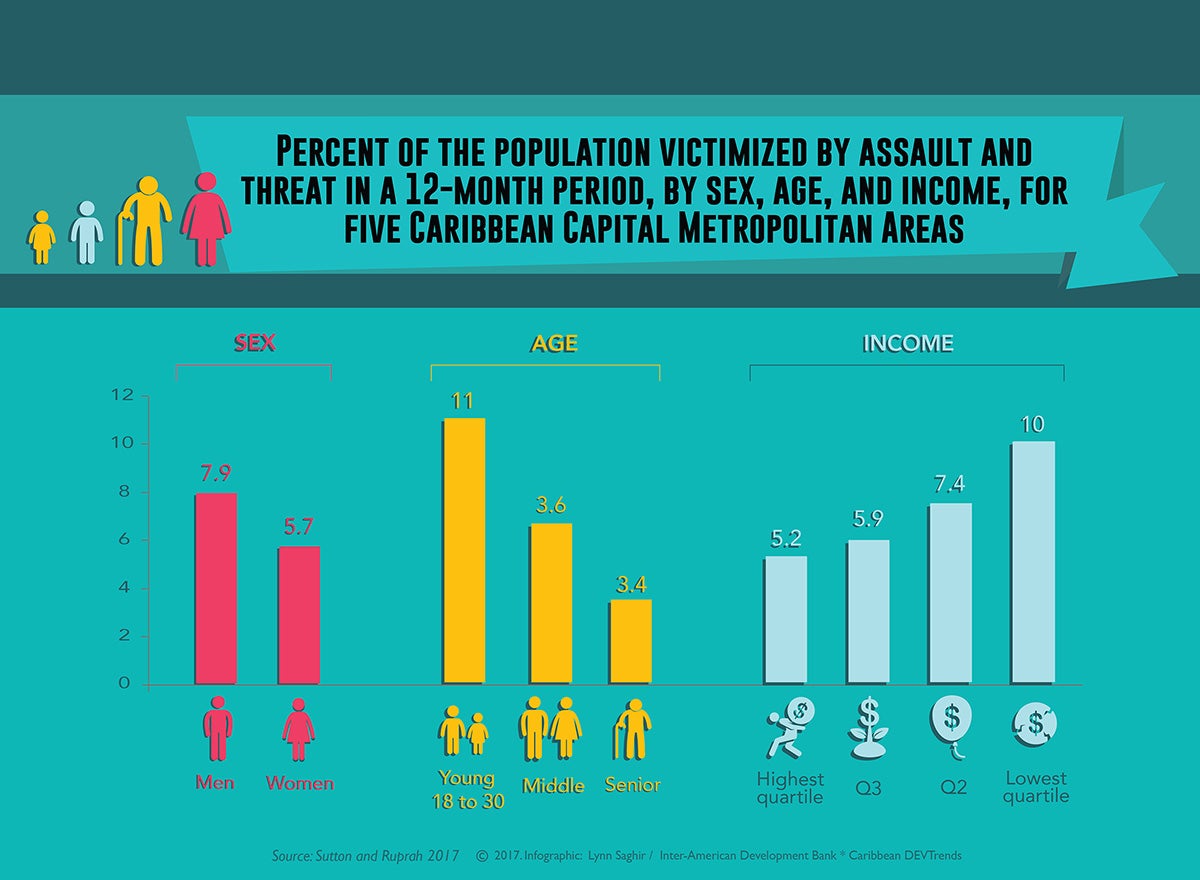 Crime doesn’t affect everyone equally, and knowing who is more likely to be a victim can help target interventions. But, in the Caribbean, finding the risk factors that make individuals more likely to be victims is not easy. The lack of reliable crime data, particularly on the characteristics of crime victims, make this a challenging task.

The recent IDB study, Restoring Paradise in the Caribbean: Combating Violence with Numbers (executive summary here), we took on the challenge and used crime victimization surveys of a representative sample of the population in five Caribbean capital cities to further explore the characteristics of the victims.

Among several questions we posed in this study, we wanted to know in the region with the highest rates of assault and threat, who is most at risk. The infographic shows that victimization rates for assault and threat are higher for men than women (the category of injuries specifically excludes domestic violence and sexual violence, both types of violence require specially designed surveys to obtain reliable estimates) and are nearly twice as high for youth in the ages of 18-30 (11%) as the overall population (6.8%). The rate of assault and threat among the poorest 25 percent of the population was twice as high as the upper 25 percent. When compared to the average international victimization rate for assault and threat – 4.4% – the rates for young Caribbean males in the lowest income range are more than twice as high.

When we look at other crimes, we do not see the same victim characteristics. Burglary is a household crime, and therefore victimization rates are relatively evenly distributed across gender and age and appear to have a curvilinear relation with income (higher in lower- and upper-income quintiles). Victimization by other property crimes, such as theft, shows little differentiation across various income, age, and gender groups in the Caribbean.

When taking other factors into account (such as where a person lives for example), being young and male are still strong predictors of victimization by assault and threat, but wealth becomes much less significant. In other words, wealth may not be as important as the characteristics of your neighbourhood. We found that other factors including gun ownership and neighbourhood characteristics such as physical disorder, low trust among neighbours and a neighbourhood gang presence have strong correlation with victimization by violent crime (stay tuned for a forthcoming blog on these topics).  In a context of limited resources, being able to identify these risk factors is key because it tells us who and where policies and programs should target.

– Is Crime in the Caribbean Unique?

– What is missing from police crime statistics?

– Do socio-demographic factors explain high violent crime in the Caribbean?

– How much is adolescent violence impacted by early exposure?