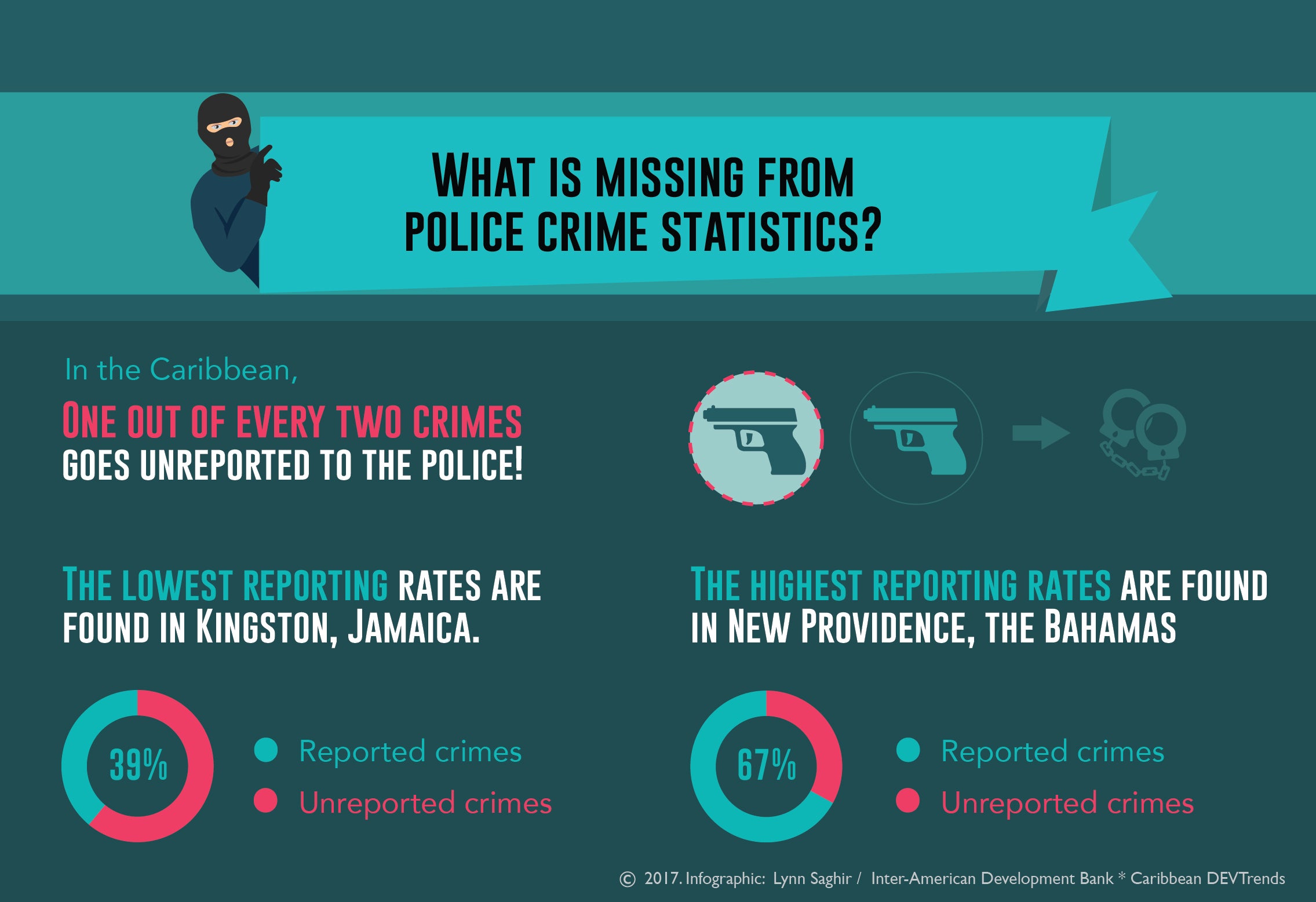 When it comes to understanding crime and violence, police records only tell us half the story (literally). But to design effective crime prevention and reduction policies we need the other half. While an important source, police statistics only capture a portion of crimes due to under-reporting and under-recording[1]. In the case of the Caribbean, the most prevalent crimes are the most underreported (assault and threat) and the most vulnerable victims (women and youth) are the least likely to report. This can lead policymakers to make poor decisions regarding policies and the allocation of resources. Victimization surveys enable us to measure the phenomenon from a primary source – the victims themselves – but such surveys are conducted less frequently in the Caribbean than in many other world regions.

The recent IDB publication, Restoring Paradise in the Caribbean: Combating Violence with Numbers (executive summary in English and Spanish here) examines the crimes that are not reported to the police according to victimization surveys of individuals and businesses. This blog post will give you a glimpse of the other half of the story.

How many crimes go unreported?

On average, 47% of crimes went unreported to the police in the Caribbean. Meaning that for every ten crimes that happen, we only “know” of five. This has enormous policy implications.  The highest reporting rates were found in New Providence, The Bahamas and the lowest in Kingston, Jamaica (39%) and Bridgetown, Barbados (43%). Reporting is close to the international average (49%), significantly higher than in Latin American capital cities (35%) for all five crimes examined here (car theft, burglary, robbery, theft of personal property, and assaults and threats).[2]

Only 46% of crimes against businesses were reported to the police, with lower reporting in Belize (20%) and Barbados (24%).

Which crimes don’t get reported?

Similar to other countries around the world, crime reporting to the police in the Caribbean is highest for car theft (84%) and burglary (70%) and lower for assaults (48%) and threats (37%).[3] More severe crimes that involved a weapon, or where medical services were sought, were more likely to be reported. Violent crimes were also more likely to be reported if there were two offenders and if the offender was a stranger rather than someone known to the victim.

Who is less likely to report?

Female, youth, and single individuals were all less likely to report violent crimes to the police, especially when the victim was known to the offender. Only 45% of violent crimes (robbery, assault and threat) committed against women were reported compared to 54% of those with male victims. Note that this figure does not include domestic and sexual violence, which generally have far lower reporting rates and are better measured through other survey methodologies. Young victims (18-24) only reported to the police in 41% of cases of violent crime.

Studying the amount of crimes that go unreported can help us understand trust in the police and community-police relations. Increasing reporting rates also stand to help improve community safety and the equity of the criminal justice system.

But most importantly, if we rely only on police statistics to understand crime, we are making policy based on only half the story. Entire groups at risk of victimization may be unknown and not taken into account. The most problematic crimes may not be those that appear in police statistics. Victimization surveys and other sources of data (i.e. health data from hospitals, school violence data, etc.) are essential to helping complete the picture and developing more nuanced crime control and prevention policies.

[1] Under-reporting is the result of citizens not reporting crimes to the police, while under-recording is when certain crimes are not registered by the police.

[2] Comparative results on reporting rates from the International Crime Victimization Survey database per world region are provided in the report Appendix 1.2.

[3] For details on both the percentage and number of individuals reporting for the five types of crime, see Appendix 1.1 of the report.