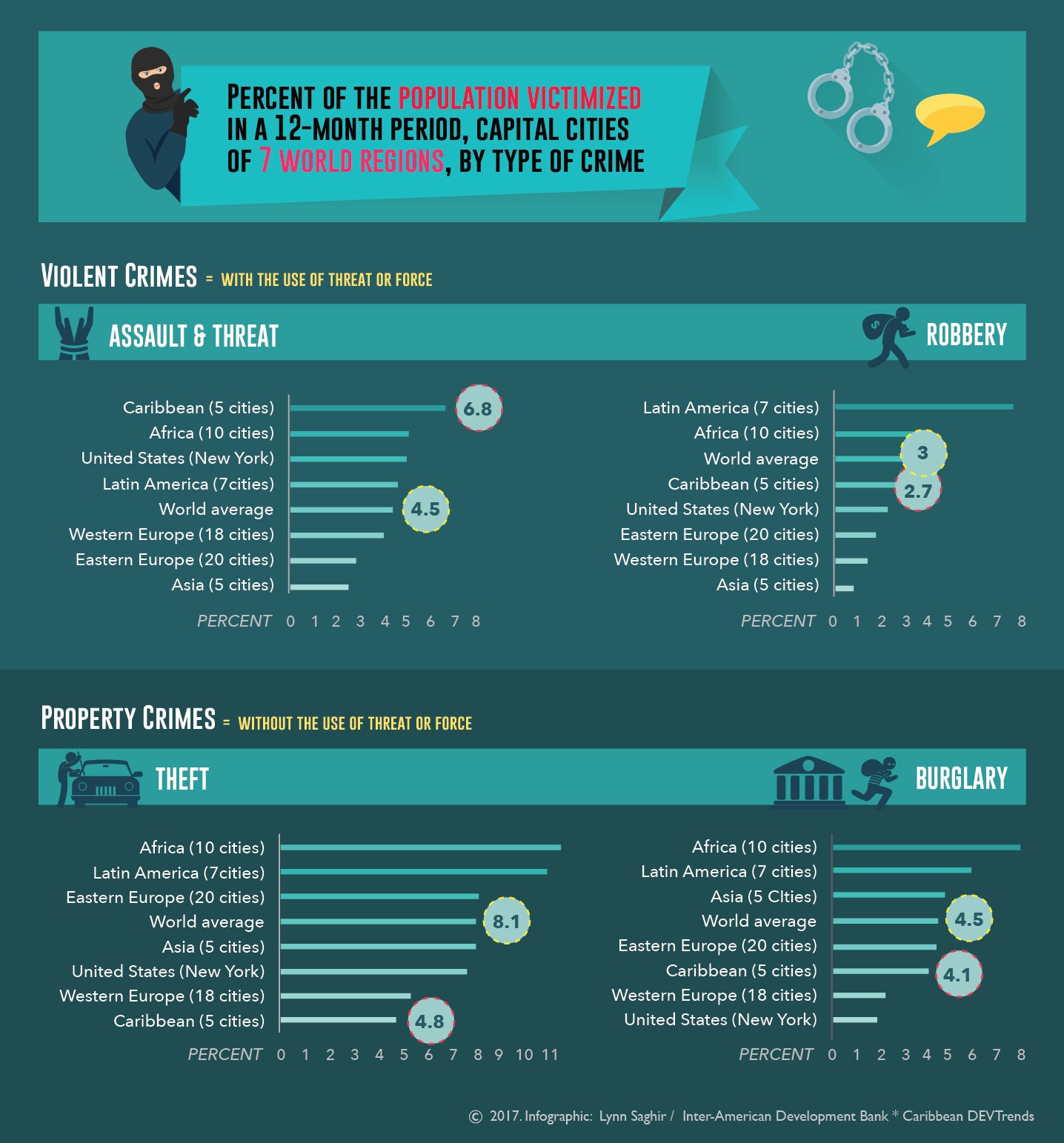 In the recent IDB publication, we set out to answer the question is crime in the Caribbean unique in some way?

The answer is YES. The study, Restoring Paradise in the Caribbean: Combating Violence with Numbers (executive summary here), uses crime victimization surveys of a representative sample of the population in five Caribbean capital cities (C5). By using universally common definitions of the main types of crime, we are able to place the Caribbean on the global map by comparing our survey findings with those of previous rounds of the International Crime Victimization Survey (ICVS) in over 70 capital cities around the world.

How is the Caribbean Unique?

The defining characteristic of crime in the region is the uniquely high level of violent crime and low levels of property crime. It has been well documented that the Latin America and the Caribbean (LAC) region has the highest homicide rates in the world[1] and within LAC, the Caribbean homicide rates stand generally above those of countries in the Southern Cone and Mexico, but below those of Central America.

Beyond homicide rates, our report found that, while victimization prevalence rates[2] for theft (without use of force) in the Caribbean was the lowest of any world region; assault and threat was significantly higher than the rest of the world (Infographic). Burglary and robbery were closer to the international average, but significantly lower than in Africa and Latin America.

We found that youth 18-24 are the main victims of these assaults and threats, and that they occur predominantly within the victim’s own neighbourhood, perpetrated by someone the victim knows. This means that policy efforts and resources ought to be directed towards interpersonal violence, which may be more effectively tackled via prevention than deterrence. The use and tolerance of violence to exert control and resolve disputes in inter-personal and community relations is a social norm reinforced by gang presence, family dynamics, and the weakness of legitimate collective entities. se we need prevention programs that focus on changing these norms and behaviours, as opposed to merely controlling the symptoms.

We know the Caribbean is unique in two keys ways: it has the highest rates of victimization by assault and threat, and this takes place mostly among young people who know each other. Knowing this is already an important step to improve policy responses to this problem. To effectively tackle crime in the Caribbean we need to understand why it occurs. The report (and future blogs) explore some of the drivers of crime in the Caribbean, and potential policy implications. These include early experiences of violence, neighbourhood characteristics, gang activity, and the availability of firearms. Stay tuned for more on Crime in the Caribbean.

[2] Victimization prevalence rates are estimates of the percentage of the population that was a victim of a particular crime in a one-year period.