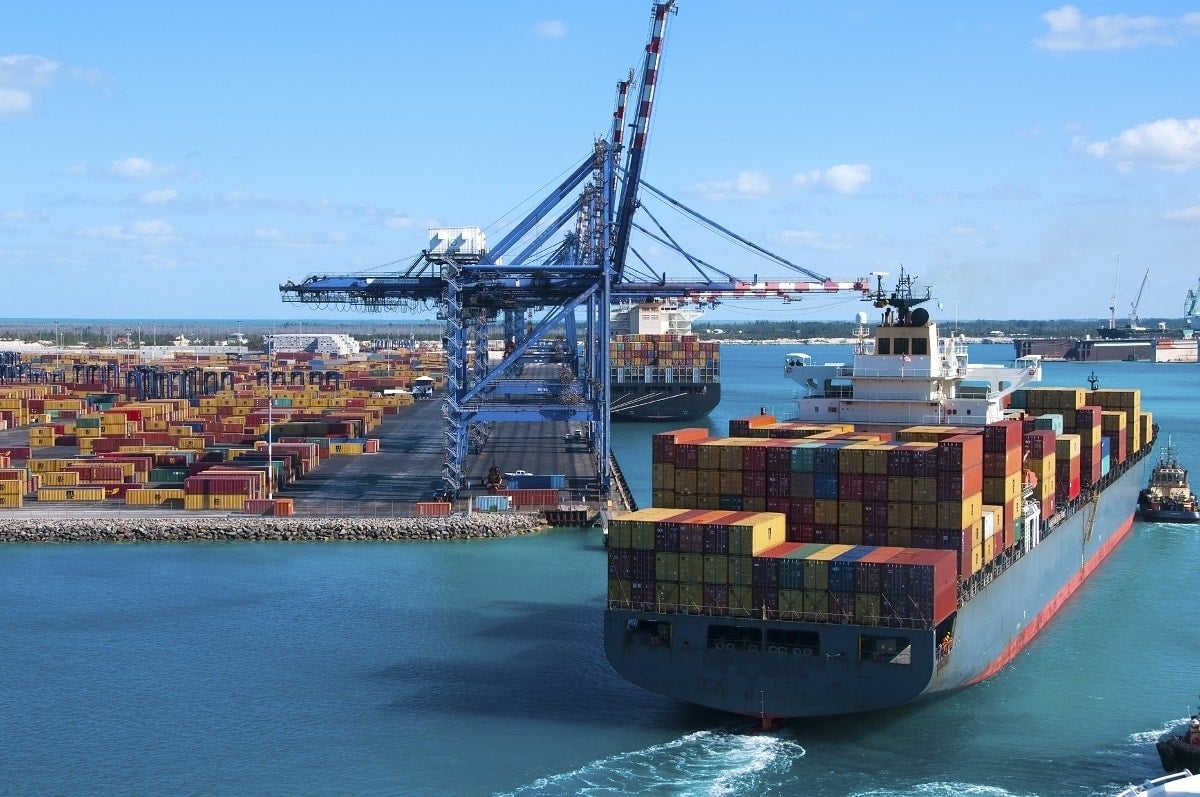 Policies to springboard the competitiveness of Latin America’s economies were a core topic during talks at the World Economic Forum for Latin America, which recently came to a close in Brazil. At the meeting, political and business leaders agreed that the recent shift in the global trade cycle, which has begun to expand again after years of contraction and stagnation, represents an opportunity for Latin America. The analysis in the IDB’s 2017 Trade and Integration Monitor of how the competitiveness of Latin American trade has evolved in recent decades will allow governments and stakeholders to identify priority courses of action to consolidate the region’s performance on the international market and make the most of the current favorable context.

Between 2010 and 2015, in the aftermath of the global financial crisis, Latin American exports grew at a lower rate than global trade flows. Likewise, the region’s share in world trade dropped from 6.16% to 6.07%. If Mexico, whose exports grew markedly during this period, is left out of this calculation, Latin America’s global market share fell by 14.8%, which is equivalent to US$92.2 billion.

These changes are explained by both the structure and dynamics of external demand and the competitiveness of the export offer. During the post-crisis period, changes in external demand made a positive contribution to the 2.5% growth in Latin American exports, albeit it a marginal one (0.3 p.p.). This was the outcome of the positive effect of the geographic distribution of exports (3.5 p.p.) combined with the negative effect of the sector-specific structure of these (-3.2 p.p.). At the same time, the competitiveness factor had a negative effect on export growth, to the tune of -1.9% p.p.

The significance of competitiveness has increased markedly in recent decades. While between 2000 and 2005 it explained less than 10% of variations in exports, in 2010–2015 this share increased to 75%. The downturn in competitiveness coincided with the end of the commodity price supercycle, which sustained the region’s export performance for over a decade. Strengthening Latin America’s ability to compete in global markets is thus a top priority for the region’s governments.

More recently, the competitiveness of almost all the region’s export sectors has been lagging, except that of primary agricultural products. The greatest loss in competitiveness was in manufactures of industrial origin (-1.3 p.p.), a change that increases to a noteworthy -4.8 p.p. if Mexico is left out of the equation. A pattern of low competitiveness was also observed in the segments with the greatest added value, as manufactures of agricultural and mining origin had a negative effect on growth and canceled out the positive effects of other primary products.

This loss in competitiveness was mainly explained by the intraregional market, which accounted for a loss of 2.7 p.p. in growth in total external sales. Latin America also lost ground to global competitors within the European Union market. It benefited from greater competitiveness in other markets, particularly in developing Asian countries. However, the different groups of countries performed unevenly.

COMPETITVENESS EFFECT ON EXPORT GROWTH FOR LATIN AMERICA AND THE CARIBBEAN 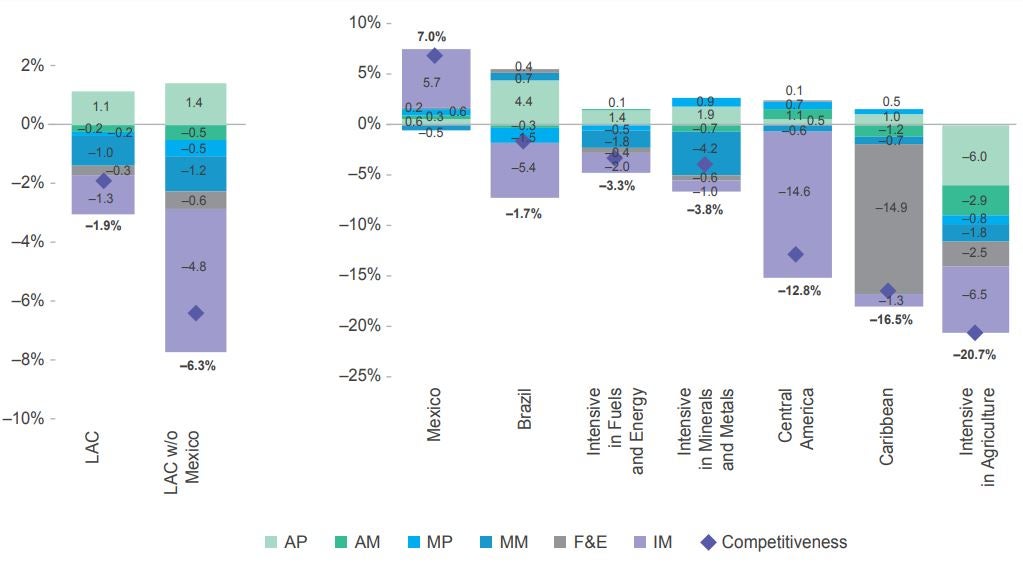 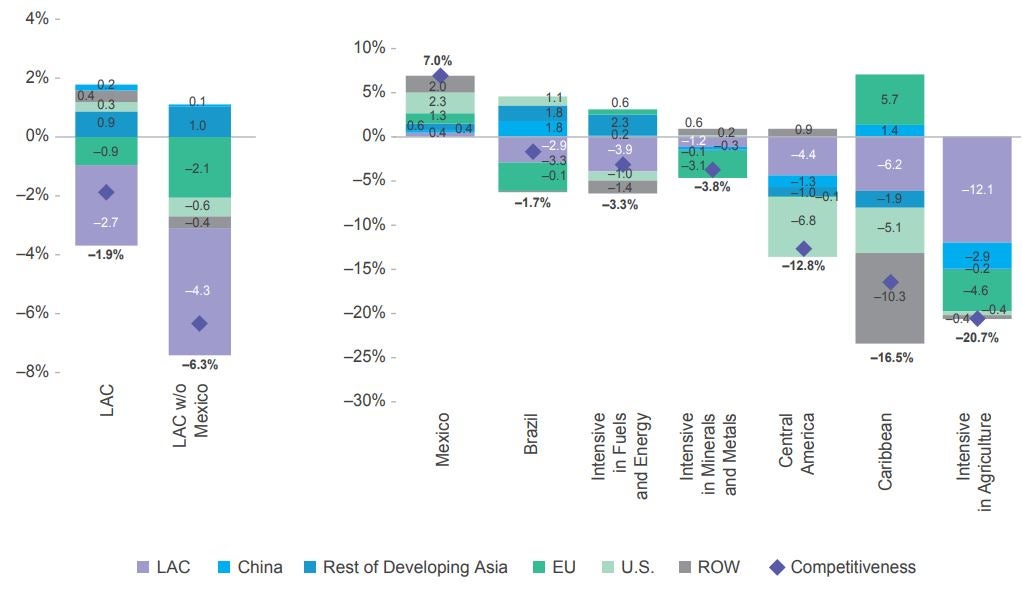 This summary outlines the sectors and export markets that Latin America could take better commercial advantage of by increasing the competitiveness of its export offer. The 2017 Trade and Integration Monitor provides a more precise analysis of the current situation and focuses particularly on who the region’s competitors were and how their respective market shares in specific sectors evolved.

This analysis is illustrated in much greater detail in the report, which suggests that if the countries of Latin America and the Caribbean are to take advantage of the current shift in global trade, they urgently need to implement productivity stimulus policies to improve the region’s competitive position within international markets. Eliminating obstacles to commercial integration so as to regain the ground lost in the regional market should be at the heart of this strategy. It is also an opportunity for Latin America to take advantage of breakthrough technologies such as e-commerce to facilitate the internationalization of its firms.