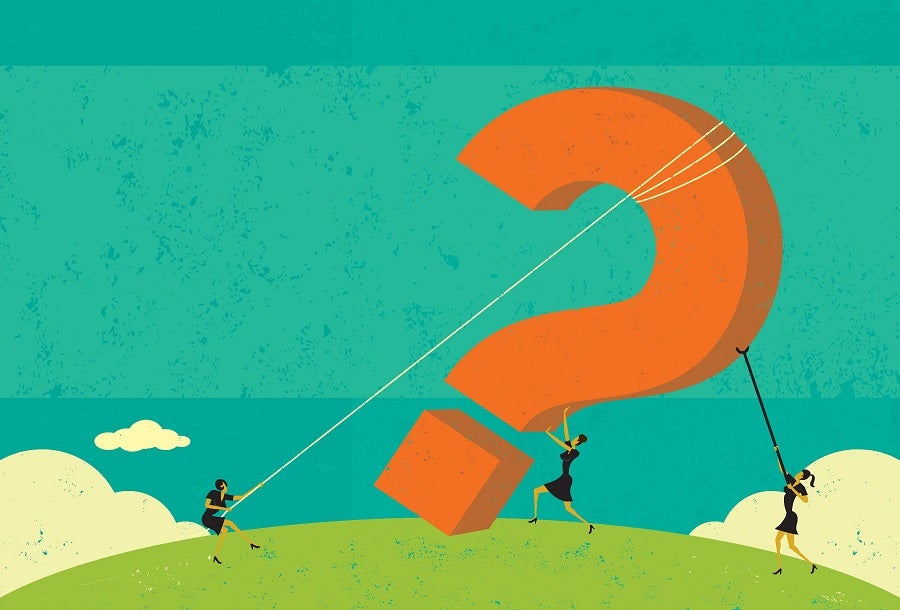 Over the last 30 years, in Latin America and the Caribbean (LAC), preferential trade agreements (PTAs) were the instrument of choice for moving toward more integrated markets. Although PTAs were successful in helping countries to move beyond the limitations of earlier, more inward-looking integration initiatives, their proliferation led to a regulatory architecture that has not necessarily given companies the agility they need to compete in the global 21st-century economy.

The most recent IDB flagship report on integration and trade, Connecting the Dots: A Road Map for a Better Integration of Latin America and the Caribbean, provides a detailed analysis of the regional integration policies adopted by LAC during the last quarter of a century. It also sketches out a roadmap for closing the gap between expectations and results.

One factor that is particularly significant given the current trade context, characterized as it is by an intensification in trade frictions, is that the convergence toward a unified regional market would function as an effective insurance policy against the uncertainty around conditions for accessing global markets.

Over the last few decades, LAC’s global market share has gradually shrunk. As is analyzed extensively in the most recent edition of the Trade and Integration Monitor, this is largely due to a loss of competitiveness. The figure below shows that in 2010–2015 alone, LAC’s global market share went from 6.16 percent to 6.07 percent. Although this variation may seem insignificant, it represented a loss of $14.3 billion.

Mexico’s performance played a decisive role: when it was left out of the calculations, the region’s global market share fell from 4.12 percent in 2010 to 3.5 percent in 2015, which represents a 14.8 percent loss in just five years. Protectionist restrictions affecting access to markets that are key for the LAC will further accentuate this trend.

LATIN AMERICA AND THE CARIBBEAN’S GLOBAL MARKET SHARE
(In percentages and percentage points, 2010–2015) 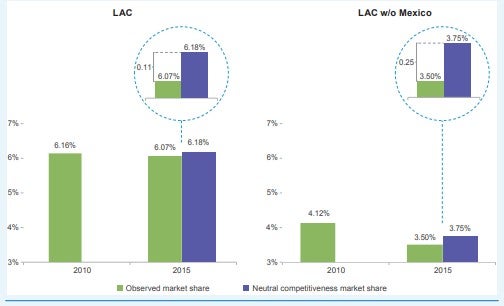 Note: The Caribbean has not been included. Source: IDB Integration and Trade Sector with data from the BACI (CEPII).

To evaluate the “insurance policy effect” of regional integration, the report presents simulations of a computable general equilibrium model for how exports of goods from LAC would vary in three alternative global trade scenarios, taking 2014 values as a baseline. The first, which is described as the status quo scenario, assumes that there will be a return to mega-agreements like the TPP (Transpacific Partnership) and the TTIP (Transatlantic Trade and Investment Partnership), both of which were promoted by the United States.

The second scenario supposes that China will take the global lead by concluding the RCEP (Regional Comprehensive Economic Partnership), a mega-agreement with its trade partners in the Pacific region. The third scenario is a world plagued by trade frictions, which are simulated through a hypothetical 20-percentage-point increase in the global bilateral tariffs that were in force in 2014.

“Latin American integration is the dominant strategy in all three trade scenarios.”

To assess LAC’s response in each of these scenarios, the current fragmented state of regional integration was compared with the potential implementation of a regional free trade agreement (LAC-FTA). A LAC-FTA would entail the total elimination of tariff barriers between Latin American countries and the adoption of a harmonized set of cumulative rules of origin.

As is indicated in the above table, which summarizes the impact on the region’s exports, moving toward deeper Latin American integration is clearly the dominant strategy in all three trade scenarios. The impact this would have is particularly significant in a scenario of increased trade frictions, as it would bring down the restrictive effect of global protectionism by 40%.

In the other trade scenarios, the absolute impact on LAC exports is less sizeable, as Latin American countries are only partially or indirectly affected by mega-agreements. However, it is significant that full Latin American integration would completely offset the negative consequences of the preference erosion or of the trade diversion effects caused by mega-agreements.

In conclusion, LAC’s international integration strategy is at a crossroads as it is facing both structural and situational challenges. The region needs to reverse the structural erosion of competitiveness that has led to a progressive loss of global market share. From a more short-term perspective, it also needs to consolidate its export performance, given the volatility and the growing risk stemming from the external environment.

In a global economy that is increasingly characterized by competition between major economic powerhouses or mega-agreements and by the threat of proliferation of global barriers, the limits to LAC’s current fragmented integration system become apparent. Aiming for a truly unified regional market through gradual, pragmatic convergence is an insurance policy for the well-being of millions of Latin American citizens.