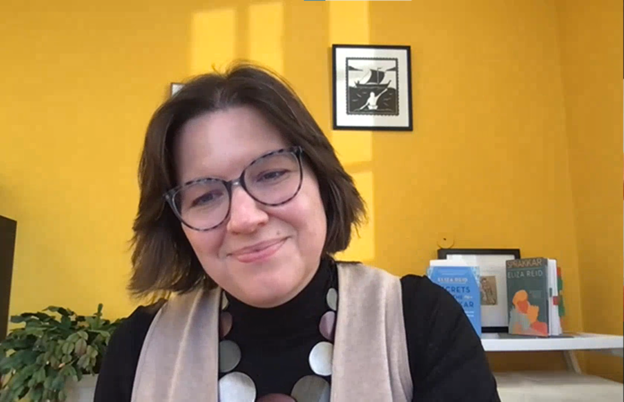 Eliza Reid, entrepreneur, author, speaker, and first lady of Iceland, the most gender equal country in the world, wants us to move past the discussion of “why do we need gender equality?” to “how do we achieve this goal?”. This is a question that Icelanders have already fully integrated in their day to day life.

For the last 13 years, Iceland has ranked first in the World Economic Forum list of countries that are closing the gender gap. To get to this point, for the past few decades, Iceland has focused on putting in place laws and policies aimed at closing the gaps between men and women. Those measures are excellent study cases and examples that other countries can use to promote gender equality.  But in her book “Secrets of Sprakkar”, Eliza goes beyond these policies and explores gender equality from the angle of the women who keep on breaking barriers and are role models to others in Iceland and internationally. “Sprakkar” is an ancient Icelandic word that means “extraordinary or outstanding women”.

In BID Academy’s Voices in Action, a live conversation with Eliza explored what advice Iceland has to give countries from Latin America and the Caribbean, and some transformations we can aspire to see.

A few days after the event, the IDB´s Gender and Diversity Division had the opportunity to interview Eliza on how equality looks like in Iceland, how people can become better role models, and even how to promote positive masculinity.

IDB: “According to the Global Gender Gap Report, while Iceland ranks first for gender equality in the world, Latin America and the Caribbean will still need 67 years to close the gaps between women and men. That is, unless we start doing more. Eliza, could you tell us what does living in a more gender equal country actually look like in real life?”

Eliza: “In terms of tangible examples, I want to mention something from the beginning of my book. There, I recall this moment, when I was working in a very male dominated industry, and the chair of the board of the company where I was working was nursing her baby while she was leading a meeting. And nobody cared. That was almost 20 years ago, but it has stuck in my mind. That is the kind of thing you see all the time in Iceland – in outdoor parks, for example, there are a lot of men with their kids as well. They’re also dedicated parents and do things with their kids quite often”.

IDB: “In a previous interview you mentioned how increasing female leadership can have a positive effect to close gender gaps in any countries in the world. Can you give us an example of how women in decision making positions can create a positive impact?”

Eliza: “Well, peace negotiations are a huge one. Studies have shown that when women are at the table, these are longer lasting and more effective. And in the workplace, the positive effects of women leading companies is a whole argument for diversity itself too. It´s our human nature to choose teams and approaches we already know – so if we´re sitting at a table with people who are like us, we feel comfortable. But when we are working in an industry where you need to rely on change, and progress and new ideas, then you need that diversity at your table. Both in terms of new approaches and in problem solving. It´s healthy to the organization as a whole, it helps us grow.”

IDB: “Could you elaborate on how diversity is key to achieve gender equality? How did you integrate diverse voices into “Secrets of Sprakkar”?

Eliza: “Diversity was so ingrained into what I wanted to do from the beginning – I didn´t add it at the end. And in some senses, I think you can always be more diverse as well. I, as a woman of foreign origin in Iceland, am already representing a facet of intersectionality when I´m talking about myself. And I see the country from that lens. I wanted to write an uplifting book, a “love letter to the country”, and part of that is making a realistic portrayal. Not writing a marketing brochure that ignores the challenges. And it is a challenge for us to remember that greater gender equality is not gender equality for only a certain exclusive group of people. That´s something Iceland needs to work on.

When I was writing the book, I interviewed queer women, women of foreign origin, a woman with a disability, young and older women, women from the countryside… But I also didn´t necessarily want those identities to be their defining characteristics as subjects in the book. I didn´t want to write a book that was prescriptive, I don´t think it is my place to do so. But I did want to tell the stories of people that could inspire everybody. And one of the reasons for having more diversity is that I wanted to choose people who aren´t the obvious choices. A lot of us won´t be the president of a country [Iceland had the world’s first democratically elected female head of state in 1980], but I wanted to write a book that shows how everyday people can live lives that work toward more equality too”.

IDB: “You are a strong believer of the importance of encouraging women to be role models. You have become one yourself, using a position of great visibility to bring awareness to these issues. But you also insist on how important it is for men to be a part of this cultural and societal change. Can men be role models too? How so?

Eliza: “Of course, and they should be! This is gender equality, it´s not just women´s rights, it´s not a women´s issue, it´s a human rights issue. And men are human beings too. I think this is one of the biggest challenges- people think of gender equality as something women are responsible for improving. If we want to look for areas where we need solutions, having men at the table is also part of that diversity perspective.

It´s important for men to stand up and say “I think I´m a better parent because I took time off when my children were born”, or “because I spend time with my kids I´m happier with my life”. We need men giving the example.

We have become much better at telling girls they can be whatever they want, but we still have a pretty narrow definition of what it means to be a man. Working towards greater equality should be seen an opportunity for men to improve their lives too”.

IDB: Following on this topic, we have heard how you and your husband seek to be good role models for your children, three boys and a girl. Do you have any advice for other parents who seek to teach gender equality and hand down these values to their children, especially in these times filled with so many challenges in society?

Eliza: ”There is one example I think a lot about regarding my sons, in the context of gender equality. I hope I´m raising them to be respectful and responsible citizens. But I know that inevitably in life, they will be in places that I don´t have access to where they will be witnesses of misogyny and intolerance. And they will see that more than I will. What I keep saying to them is “you need to have the courage to speak up when that happens and say it´s not ok”. And that is really hard, but so important to shift the dialogue. To not only push it into those quiet corners, for everybody to understand it´s not acceptable. We cannot do that unless other allies are saying “you know what, that wasn´t funny”, or “don´t treat her that way”.”

IDB: “You are a mother, but also an author, an entrepreneur, a speaker, and of course, first lady of Iceland, a position that you took on in 2016. However, beyond this role you have now,  what are your plans for the future? What do you hope to achieve, beyond this position you have at the moment?”

Eliza: “It is such a privilege, serving in this role, but that said, I´m not going to serve in it forever and I know that. I sometimes think about the fact that if you are a former president, you are set for what you want to do. You can go on and be a professor, do talks… But as a former first lady, even though there are a lot of skills you develop, it´s not quite as tangible. You have to go out and actively pursue your goals. To me, I don´t yet know what that means, because I´m not there yet, I want to serve in this capacity to the best of my ability right now. But I hope I can use some of the skills and confidence and experience I´ve earned doing this with whatever projects I pursue afterwards, like writing another book or doing more public speaking.”

To find out more about Eliza’s book, story and thoughts, watch Voices in Action full video.