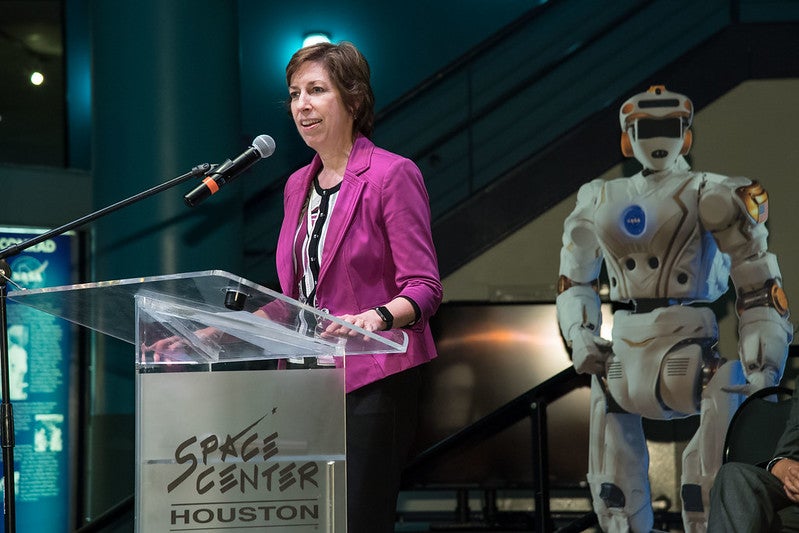 Ellen Ochoa never dreamed of becoming an astronaut. Still, it became her goal and passion after she studied physics and watched Sally Ride become the first American woman in space. As she progressed in her education and career, the encouragement she received from educators and the opportunities and visibility provided by her supervisors and mentors ultimately pushed her to break through all the glass ceilings into space itself. In 1993, Ellen became the first Hispanic woman to go to outer space and later became the first Hispanic director of the Johnson Space Center.

For many women, the dream of becoming an astronaut, physicist, scientist, engineer, or mathematician begins when they see other women succeeding in their areas of interest. Research shows that role models represent and expand what is possible, inspiring women to be more ambitious and model the behaviors that lead to professional success. Studies show that exposure to female leaders and role models influences adolescent girls’ career aspirations and educational attainment.

Ellen was inspired by the women who came before her. She also attributes her success to the sponsors and mentors who propelled her career forward. These individuals encouraged her to take risks, go beyond her comfort zone, and pursue high-visibility assignments. Research shows that women with sponsors receive higher pay and more high-profile projects and report a more satisfactory pace of promotions than those without. Yet, men are 45% more likely to have a sponsor than women across the technology sector. Similarly, for women entrepreneurs in STEM, having a quality mentor network has been shown to play a critical role in their growth, especially in fundraising.

STEM is about curiosity

After going to space, Ellen became a sought-after inspiration who spoke in girls’ schools and underserved communities, encouraging them to pursue a career in STEM. Ellen’s message is clear – STEM is about curiosity, creativity, problem-solving, and working in teams. These activities interest girls, yet this is not the message they are receiving.

Typically, they learn about male scientists or come to accept the stereotype that the hard sciences and math are for boys. In fact, in most countries in Latin America and the Caribbean, third-grade girls outperform boys in math. However, by sixth grade, this advantage disappears.

This pattern continues at the university level. Women are significantly underrepresented among engineering, IT, industry, and construction graduates in Latin American countries. The most significant gaps are in El Salvador and Chile, where women make up only 17% of graduates in these fields.

Considering the growing opportunities for STEM jobs and the changing labor market, transforming girls’ perceptions and career aspirations in these fields is more important than ever. We invite you to listen to the IDB’s Gender and Diversity Chief, Maria Caridad Araujo’s interview with Ellen Ochoa.

This interview is one in a series of podcasts produced by the Inter-American Task Force on Women’s Leadership dedicated to giving visibility to women who have been the first to reach a leadership position and break the glass ceiling in their sector.