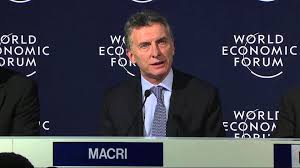 Mauricio Macri presented a face of change to world leaders in Davos last month, the first Argentine president to represent the South American country at the World Economic Forum in over a decade. Macri’s efforts to normalize relations with international stakeholders reflect a new direction in policies and international relations that have taken hold since December 2015 when he came to power ending 12 years of Kirchnerist leadership. But his victory, at the head of a coalition of opposition parties from the center-right to the center-left, also represents an exception. It is an exception to what has been a turn to both the left and to non-ideological, or non-programmatic and populist politics, in Latin America in recent years.

The Database of Political Institutions (DPI), currently at the IDB, reveals those shifts in Latin America through numerous variables that code the ideology of governments. It illustrates the predominance of the right in the 1970s , 1980s, and some of the 1990s and then, as a result of disenchantment with the results of reforms under those governments, the rise of leftist — as well as non-programmatic and populist — forces at both the legislative and executive levels.

Consider first the legislatures. These were characterized from the 1970s through part of the 1990s by a vast predominance of conservative leadership. Neoliberal policies, promoting economic liberalization, took root particularly in the 1990s after the failed policies of the previous, lost decade. Neoliberalism aimed at opening up national markets to the world. Right-leaning political ideologies helped advance these neoliberal programs and drive Latin America’s integration into the global economy.

By the turn of the new century, however, a general disenchantment with the results of the reform period, particularly in terms of employment and the continuous existence of high levels of inequality, incited a surge of social movements advocating for social justice. This unrest was reflected in the rise of Mexico’s zapatismo, the movimento dos trabalhadores rurais sem terra (MST) in Brazil and Argentina’s piquetes. It precipitated at the legislative level a decline in right-wing representation and an eventual increase in leftist seats. Most significantly, it led to a rise in non-programmatic parties, which were small, often transitory parties, without an ideological anchor and linked to populist and charismatic leaders.

The reshuffling of forces that resulted can be seen in Figure 1, which is based on the DPI. It shows the political alignments of legislators representing the three main government parties and the principal opposition party in countries throughout Latin America. Three lines shows the share of legislative seats belonging to each political ideology over time, categorically divided into center, right and left. The purple line traces the share of non-programmatic seats in legislatures.

As can be seen in Figure 1, right-wing representation continued to dominate regional legislatures through the 1980s, until it began to decline in the late 1990s. There is a particular spike in 1993 on the graph coinciding with the victory of the Christian Democratic Party in Chile and the Paraguayan Colorado Party that year. Then there is a decline in right-wing seats, as those of non-programmatic parties rise in the late 1990s and 2000s and leftist parties gain seats, especially after 2004.

Meanwhile, social disillusion with neoliberalism had particular success at the executive level, as a “pink tide” of leftist leaders took office. As seen in Figure 2, the growth of socialism is reflected in Uruguayan Tabaré Vázquez’s rise to power in 2005 as well as in the victory of Evo Morales and the Movimiento al Socialismo (MAS) or Movement to Socialism in Bolivia later that year. These victories marked a reinforcement of the socialist trends which had begun with Hugo Chavez’s 1998 victory in Venezuela. They continued to gain strength during 2006 with the rise to power of Michelle Bachelet and Rafael Correa in Chile and Ecuador respectively, as well as the re-emergence of Daniel Ortega as president of Nicaragua. Álvaro Colom also brought socialism to Guatemala’s government in 2007. Cristina Fernández de Kirchner, who took office that same year in Argentina, extended the wave of populism that lasted over a decade.

What will come now is hard to predict. Macri rode to victory in part by forming a coalition of opposition parties and embracing social justice values. Poverty and inequality remain huge issues in Latin America. Regardless of how the political winds shift, it is hard to imagine the region coming full circle to the alignments of the 1970s and 1980s.

Recent electoral results in Venezuela and Bolivia, along with the decline of Kirchnerismo in Argentina and the Partido dos Trabalhadores (PT) in Brazil, may also mean that citizens are ever more wary of giving too much power to leaders for too long. And it could signify that the region has some underlying transparency and accountability problems that cross the ideological spectrum. Still, as it has been argued before, it will be very difficult to generate long term gains if the region doesn’t have programmatic and long lasting parties that allow for stable and publicly-minded policies.

*Guest Author: Ivana Litaveez is a candidate of the Master of Public Policy and Global Affairs program at the University of British Columbia, with a background in international relations and economics. She has worked as part of a team at the University on the Database of Political Institutions (DPI).