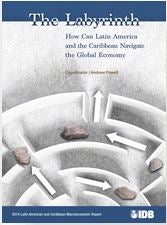 Most countries in Latin America and the Caribbean are running significant structural fiscal deficits and debt levels are rising. At current rates of growth, the unpleasant arithmetic of debt sustainability indicates that unless something changes the continent will soon lose its much heralded “improved fundamentals” and may even risk becoming the “continent of crises” once again. How did we get here?  What can countries do and how urgently should they act?  These questions are the focus of the 2015 Latin American and Caribbean Macroeconomic Report.

A widespread claim was that the region had finally escaped the prison of pro-cyclical fiscal policy and responded to the 2008-09 global crisis with countercyclical measures.  This statement has proven to be false.  Both statistical analysis and a close inspection of the types of policies adopted reveal that the response to the crisis was simple fiscal expansion. Fiscal expansion during a downturn that is not removed when that downturn passes cannot be labelled countercyclical.  Why did this happen?  Automatic fiscal stabilizers are weak and any presumed anti-cyclical response had to be through discretionary policy. The types of policies pursued, while well-meaning, were inflexible measures boosting government salaries and transfers (i.e. consumption) that did not boost growth, did not grow fiscal space, and proved impossible to remove.

There was also a measure of bad luck.  Actual global growth each year has been consistently below projections and commodity prices have fallen more than anticipated.  But a sharp increase in inflexible spending that did not enhance growth in an uncertain climate was not what the doctor ordered and can certainly not be described as “anti-cyclical.”  Adjustment is now the name of the game and several countries are already pursuing restrictive policies.

Successful adjustment will require changes in tax or expenditure policies that do not hurt vulnerable groups, that are politically sustainable, and that translate into an actual reduction in the debt ratio. That means selecting policies that will have a minimum adverse effect on growth and protect recent social gains. Policies will differ across countries.

In countries with high tax burdens, raising taxes further is unlikely to work.  Improvements in tax administration, rationalizing and simplifying taxes, and removing ineffective tax subsidies are the first policies to consider. Addressing high levels of informality is a second medium-term objective. Similarly, in countries where public expenditures are low, reducing them further would be counterproductive.  But there are ample opportunities to improve the efficiency of spending and to better target social expenditure.  Public policies should enhance the incentives to participate in the formal labor market and improve productivity and growth.  Low oil prices also offer an opportunity:  a green tax on fossil fuels such that lower crude prices are not fully passed through to consumers would have environmental benefits as well as bring in added revenue.

How fast should governments adjust? For a country growing close to potential (in which case fiscal multipliers are likely to be low) but with a significant structural fiscal deficit, increasing debt and high interest rates, the answer is straightforward: adjustment should be swift. If a country has a negative output gap and, potentially higher multipliers, and if interest rates are low, then adjustment should be gradual.  For those countries with higher debts, higher interest rates and a negative output gap, the speed of adjustment is a delicate trade-off.  Adjust too slowly and the interest bill will mount and more adjustment will have to be done; adjust too fast and growth may be hurt, rendering the effort counter-productive. In these cases, perhaps the critical aspect is to ensure that an explicit and credible adjustment plan is in place such that outcomes are predictable and interest rates can be maintained relatively low.

Choosing adjustment versus growth, through productive development policies, is a false dichotomy and for those countries in the region with higher debt ratios and deficits, choosing just one of these two is unlikely to be successful; many countries now need to do both. Latin America and the Caribbean faces its stiffest test since the global crisis.  At that time, the fiscal response was significant, but flawed, and with other factors has led to the harsher tradeoffs facing policymakers today. The region needs to select better policies to boost growth and maintain the good macro-fundamentals that will allow for sustainable growth and truly countercyclical policies in the future.