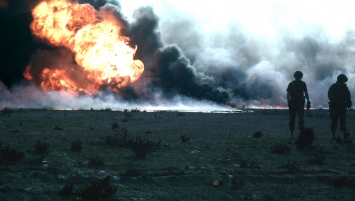 The explosives ignite, the pipeline bursts, and tens of thousands of barrels of oil pour into grasslands and rivers, destroying a vital source of income and large quantities of animals and fish. Frequent attacks on pipelines by leftist rebels over the last 20 years have devastated fragile ecosystems in Colombia and cost the government hundreds of millions of dollars in lost royalties. Yet the violence linked to oil production in Colombia is hardly unique. From Nigeria and Sudan to Indonesia and the Mideast, oil has been both a blessing and a curse, a boon and, in the time-honored words of OPEC founder Juan Pablo Pérez, the devil’s excrement.

Today, the rebel, Revolutionary Armed Forces of Colombia (FARC) is currently demobilizing under a peace agreement ratified in November. The National Liberation Army (ELN) is in peace negotiations with the government. But struggles over oil wealth continue to wreak havoc in many other parts of the world, posing a challenge to policymakers who would rather see oil as the foundation of prosperous welfare states than a fount of revolt.

A key issue is finding the right ways to distribute that wealth, a matter taken up by World Bank economists Tito Cordella and Harun Onder in a 2016 study. Small transfers of oil revenues from a nation’s central government to its regions may help strengthen the social contract. But, small transfers, they argue, may also provide regions with just enough money to raise an insurgent army and rebel in the hopes of gaining the much larger oil treasure held by the central government. Indeed, as explained by Cordella at a political economy seminar sponsored by the IDB’s Research Department, large transfers of money make more sense from a conflict point of view because they leave the central government with less resources to fight over.

Take the case of the Kurdistan Regional Government (KRG), which in recent years has been in a dispute with the central government in Iraq over the percentage of revenue it should get from the country’s oil production. A 2003 agreement assigned the Kurds 17% of fiscal revenues― 90% of which come from hydrocarbons. That may have kept the country together, especially now that both parties have a common enemy in ISIS. But by allowing the Kurds just enough money to develop autonomous governmental institutions and a military force, the central government may also have sowed the seeds of an independent Kurdish nation. By contrast, a large fiscal decentralization, or transfer, benefitting the Indonesian province of Aceh appears to have been key to a 2005 agreement that ended a nearly 30-year rebellion by the Islamist Free Aceh Movement (GAM).

Another concern is whether oil wealth should be transferred directly to people, as is done in Alaska, or provided to subnational governments. Where taxation is inefficient, as in many developing countries, transfers to subnational governments may provide much needed funds for investment. But by the same logic, such transfers could also enrich local governments for insurrection in a way that would not occur if those governments had to go through the costly and time-consuming process of taxing their citizens for a rebel army.

It is an intentionally simple model. The authors seek to understand which kinds of transfers trigger conflict and which facilitate peace in different situations. But because it is only a model, it cannot explain everything. It is subject to the countless variations of history, tradition, territory, ethnicity, and religion that exist in the real world.

Ultimately, it is probably the institutional strength of a nation that makes the biggest difference. Norway, a large oil producer, doesn’t pay oil dividends to individuals or transfer large chunks of money to local governments. Instead, it runs an immense sovereign wealth fund to help it withstand global turmoil and salt away money for the future. It can do so because it has strong democratic traditions and institutions that make it highly unlikely that citizens would arm themselves against the state. By contrast, in South Sudan, where almost all government revenues come from oil, institutions are undeveloped and fragile, and civil war has been raging since 2013.