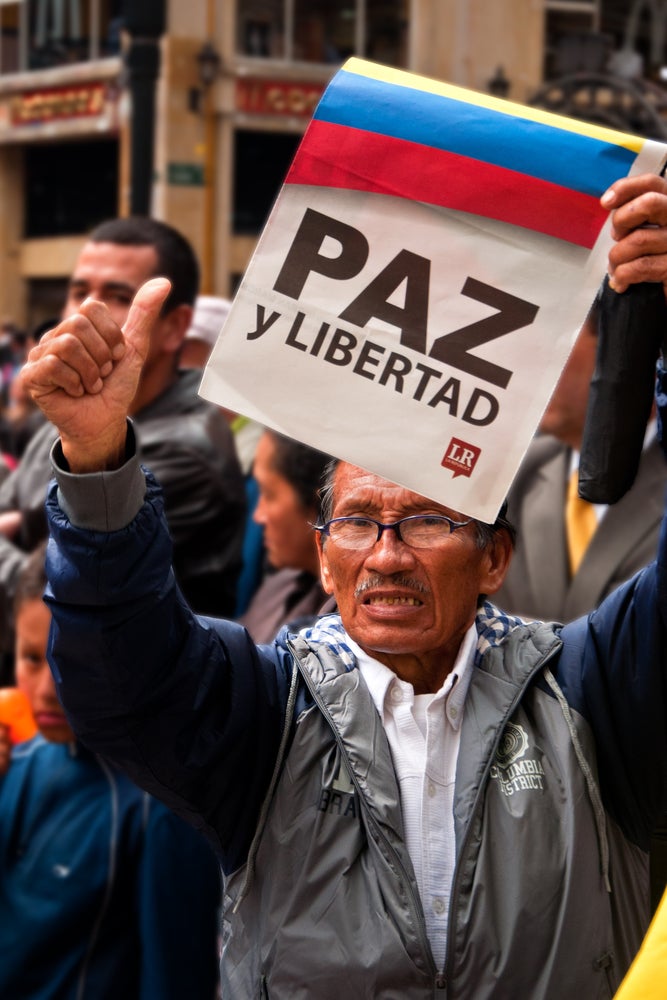 On Oct. 7, Colombian President Juan Manuel Santos became the sixth Latin American to win the Nobel Peace Prize as he was recognized for his efforts to end a 52-year-long civil conflict, the last major war in the Americas. But for supporters of Colombia’s peace process, it was a bittersweet moment. Eleven days earlier, the president had clasped hands with his sworn enemy, Rodrigo Londoño, leader of the Revolutionary Armed Forces of Colombia (FARC), and signed a peace agreement to bring an end to hostilities between the government and rebels. Many in the crowd at the peace ceremony, including 15 Latin American heads of state and United Nations Secretary General Ban Ki-Moon, erupted in applause. Some joined Santos in chants of “No More War.” Then on Oct 2, six days after that ceremony and five days before the awarding of the peace prize, Colombians rejected the peace agreement in a referendum by just over 60,000 votes or 0.5% percentage points.

The Nobel Committee’s award, despite the rejection of the peace deal, sought to keep the hope for some kind of settlement alive. It was intended, as the Nobel committee said in its award announcement, to “encourage all those who are striving to achieve peace, reconciliation and justice in Colombia.” But what happens next is anyone’s guess.

For now both the government and the FARC have committed to abiding by a ceasefire. Moreover, few analysts think that Colombians want to go back to a conflict that has killed more than 220,000 people, driven more than 5 million from their homes, and put large areas of Colombia off-limits to ordinary citizens. The immediate questions instead revolve around how to reconcile opponents furious that the agreement allowed FARC leaders accused of massacres, drug trafficking, kidnapping and extortion to escape jail time by confessing their crimes. Opponents also were angry that the FARC, converted to a political movement, would be guaranteed 10 seats in Colombia’s congress, and that ordinary FARC guerrillas would receive cash payments to ease their transition to society.

A new agreement may have to be negotiated and approved so that a larger share of the population feels that the FARC is not getting off too easy. But even if that happens, the next steps could be even harder. Some 7,000 battle-hardened fighters from the FARC will have to be reintegrated into society. That means training and employing people who have spent most or all of their lives in remote encampments in the mountains, savannahs and rainforests of Colombia’s hinterlands and have virtually no experience in 21st century urban life. It means providing basic labor skills to young and even middle-aged people with limited literacy and numeracy and giving them a push into the modern economy.

Many other post-conflict efforts have stumbled or even failed over exactly such challenges. After the peace accords of the 1990s in El Salvador and Guatemala, for example, large numbers of ex-combatants struggled to find jobs or start their own businesses. As a result, some of them reverted to criminal behavior. The decade-long civil war in Sierra Leone ending in 2001, similarly left many ex-combatants with minimal education and jobs training, making them easy recruits for criminal gangs.

In 2015, the IDB produced a flagship study The Early Years: Child Well-Being and the Role of Public Policy, that identified the key components of young children’s intellectual and emotional development and offered suggestions as to how governments could intervene in a cost-effective manner to improve long-term outcomes. The next flagship study, due out in mid-2017, will again look at skills acquisition, expanding the scope to adolescence and adulthood. This will include a chapter on training adults for the labor market, with specific recommendations on what governments can do to support training centers and public-private partnerships for corporate apprenticeships.

A key emphasis is the importance of teaching not only sector-specific technical skills, but also socio-emotional ones. This, as discussed in a previous blog, includes such essentials as the ability to work in a team, take orders, and provide respectful service to clients. It also involves self-esteem to empower decision-making in the work place.

Colombia, with a history of demobilizing deserting guerillas and right-wing paramilitary groups, already has well-developed mechanisms and institutions to promote the reinsertion of combatants into society. The Colombian Agency for Reintegration (La Agencia Colombiana para la Reintegración) runs psychosocial, health and job training programs for people who want to enter the labor force and start their own businesses. A 2010 law provides tax incentives for companies that hire former members of armed groups. Extensive planning has been done to help former guerrillas acquire land and credit for farming and commercialize their products. Still, the hope is that IDB research on adult skills will add to the toolbox of policymakers in Colombia if they are able to get the peace process back on track by assuring all their compatriots that the terms of the agreement are fair.

Colombia still has a chance to enter a new era of peace, involving the immense challenge of bringing large numbers of ex-combatants back into society. If so, the importance of getting it right will not only shape its democracy and economy but provide key lessons for other nations attempting the necessary transition from war to peace.