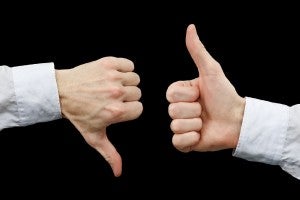 How can governments guide people to make choices that would improve their  welfare? Traditionally, the focus has been on changing prices; for instance, higher cigarette taxes encourage people to smoke less. Lately, “nudges” have become a favorite tool, and are becoming increasingly popular  in developed and developing countries alike.

Latin American governments are no exception to this trend. The question is, what features should messages or nudges have to steer people toward behaviors that would help countries move closer to their development goals?  A series of research projects sponsored by the IDB in Argentina sought answers to this question by examining the effectiveness of information campaigns to affect natural gas consumption and tax compliance. The conclusions offer insights into what is right and wrong about different messaging strategies and how messaging, when well-designed, can buttress government policy (Castro and Scartascini, 2014).

Information campaigns can clearly alter behavior in a subtle manner.  Moreover, they can do so without resorting to politically or financially expensive regulations.  But there are some “do’s” and “don’ts” that clearly influence the effectiveness of these campaigns. To be persuasive and have a  “nudging” or forceful effect, they must have certain features: they must be well-designed, with salient, clear and concise messages; they must have images and text that are consistent with each other and do not rely too much on people’s mathematical abilities; and they must encompass material that is credible to the public and is not offensive.

In at least a few instances, what didn’t work in governments’ efforts to nudge was as instructive as what did. For example, a 25% price increase led to an approximately 4% decrease in residential consumption of natural gas in the Greater Buenos Aires area, revealing  the role of prices  in  driving individual decisions. The drop in consumption was high relative to standard results in the literature. But the local government failed to explain the nature of its progressive, new tariff schedule. In  that schedule  those with higher consumption faced a higher cost per cubic meter than those with lower consumption and consumers were re-categorized in each billing cycle. A simple clear explanation could have  led to even greater decreases in consumption. But because the policy design was too complex and lacked guidance, the government undercut its efforts to reduce consumption. Indeed, a survey of several hundred consumers revealed that only 1% of them fully understood all the different elements involved in determining payments.

Meanwhile, in the municipality of Esteban Echeverria, the IDB introduced information into the property tax bill to see what kind of messages might increase tax compliance.  The content of the messages was carefully drafted by conducting a survey of hundreds of taxpayers and a focus group. The focus groups highlighted the relevance of not only adding pictures to the messages but also correlating the pictures with the text, so that both text and images took  into account current local realities. When presented with a tax bill which showed a picture of a balance scale representing the justice system along with a text stating that paying taxes contributes to an equitable society, participants remarked that the text and image were inconsistent: the image of the balance scale contradicted the idea of a progressive tax system where taxes are higher for the wealthy. A message stating that by paying your taxes you contribute to safety in Esteban Echevarria also fell flat. Participants simply didn’t believe it. Indeed, 55% of taxpayers  said that crime actually worsened in the previous six months. Meanwhile, a message involving a football red card and a statement about punishments for non-compliance proved offensive. A poor and functionally-illiterate woman said that she felt guilty for not paying her taxes but couldn’t do anything about it as she had five children to feed.

These findings were very telling. Messages, the focus group suggested, had to be believable. Moreover, they had to be carefully synchronized with images so as not to introduce confusing inconsistencies, and they couldn’t hurt people’s feelings. Presentation also mattered. A decision by local authorities that the text be included in a small box, in small-type and without accompanying pictures largely doomed the effort that had been invested  in designing the messages. Only 17% of taxpayers  remembered any message at all in the tax bill and of course, those messages didn’t lead to any changes in behavior.

An IDB experiment on increasing tax compliance in the Municipality of Junín also yielded insights. The experiment divided taxpayers into four groups — three treatment groups and a control — and inserted messages revolving around the typical reasons people give in Latin America for not paying their taxes. These included deterrence (“If I don’t pay nothing happens”); equity or peer-effects (“Why should I pay if nobody else does?”); and fairness or reciprocity (“Why should I pay when the government misuses the money it collects?”). This time the messages had a significant effect.  The one on deterrence stated the penalties for tax avoidance and included a picture of a judge’s gavel. It generated the most impact on average. People in a control group that received no message had a higher probability of complying of around 5 percentage points, which would be equivalent to reducing tax evasion by more than 10% if extended to the overall population.

Revealingly, the reaction to the messages depended on people’s beliefs, which in turn, correlated with past payment behavior.  The message on fairness or reciprocity, for example, included a statement on how collected taxes had improved street lighting, sewerage connections and other municipal services. Those who received a lower quantity or quality of such services and might benefit from an improvement reacted positively. But the message had a negative effect on those who received better services. The deterrence message, meanwhile, had a positive impact on those taxpayers who had not  paid in the previous period but no statistically significant effect on those who did.

Beliefs clearly matter. So does the credibility of the messages, the simplicity and clarity of their presentation, and their consistency with accompanying images. Nudges can induce behavior change without altering prices or regulations. As a policy alternative, they can be effective.  But policy design and carefully thought-out messaging make all the difference. The devil is in the details.