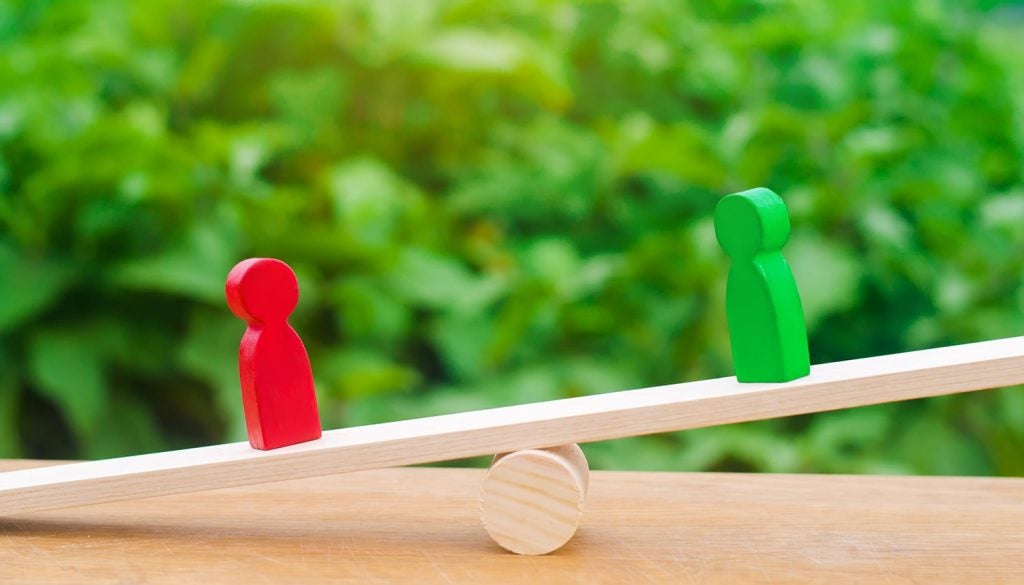 As Joana Silva and I document in a recent book, earnings inequality declined in 16 of the 17 countries in Latin America for which consistent statistics can be calculated, although the intensity and turning points diverged across countries. For example, after a decade of stagnant or slowly increasing inequality, the 90th/10th interquantile range of the labor earnings distribution declined by 20% in Argentina and 28% in Chile between 2000 and 2013. In Brazil, where earnings inequality started to fall as early as 1990, the reduction has been a remarkable 46% since 2000. Note, however, some important differences when we pay more attention to what happened at different points in the distribution of wages. While the most significant portion of the reduction in earnings inequality in Brazil was the result of a decline in the 50th/10th interquantile range (-31% since 2000), the reduction in inequality in Argentina was mostly driven by a fall of upper tail inequality (-23% fall of the 90/50 log earnings ratio since 2000). In Chile, inequality fell symmetrically at the lower and upper parts of the earnings distribution (-15% since 2000).

The premium for job education and experience declines, contributing to the inequality reduction

What are the drivers behind the trends in wage inequality in these three countries? Manuel Fernandez and I tackled this question in a paper that was published this month in the Journal of Development Economics. Our point of departure is that the trends in wage inequality are quite similar to those observed in the schooling premiums. For example, the fall in wage inequality in Argentina after 2002 was particularly strong at the upper-tail of the distribution, a pattern that was closely mimicked by a sharp decline in the college premium. In Brazil and Chile, where the fall of lower-tail inequality was more pronounced, high school premiums moved in synchrony with the interquantile log (50/10) earnings ratio.
The evolution of the experience premium has received comparatively much less attention in the literature that studies the determinants of wage dispersion in Latin America. However, it also declined during this period. The wage gap between workers with 20-29 years of experience and those with 0-9 years of experience declined in the three countries and for all education groups. In Argentina, the decline was sharper among college (a 23% reduction) and high school educated workers (-16%). In Brazil and Chile, the 20-29/0-9 experience wage gap among high school educated workers fell by a remarkable 37% and 30%, respectively.
How much did the decline of schooling and experience premium contribute to the inequality reduction? Using Oaxaca-Blinder decomposition methods across the distribution of wages, our paper confirms that the fall of the education premium was a key determinant of declining inequality. It also shows that the reduction of the experience premium was a quantitatively important driver. In Argentina and Brazil, we report that the impact of the fall of the returns to experience on upper-tail inequality was even stronger than the effect of the decline of schooling premiums.

How important was labor supply in the fall of the experience and education premiums?

The core of the paper concentrates in understanding the role of changes in the composition of the workforce in shaping the declining wage inequality. The shares of highly educated and older workers increased substantially.  Supply/demand forces would suggest that as well-educated and older workers become more abundant, the premiums to both education and experience tend to fall. The four panels of the figure below show evidence of the negative co-movement between changes in log wages and log labor supply across education/experience groups. 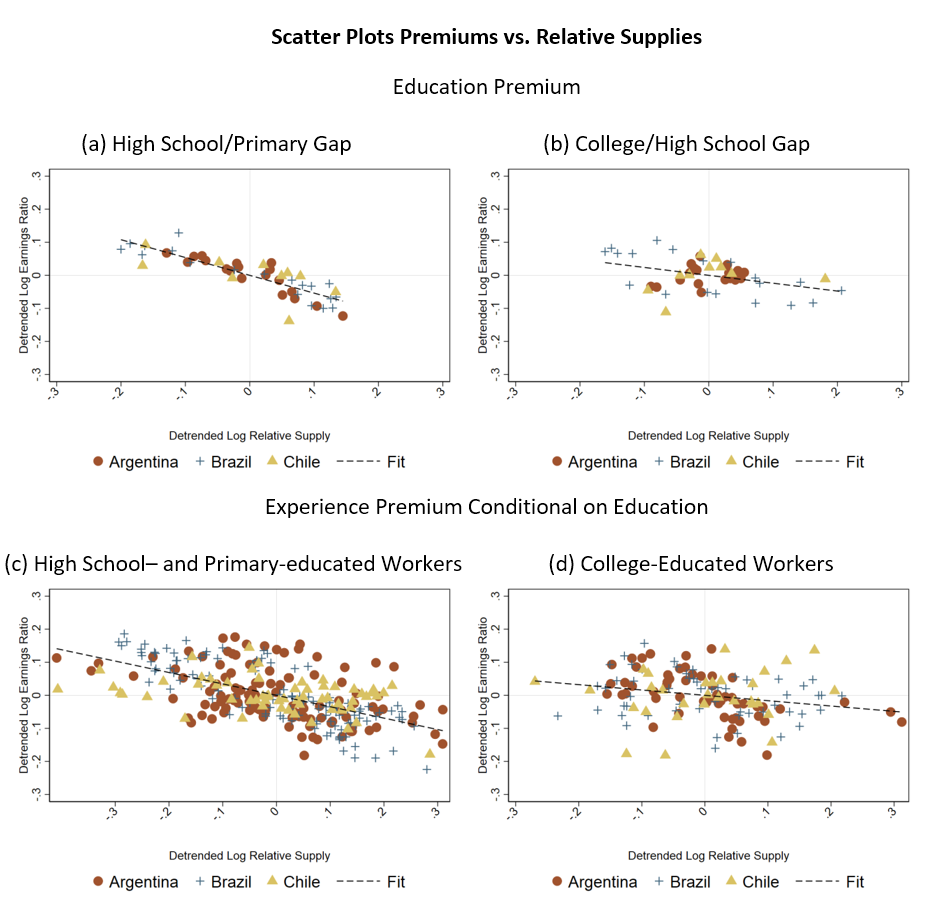 How strong were labor supply forces in the determination of the decline in the premiums? To answer this question we develop and estimate an extension of the canonical labor supply and demand model popularized by Katz and Murphy. In the model, not all workers are equally productive, and production requires a combination of each type of skill. More formally, workers are imperfect substitutes, and using relative wage and labour supply data across skill groups we can estimate their elasticity of substitution in production.
We find evidence that workers with different levels of schooling are imperfect substitutes in production. Moreover, we find that conditional on the education level, workers of different age groups are also imperfect substitutes in production. In our preferred specification, we report estimates of the elasticities of substitution in a range from 1.25 (between skilled and unskilled workers) and 5.5 (between different experience groups conditional on having a college education). The immediate implication of this result is that the increase in the supply of more educated and older worker did in fact put strong downward pressure on their relative wages.
Was it all supply? Not really. Our estimates show that the secular aging of the population explains about half of the decline in the experience premium among unskilled workers, and about a third of the reduction among college graduates. The rapid increase of high school graduation over-predicts the decline of the high-school premium in Argentina and Chile, because it misses a mild upward trend during the 1990s. Meanwhile, labor supply trends pushed the college premium down during the 2000s, but not enough to explain the full fall, at least in Argentina and Chile. A possible interpretation of the latter finding is that the relative demand for college workers declined during the 2000s, possibly fuelled by the commodity boom and demand shifts favouring low-skilled workers. An alternative is that the expansion of college enrolment has brought about a decline of the average quality of a college graduate, and the decline of the premium simply reflects the human capital content of the college degree. This is an area of active research. We should expect more news in the years to come.