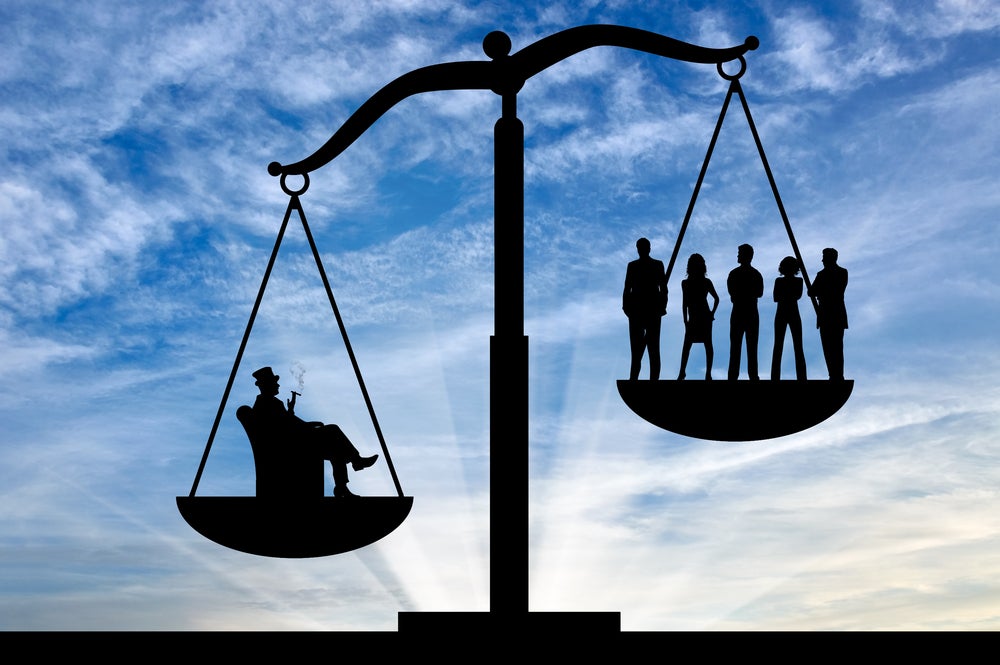 In the early 1800s, the Prussian scientist and explorer Alexander von Humboldt wandered the streets of Latin America and wrote of his astonishment at the misery and wealth; the “nakedness” and the “luxury”, the “immense inequality of fortune.” Today, that image of inequality endures. The region, along with Sub-Saharan Africa, is the most unequal in the world.

But things are unquestionably changing. Since the early years of the new millennium, inequality has fallen significantly in virtually every country of Latin America and continues to drop. The trend characterized by higher levels of education and rising wages, especially for unskilled workers, has benefitted millions of people.

Drops in wage inequality were key

How did this happy change in circumstances occur? Joana Silva of the World Bank and I tell that story in a book entitled “Wage Inequality in Latin America,” which will be launched tomorrow, Nov. 14,  at the Wilson Center in Washington, D.C. We find, as our title suggests, that reductions in wage inequalities—rather than those in capital or rents—were key to the big push forward. In the new millennium wage inequality fell significantly throughout Latin America (in 16 out of the 17 countries studied). And these trends stand in stark contrast to the rest of the world where most countries struggle with constant or rising inequality (Figure 1). 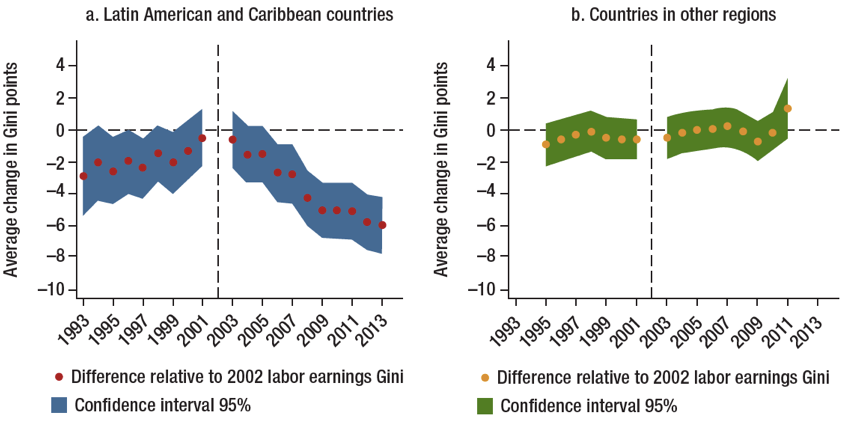 Wage inequality declines when wage differences across workers narrow. In the book we report that wage differences declined both between workers of the same skill level (i.e. education and labor market experience) who worked in different firms and between high- and low-skilled workers. More than half of the inequality reduction occurred across workers with the same level of skills. The remaining 48% was due to a decline in the wage gaps between low- and high-skilled workers.

Crucial factors lie in labor market developments that coincide at least in South America with the economic boom in commodities of the 2000s. Growth during this period was a key driver of the inequality reduction. As money poured into countries and local currencies appreciated, individuals, businesses and governments went on a spending spree, splurging in non-tradable sectors like construction and services and boosting demand for low-skilled laborers. At the same time, in non-tradable sectors wages of workers of the same skill level are more similar across firms.

In the tradable sector, meanwhile, the currency appreciation was reducing inequality through a different channel. It hurt highly-productive manufacturers oriented to the international market which paid significantly higher salaries than less productive ones that produced for the domestic market. This also contributed to less wage inequality across firms among workers with similar skills.

The role of education in reducing inequality

In education, transformations were immense. Government assistance, like conditional cash transfers programs, among other factors, vastly increased the numbers of people accessing high school in Latin America. Millions were going to college for the first time. This was of huge benefit to the region. But it also meant that a high school or college degree was not as rare as before and the wage premium for those degrees was no longer as high.

The remarkable expansion of access to education was a second key driver of the reduction in inequality: the well-educated no longer commanded such disproportionally large incomes as before; and low-skilled workers, reduced in number, made more than in the past. Add to this the fact that the wage premium to experience for well-educated older workers was also declining, perhaps because of technological changes to which they could not adapt, and you see a fairly complete picture.

Of course, these were are not the only factors. Levels of informality also fell during the 2000s. Firms hired more low-skilled laborers and enforcement improved, giving workers greater bargaining power when it came to benefits and wages. New laws dramatically boosted minimum wages in several countries, including Brazil and Argentina.

But these factors are secondary. Indeed, a key message of our book is to emphasize that the main forces behind inequality reduction were related to the particular type of growth experimented, especially in South America, and the rising levels of education regionwide. These were more important than redistributive mechanisms, like conditional cash transfers and hikes in minimum wages.

Minimum wages hikes can sometimes be a mistake

That is crucial when we consider how to continue the progress made after the mid-2011 slowdown in growth. Policymakers may be tempted, for example, to increase minimum wages further. But minimum wages played no role in Peru’s dramatic reduction in inequality and only about 20% of the drop in Brazil during the boom. They can help in an era of high growth. During those times, they can be another tool to ensure that the poor are not left behind. But they are not the whole story, and at times, are a big mistake. Brazil endured low growth from 1995-2003. Rather than reducing inequality, minimum wage hikes during that period boosted it because companies couldn’t afford to employ people at the elevated salaries and many workers ended up in informal, low-paying jobs or earning less than the minimum wage.

The high rates of growth enjoyed in the 2000s aren’t likely to come back anytime soon. Inequality, while continuing to decrease, is falling at a slower pace. But if we can’t count on a boom, we can lean on the second pillar of inequality reduction: education. This will be critical in preparing for that inevitable time, already faced by developed economies, in which robots and other machines do much of the work of people in the middle of the skills distribution, replacing workers from factories, service clerk jobs and other areas of the economy.

The challenges are great. Young adults need a push into the labor market. Older adults, with high levels of experience, but not necessarily the right skills, need to be retrained. As emphasized by the recent IDB flagship report,  Learning Better: Public Policy for Skills Development, that calls for programs like apprenticeships, which are still underdeveloped in Latin America and the Caribbean but have had remarkable success in countries like Germany, Austria and Switzerland. These, co-financed by the government and private sector, can be excellent ways to help people develop technical skills over a year or more while earning a salary. Other modalities, including shorter-term internships, may similarly assist those who have fallen behind. And we need to shift the focus in schooling from access to quality, in particular among those public schools frequented by the poor. Yes, we are in a slowdown. But we needn’t be passive observers. We should celebrate the recent, large declines in inequality and take measures to ensure the progress continues.