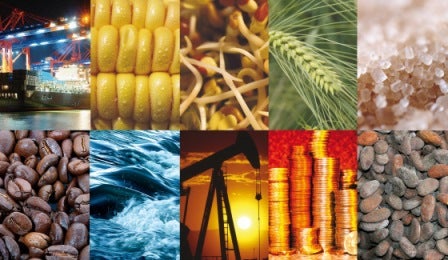 Commodity prices are very persistent. During booms we seem to forget that they have always (yes, always) been followed by busts (see Figure 1).  And during a slump we forget that a boom is surely going to come along— we just have to wait long enough. What determines such booms and busts?  Was the last boom exceptional? Where are prices today relative to long-run trends? And the big question: where are prices likely to go from here?

Before seeking more complicated stories, three basic aspects of commodity theory should not be overlooked. First, commodities can be stored, implying a trader can buy today and pay the costs (of financing that purchase and storage) and sell in the future. If traders are convinced China’s growth will rise in six months, boosting demand and the price of copper at that time, the price will rise today.  As China demands virtually every commodity, all prices will increase. Or, if a new chance arises that hostilities in the Middle East may disrupt oil next year, oil prices will shoot up today, and then if through some hasty diplomacy the problem is solved, prices will fall— all without a single shot being fired. Forward looking commodity prices respond to the probabilities of future supply/demand events. Demand shocks may provoke high correlations across commodities; supply shocks tend to be more commodity-specific.

BUT—and it’s a pretty big but—sometimes a sharp increase in demand or a big disruption to supply may exhaust all current availability: known as a stock-out.  This is rare but if it happens, the current (or spot) price will rocket up in spectacular fashion.  Interestingly, the price expected in 24 months revealed by longer term futures contracts may not move much at all.  The relationship between the total availability of a commodity and the spot price is not straightforward.  As availability declines, before reaching the extreme of a stock-out, prices will rise faster and faster. The second aspect is that prices can be very “non-linear,” meaning that they can increase a great deal as stocks decline.  This is evident even in aggregate price indices such as that plotted in Figure 1.

High prices stimulate investment. But economists still don’t have a completely satisfactory model for commodity prices with all the necessary elements, including how stockholding is determined and how investment decisions are made, especially taking into account that investment takes time, may have a large minimum size (so can be lumpy) and that is generally sunk, meaning that once the investment is made, it cannot be redirected to other uses. Discussion has raged from early models that generate price cycles (sometimes known as hog-cycles) as expectations were assumed to only slowly adapt, through and beyond the so-called “rational expectations revolution.”  The problem is related to the more general one of sunk investment that may generate business cycles but with the potential of stock-outs, rational inventory holding and the existence of financial markets with forward looking prices. Whatever the micro-foundations, a third aspect is that commodities do seem susceptible to price and investment booms, followed by crashes, then supply slowly re-adjusts.

A “real” view of the recent boom would be that strong global growth (until the global crisis) and especially high demand from China pushed stocks low and prices high. China grew at an average rate of 10.5% for 10 years (2002-12) creating a new economy the size of today’s Sweden or Argentina every year. But supply eventually caught up: more land came under agricultural cultivation and yields rose, new mining projects boosted metal production and new ways were developed to extract oil, not just from shale but also thanks to innovations in horizontal drilling that allow much greater production from conventional wells.

Others attribute the recent boom to financial developments: global monetary policy, low interest rates, a financial bubble and/or large dedicated commodity funds. Financial factors have surely also played a role. But it’s fiendishly hard to distinguish these and the real view when properly taking into account the basic aspects of commodity theory.

Where are prices likely to go now? The IDB’s 2012 Latin American and Caribbean Macroeconomic Report argued that Chinese growth rates would wane and as they did, commodity prices would fall, presenting a significant risk for Latin American and other exporters. Mariscal and Powell (2014) argued that further declines were consistent with a return to a previously established equilibrium in real prices. The recently released 2015 Latin American and Caribbean Macroeconomic Report, based on underlying work by Ahumada et al (forthcoming), presents estimates from error-correction, time-series models for soya, wheat, corn, copper and oil, that combine short and longer-run factors, including supply and demand as well as financial variables,  remaining agnostic on underlying theories. These analyses (and most other forecasts) suggest that failing unanticipated developments, lower commodity prices are here to stay for a while with no sharp rebound expected (although there might be some pick up for oil) but with confidence limits that suggest considerable uncertainty.

Indeed, the very high uncertainty in any commodity price projection, including those extracted from futures prices, underlines the need for commodity exporting countries (and some importers) to find ways to manage these risks. These mechanisms may include hedging, especially of annual budget commitments (as Mexico has done recently), and the use of stabilization funds (for example, in Chile).

Perhaps most worrisome for commodity exporters is the prospect that prices may fall below the previously established equilibrium in real prices. Suppose long-term prices with normal levels of stockholding are determined by an underlying long-run cost curve then, if high prices driven by sharper than expected changes in demand stimulate significant innovation, temporary booms will lower that curve. When the reasons for the boom subside, prices may fall below the previously established equilibrium.  The two largest previous commodity booms in the past 115 years (in 1920 and in the early 1970s) both ended with crashes that lowered real prices relative to the previously established equilibrium (See Figure 1, again). The recent boom has been exceptional both in terms of its size and duration; only time will reveal the full impacts of supply innovations on long-run commodity prices, but if history is any guide, they may lower real commodity prices even further.  And we may have to wait many years for the next boom to come along.

Principal Advisor of the Research Department at the Inter-American Development Bank.  All views expressed are strictly my own. Acknowledgements:  I would particularly like to thank Ron Anderson (LSE) and Chris Gilbert (now Johns Hopkins, Bologna) who taught me so much about commodity markets and David Hendry (Oxford) who taught me more than I could absorb regarding time-series econometrics. I would also like to thank my co-authors Hildegart  Ahumada and Magdalena Cornejo from the Universidad Torcuato di Tella, Buenos Aires and Rodrigo Mariscal, now at the IMF.  All mistakes remain my own.

A version of this blog was previously published by VoxEU.org