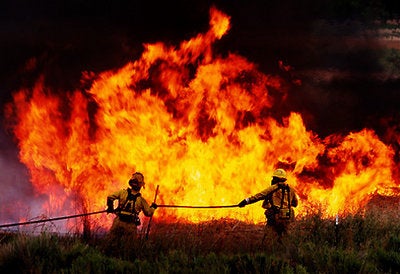 The region’s oil exporters are enjoying a mild reprieve from devastatingly low prices. For now.

While the price uptick may have several causes, the most dramatic contributing factor is the Fort McMurray fire in the Canadian province of Alberta. The wildfire covers an area larger than some of the world’s major cities, and officials have estimated it will take weeks or even months to extinguish. In the meantime, more than 80,000 people have been evacuated and companies have suspended their operations in the area’s oil sands fields. This means that oil production of approximately a million barrels per day will not go to refineries, thus remaining off the market for some time.

But the blaze will eventually be put out. At some point weather will become less favorable to combustion, forest fuel loads will be depleted, and firefighters’ efforts will succeed. Production from the oil sands will resume and add to the global supply, with a dampening effect on prices.

No matter how long it takes Alberta’s production to recover, other developments are likely to have greater impact. Particularly notable is that multi-nation talks in Doha on limiting production and supporting prices recently broke down. This reportedly occurred because of differences between Saudi Arabia and Iran, major producers which also happen to be intense geopolitical rivals. They should not be expected to find common ground on oil production, among other issues, for some time to come.

Even as supplies remain abundant, other factors threaten to soften long-term demand. Technological changes, for example, have increased the energy efficiency of vehicles and other machinery. Moreover, if countries pursue the goals set by last year’s Paris Agreement on climate change, energy consumption will shift to sources with fewer greenhouse gas emissions than petroleum.

But good news on a planetary level may prove bad news indeed for governments that depend on oil for public revenues and base their macroeconomic planning on petroleum sales. Countries’ experience with booms and busts in the region and around the world provide ample evidence on the problems that can arise.

Oil-producing countries in Latin America and the Caribbean are not the only ones that should be concerned. The slowing of Chinese growth and the end of the global commodities boom have likewise led to lower prices for agricultural goods such as corn and soybeans. In addition to currently low prices, the regions’ exports of metals face an additional long-term challenge. Unlike fuels or foods, metals can be recycled, and slower-growing countries could come to increase their use of scrap metal and decrease their reliance on additional imports.

If current conditions have a bright side, it is that countries can return to the fundamentals of development now that the distractions of the commodity boom have faded. Policy prescriptions will vary from one country to the next, but the underlying goals will be constant: diversifying economies, buffering the effects of fluctuations in commodity and other macroeconomic conditions, and maintaining fiscal stability without sacrificing the pursuit of social policy objectives.