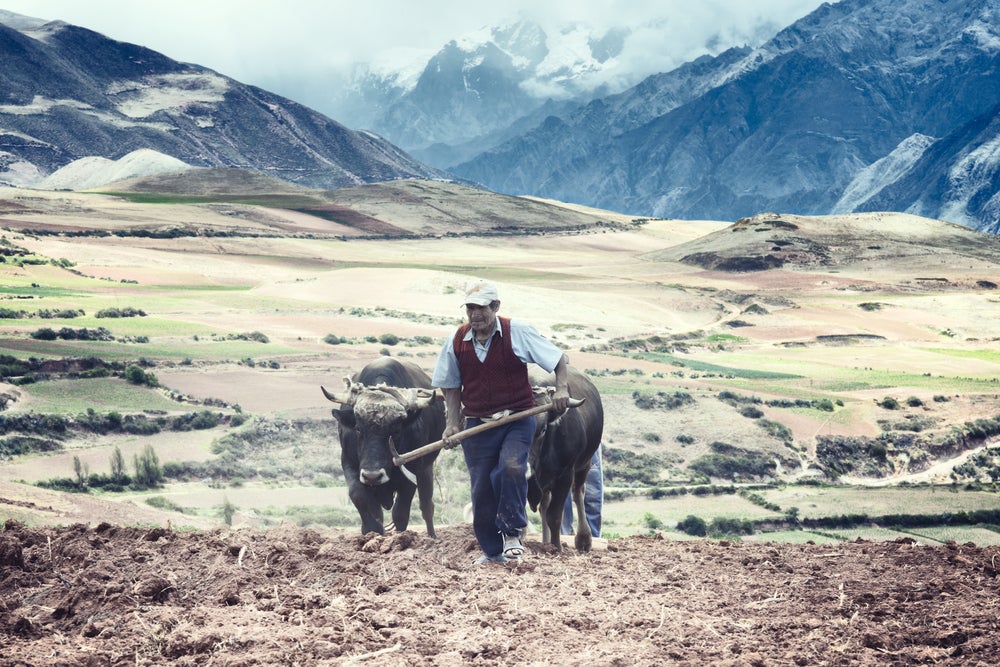 During a recent visit to the IDB, Juan Pablo Rud of Royal Holloway, University of London presented research conducted with Fernando Aragón, and Francisco Oteiza examining how farmers adapt and change their agricultural practices in response to climate change. The study may be one of the first to examine adaptation to climate shocks in the developing world and demonstrates how small-scale household farms can respond to extreme weather events in the short run. These responses, in turn, may exacerbate, as opposed to alleviate, climate change impacts in the long run.

The authors use a micro-dataset of 55,000 Peruvian farming households from 2007 to 2015, geo-matched with high-frequency temperature data from satellite imagery. This allows the authors to compare the behavior of farmers experiencing differing frequencies of high temperatures.

The average farmer in the dataset generally holds around 1 hectare (4 acres) of land, and uses basic technologies, like hand-held or animal-drawn plows. Their small-scale production of maize, potatoes, fruits and grains, is enough to keep their families afloat in good times. But when faced with a significant number of high temperature days during the growing season, they must adapt. Households that own livestock sell their livestock. Households that don’t own livestock adapt to the higher temperatures by expanding their farming operations to fallow land, with an associated increase in child labor.

This has potentially serious ramifications. Farmers traditionally keep a significant portion of their land fallow in order to break disease cycles, replenish soil nutrients, and reduce erosion. Putting fallow land prematurely into production pays immediate expenses and puts food on the table. In the long-term, however, it may lead to lower returns. This is an example of adaptive behavior that can work in the short run but may intensify the costs of climate change.

What else can the farmers do? There are generally no alternative sources of employment in their isolated communities. No social network for financial support exists: every member of their community is also a farmer and in a similar situation. And there is no crop insurance to buffer the bad years.

The benefits of crop insurance

Crop insurance is a potential solution, both in Peru and in other countries affected by extreme heat. Virtually non-existent in the developing world today, it could ease farmers’ need to prioritize their land’s short-term output over its long-term productivity, highlighting the potential for policies that index insurance to the number of high temperature days farmers face in a growing season.

To date, earth surface temperatures have increased around 0.85 degrees Celsius on average since the mid-19th century. Using a very conservative scenario by the United Nations Intergovernmental Panel on Climate Change (IPCC) of temperatures warming to 1.5 degrees Celsius later this century and their own models, Rud, Aragón, and Oteiza estimate that productivity would drop 9% on the hot, dry coast of Peru. In the highlands where temperatures are cooler a warmer climate would increase yields by 0.05%. Under a worse “business as usual” scenario of temperature rises of 3 degrees Celsius compared to the 1990-2000 period in Peru, they calculate that the highlands would experience a similarly, small boost in productivity; the coast would experience a 22% decline. While short term adaptation in land use would reduce the observed effects on agricultural output, a question mark remains on whether this strategy could be sustained in the long run.

That may indicate the need for long-term planning and government intervention, including crop insurance, to ensure future wellbeing and food security in rural areas. And not only in Peru. It would also hold true in other Andean regions of Colombia, Ecuador, and Bolivia, as well as other parts of the developing world, where small producers will be faced with the growing challenges of climate change and adaptation.