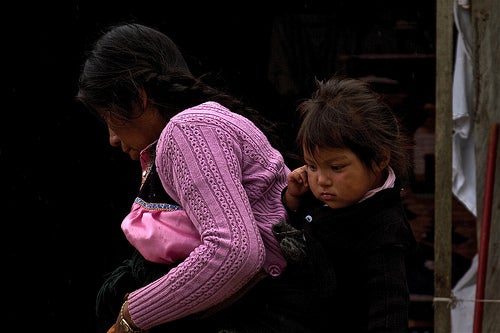 In May of this year, in honor of Mother’s Day, Save the Children published its 13th annual report on the “State of the World’s Mothers.” This year, the organization chose to focus on nutrition in the first 1,000 days of a child’s life—from pregnancy until age two. This is the period where crucial cognitive capacity is developed and healthy physical growth is established. Successful development during this period has effects on children throughout their lives, improving school performance, resilience to disease, and future earnings.

However, 27% of the world’s children are stunted by poor nutrition in the earliest months of life. The Latin American and Caribbean countries with stunting rates over 20% are Belize, El Salvador, Nicaragua, Haiti, Ecuador, Peru and Bolivia, with 20-29%; Honduras, with 30-39%; and Guatemala, with over 40% of children stunted. In developing countries in general, the losses in GDP caused by malnutrition can be as large as 2-3% annually.

The economic inequality that is characteristic of the region also contributes to significant disparities between the nutrition of the rich and the poor. In Guatemala, Nicaragua and Honduras, the children of the poorest quintile are six to eight times more likely to be underweight than the children of the wealthiest quintile. This difference is even more startling in El Salvador, where the poorest children are 13 times more likely to be underweight than the richest children. In Peru, 13% of children are chronically malnourished in urban areas, while 47% of children are in rural areas (Encuesta Nacional de Demografía y Salud Familiar (ENDES) 2004-2008).

The health of mothers  is also poor. 25% of women in the region are anemic. Although this is lower than the average in the developing world, 40% of women, it is still significant. Many women are also stunted, or shorter than 145 cm (4’7”), usually because of poor nutrition during childhood or adolescence. Stunted women face higher risks of complications during childbirth and of having small babies. In Peru and Bolivia, more than 10% of women aged 15-49 are stunted. Most alarming, 29% of women are stunted in Guatemala.

The report ranks countries on three scales, and offers policy recommendations. The Infant and Toddler Scorecard measures the nutrition of children under age two in 73 of the 75 priority countries of the Countdown to 2015, which account for more than 95% of all maternal, newborn, and child deaths. Haiti, Guatemala, Bolivia, Peru, and Brazil are the priority countries within LAC. Peru implemented the Programa Integral de Nutrición in 2006, and sponsors events to promote breastfeeding, such as an annual competition in the duration of nursing in one sitting. Through these efforts, Peru is improving in terms of the percentage of children under age two fed according to recommended standards.

The Breastfeeding Policy Scorecard ranks industrialized countries according to their policies towards breastfeeding mothers, and finds that the U.S. is least supportive.

Finally, the Mothers’ Index finds that women and children in Norway have the best health, education, and economic status, while those in Niger have the worst. Of the 85 countries the report categorizes as “Less Developed;” Cuba, Barbados, Argentina, Uruguay and the Bahamas are within the ten highest scoring countries in the Mothers’ Index. Guatemala and Honduras rank within the 20 lowest scores in the Mother’s Index of the Less Developed Countries.

The six key nutrition solutions to save lives outlined in this report are:

These solutions are affordable even in the poorest countries. All six can be provided for the first 1,000 days for only US$20 per child. Of the six solutions, breastfeeding is particularly emphasized. Breastfed children in developing countries are at least six times more likely to survive their early months than non-breastfed children.

The recommendations outlined in the report are to invest in the six solutions, increase access to health workers, help more girls get to school and stay in school, focus more government resources on early childhood nutrition, and improve policies that support families and breastfeeding mothers. Community health workers are particularly important for providing access to health services in rural areas; Brazil’s community health worker program is having success. These local health workers serve 63% of the population in Brazil, making home visits to monitor health and implement basic interventions. Finally, political will and effective strategies, and not just economic growth, are necessary to reduce early childhood malnutrition.

Sophie Gardiner is a senior at Middlebury College studying International Politics and Economics. At present, she is a summer intern at IDB’s Social Protection and Health Division..