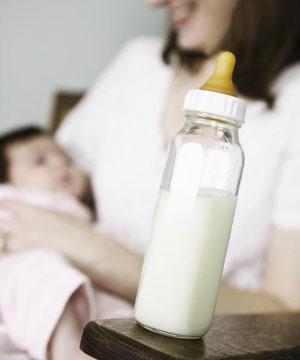 “Each month that a baby breastfeeds reduces his risk of obesity by 4%.” That was the conclusion of the presentation on nutrition and infant growth that I attended a few weeks ago at an international conference on nutrition and growth. Yet upon exiting the conference room, we were greeted by an image of a happy, healthy child advertising one of the many infant formulas manufactured by one of the event’s sponsors, directly contradicting the statistics that had just been presented.

Recent studies on animals have reported the existence of a type of “nutritional programming” in the first months of an infant’s life that affects the child’s health years later. Delayed growth in utero or during the first few years of life has been associated with greater prevalence of obesity, overweight, diabetes, and hypertension.

Surprisingly, accelerated growth in the first few months of life has also been associated with increased prevalence of these chronic diseases. In fact, accelerated and delayed growth in the first few months of life have the same adverse effects on future health, and formula feeding during that period puts a child at risk of both. Formula-fed babies are at higher risk of poor growth due to their increased exposure to infections. They are also at risk of accelerated growth. They are often fatter than breastfed babies due to the high levels of protein present in formulas, which they cannot metabolize effectively at such a young age.

Promoting breastfeeding is a part of most interventions that aim to improve the nutritional and health status of people in our region. These interventions generally promote behavioral changes among mothers, and encourage exclusive breastfeeding in the first six months of life. Although it’s true that mothers are ultimately responsible for feeding their babies in those first few months, it’s important to invest in such strategies. Still, I wonder what is society’s responsibility in this process? What structural changes does society need to make, and which investments are needed, to make it possible for mothers to breastfeed their babies in the first months of life? And thus, to prevent diseases that impair quality of life so drastically for such a large percentage of the population, and at such great social and economic costs to our countries?

In our Region, the truth is that breastfeeding is anything but easy for many mothers. What makes me say that? Well, consider that in Panama, the law governing breast milk substitutes has no provisions to enable its implementation in practice. Or how in Nicaragua, working mothers actually have a legal right to get a supply of infant formula after giving birth. And of course, there’s no place to pump breast milk at most work places. Not to mention that  breastfeeding in public is considered inappropriate in most countries.

So, what kind of message is really being conveyed when just outside a conference on infant feeding, there’s a huge display advertising the latest generation of infant formulas (which, thanks to the new addition of five trace elements, is “almost” like breast milk! Never mind that breast milk has more than 300!)? It’s time to clarify our message. It’s our responsibility as a society (not just that of mothers) to take the first steps toward making breastfeeding a clear, important public health intervention.

Ana Perez Exposito is senior technical officer at the Mesoamerican Health Initiative 2015 (SM2015), implemented by the IDB in the eight countries in Mesoamerica (Mexico, Guatemala, Belize, El Salvador, Honduras, Nicaragua, Costa Rica and Panama). Her work includes among others, technical assistance in the areas of maternal and child health and nutrition at national and regional levels.