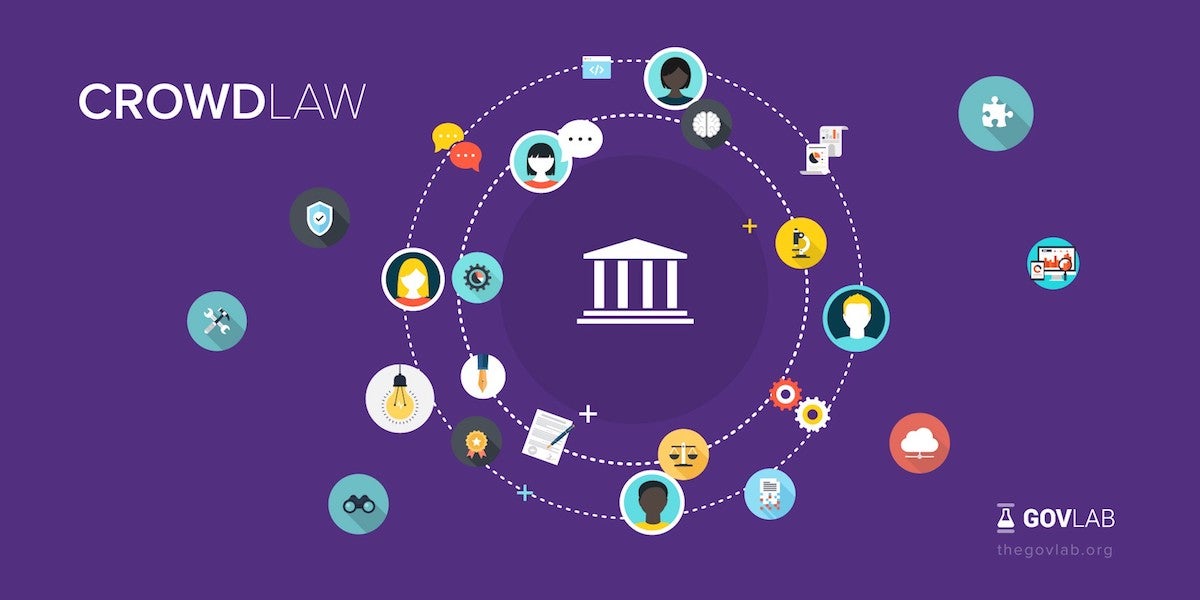 [message_box title=”” color=”blue”] This is Part I of a two-part series by The Governance Lab at New York University’s Tandon School of Engineering, based on two articles on how to promote public participation in lawmaking: “Congress Is Broken; CrowdLaw Could Help Fix It,” which appeared in Forbes January 23, 2018 and “10 Recommendations for Designing Better CrowdLaw Initiatives,” published by the GovLab on the CrowdLaw Blog in October 2017. [/message_box]

In Peñalolén, Chile, the Mayor’s office, working together with Fundación Ciudadano Inteligente, is asking citizens not simply to suggest better ideas for how to use a municipal park, but to collaborate in designing and then evaluating the implementation. This project, called Abre or open, is akin to similar efforts to engage the collective intelligence of people in the process of making laws and policies that are happening right now, around the world. Already, there are over two dozen examples of local legislatures and national parliaments turning to the crowd to improve the legitimacy and effectiveness of the laws they make. What is taking place via the Mayor’s office in Peñalolén, Chile, and across other parts of Latin America, might soon be the rule and not the exception. Technology offers the promise of improving both the quality and accountability of lawmaking by opening the process to more and more diverse expertise and input from the public at every stage of the legislative process. We call such open and participatory lawmaking: “CrowdLaw.”

This two-part blog series offers recommendations on ways to implement four critical steps for designing a CrowdLaw initiative. In this post, we focus on: (1) optimizing for institutional needs, (2) designing for the needed information or expetise, (3) staffing to make participation usable, and (4) designing for use.

1 Optimize for institutional as well as public engagement

CrowdLaw designers concentrate on making public input easy for individuals. But to be successful, any process also needs to make input useful to institutions. Therefore, consider the needs of the government and public servants and create platforms and processes that account for obligatory and acculturated processes and staff capabilities. This principle does not rule out changes to legal procedures or the hiring of staff with relevant skills to enable public participation, but there must be a workflow that makes the inputs from participation usable. For example, of the 2 million petitions submitted on the White House’s We the People e-petition platform, not one can be directly tied to a government action, arguably because a petition with no supporting documentation creates, rather than alleviates, work for public officials. Such a platform does not create an established process for channeling the right information to the right policymakers.[1]

2 Design to achieve the desired goal

Public engagement has the potential to foster democratic legitimacy, build social cohesion, increase government accountability, and improve the quality of legislation. An engagement process that asks people how they feel about a draft bill accomplishes a different purpose from a process that asks them, for example, to supply data to inform the crafting of the bill, or that invites them to use cellphones to monitor its implementation. The choice of goal will dictate what constitutes a successful system and the information or action that is sought from the public. Thus, if the goal is to obtain implementable proposals, do not ask merely for ideas. Ask for ideas supported by evidence. In the case of Peer to Patent, an initiative launched by an administrative agency not the legislative branch, the United States Patent Office asked participants to supply information that would help a patent examiner determine whether an invention met the criteria for a patent. They did not, however, ask for people’s opinion about the patent, since that would have been legally irrelevant to the decision-making process.

3 Identify who will manage the process

One finding that consistently emerged from our analysis of global cases was that moderating the discussion during engagement is crucially important. Poor moderation can quickly derail the process and leave participants confused and frustrated. Although peer-to-peer community moderation can help to distribute the work by inviting the public to moderate one another, such as by upvoting, downvoting and flagging contributions as spam or abusive. The plan must also include a professional team to respond and explain how input will be used. This is an important part of the bridge connecting the public and government participants. For instance, LabHacker/E-Democracia in Brazil uses 200 volunteer legislative consultants to serve as “technical translators” between citizens and representatives and help to ensure that input meets legal requirements.[2] Similarly, the process on Parlement & Citoyens is facilitated by volunteers. The same directive applies to offline engagement: citizen assemblies coordinated by Ireland’s We the Citizens ran successful regional meetings largely because of the role of skilled moderators.

4 Plan for use, not only solicitation

Public engagement without an institutional  mechanism for taking outside contributions onboard and integrating them is frustrating for all involved. By analogy, government can open and publish its public procurement data, but such transparency does not in itself reduce corruption. Rather, public institutions must learn how to use such data to change how they buy goods and services. Similarly, capacity must be built within legislatures to curate and use public input. This might require changes to the current processes by which legislation is proposed, drafted, negotiated, and implemented. As important as soliciting public input is, there must be a corresponding learning mechanism for redesigning how the parliament operates to make beneficial use of engagement.

In sum, these recommendations, relevant to all phases of the legislative process, summarize our key learnings about how best to design initiatives such that CrowdLaw enhances the legitimacy and effectiveness of lawmaking. They are also a blueprint, and place to start.

Read more examples of CrowdLaw, including Decide Madrid and Vota Inteligente, two projects which seek to include and empower citizens in the lawmaking process via participatory platforms.

By Prof. Beth Simone Noveck, Director of The Governance Lab at the NYU Tandon School of Engineering. Parts of this article were originally published in Forbes magazine and by The Governance Lab. They have been republished with permission. Visit Crowd.Law for more about the GovLab´s work on this topic.