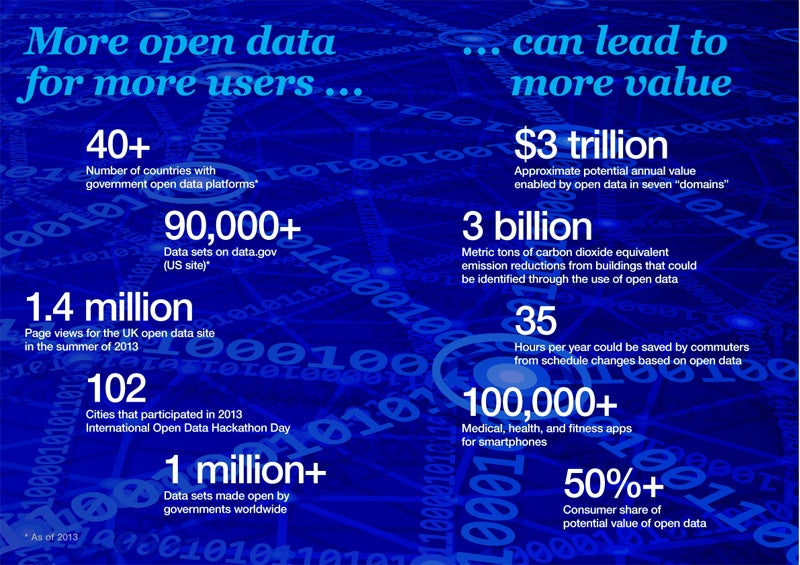 Following our recent research “Open data: Unlocking innovation and performance with liquid information”, we estimate that open data can generate a global economic impact of more than $3 trillion per year as a result of applications in five areas: education, transportation, consumer products, electricity and oil and gas.

When talking about open data we don’t just mean the opening of datasets owned or developed by government, but also the free sharing of data across industries to promote best practice, for example by sharing data about the performance of factory machinery.  Here are the main conclusions from our report on understanding how open data can help the development of Latin America.

Four nations in the region—Ecuador, Brazil, Mexico and Costa Rica—were among the 70 nations ranked for the openness of their data by the Open Knowledge Foundation. A World Bank-sponsored project, called Opendata Latinoamérica, which was modeled on a similar program in Africa, is attempting to consolidate open data sets from across the region and train journalists and citizens in how to use them.

The Brazilian state of Minas Gerais, working with the MIT Media Lab, has developed DataViva, a website that allows citizens to visualize all sorts of economic data, including pay levels and job openings for different kind of workers. By 2013, 25 agencies had opened 83 datasets to allow investors to see what types of exports come from the state and also to track deforestation and illegal cattle ranching in the Amazon rainforest.

In our analysis we found that it is often citizens and consumers that have the most to gain from open data. Looking at other cases around the world, there is an education portal in Tanzania that allows people to see real time results across the country. Thanks to these tools, educators can understand the educational quality and how to improve student performance, and train new workers with stronger skills who can command higher salaries.

In transportation, open data can help reveal where new roads and other infrastructure will be needed and provide information to make existing systems run more smoothly. In Lima’s open data portal, you can find information on existing bikeways, and in other cities, such as Mexico City and Caracas, smartphone apps have been created that let the public know when buses and trains are actually arriving so commuters can avoid delays.

In consumer markets, open data, such as information provided by online shopping portals that scan the prices of items at many online and offline stores, provide an unprecedented level of transparency, helping consumers get greater value for their spending.

In business operations, consumer product companies and retailers can combine open demographic data with their proprietary data in order to understand how their own products are selling and finely segment markets and target products and offers to very specific customer groups, as the Colombian company Senseta does. For example, one retailer uses open data to customize the selection available in individual stores based on neighborhood demographics. Similarly, a major grocery chain scans weather data to fine-tune inventories of prepared foods according to the forecast.

In many industries, companies can benefit by sharing “anonymized” data about their operations in order to expose variations with a view to improving performance. For example, the cost of developing a new oil or gas field can vary enormously because some companies wind up spending far more on processes such as construction. We estimate that if producers were willing to pool data (not a given at this point), they could save up to $230 billion a year in development costs if they used the data to achieve the same performance as the best-in-class company. They could also gain a far better understanding of the geology across an entire basin.

One of the most exciting developments that has emerged from open data is a flurry of entrepreneurial activity. In areas as diverse as transportation, agriculture, real estate, tourism and health care, startups and entrepreneurial companies are finding ways to make new services out of open data.

For example, Opower, a US-based startup uses government data on energy use, weather, and appliances to help consumers create personalized energy savings plans. The recent acquisition of Climate Corp., a company that collects government data on soil conditions, crop yields, and weather to provide customized crop insurance, for close to US$1 billion shows the potential value of such initiatives. To stimulate new ventures, cities and governments around the world have been sponsoring “datapaloozas” that bring together entrepreneurs, government experts and investors to share ideas.  Ayni, a startup based in Santiago, Chile, has created an app for smartphones that uses open data to tell consumers how much toxic material is present in the electronic products they have in their homes and shows them sites where old computers and other products can be recycled safely.

As momentum builds behind open-data efforts and more Latin American economies recognize the potential advantages, we anticipate that open data will generate considerable value in the region. Open data can help Latin America manage development efforts, track and reduce corruption, and generate new businesses and employment opportunities. For example, IADB has launched the MapAmericas platform to track and visualize the results of development projects in Latin America. As more data sets open up, the possibilities look set to multiply.

How do you see Open Data evolving in Latin America?