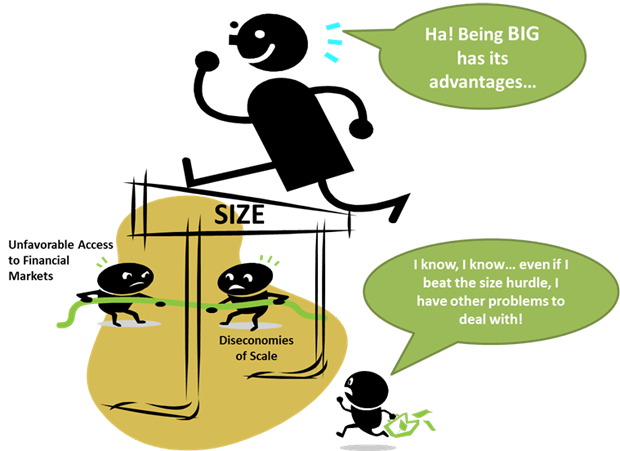 Recent research presented in Is There a Caribbean Sclerosis? Stagnating Economic Growth in the Caribbean and Does Size Matter? Yes, If You are Caribbean! shows that small economies—defined as countries with populations of less than 3 million—face several unique size-driven macroeconomic challenges and discusses whether or not smallness actually represents a binding constraint on growth. Moreover, this research illustrates, that for the Caribbean in particular, the relatively small size of the economies creates unique economic management problems, primarily: diseconomies of scale in the provision of public goods and services can lead to underprovision, and unfavorable access to global financial markets driven by relatively high transactions and monitoring costs.

Looking at median long term GDP growth, small economies tend to have a lower growth rate than the rest of the world. The first panel in the chart illustrates this point by comparing the median growth rates between 1980 and 2012 for the two groups, and shows that while small countries grew on average 3.6 percent per year, the rest of the world (ROW) grew at 3.8 percent.

However, as the second panel shows, growth rates for the two groups are similarly clustered around their respective averages, indicating that size is unlikely to act as a binding constraint on growth. [1] But that said, as shown by the relatively higher slope of the red line, the marginal positive effect of a higher population on growth is particularly pronounced for small economies, thereby implying that among the small economies, those that are bigger have enjoyed, on average, relatively higher historical growth rates.

Small economies are also vulnerable to external shocks as illustrated by the third panel. Perhaps this is one reason why, despite not being a binding constraint on growth, smallness still hurts. The source of these risks normally depends on the structure of the economy: tourism countries are exposed to the macroeconomic cycles of their main tourism partners, while commodity exporters depend on the conditions where the buyers of their exports are concentrated. Other sources of risks for the Caribbean economies include remittances and FDI flows.

Not unsurprisingly, countries with higher per capita GDP also exhibit higher human development as can be seen in the fourth panel. The Caribbean countries tend to follow similar patterns as other comparable small economies. However, conceivably and in line with much of the development literature, this relationship suggests that investing in human development may trigger growth despite smallness.

Comparing the volatility of GDP growth of small economies with the ROW, it is evident from the fifth panel that smallness is associated with greater volatility. We posit that this could be due to a combination of lack of diversification as well as the reliance on main tourism and trade partners as mentioned before.

So while size does not appear to be a binding constraint on growth of small economies, smallness is closely associated with several macroeconomic characteristics which makes it a painful burden to carry.

[1] Indeed, if smallness was a binding constraint then one would expect the growth rates to be tightly distributed around the group average indicating that it is hard to escape the size constraint.