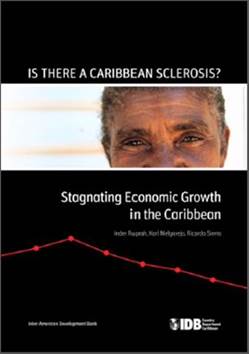 The Inter-American Development Bank’s Caribbean Economics Team is pleased to present Is There a Caribbean Sclerosis? Stagnating Economic Growth in the Caribbean.

This report, which comprehensively addresses the issue of poor economic growth in the Caribbean, is structured around the following key questions:

-Does the country’s size matter for economic growth and volatility?

-Which economic policies might decision-makers adopt to promote higher and sustainable economic growth?

IS THERE A CARIBBEAN SCLEROSIS? STAGNATING ECONOMIC GROWTH IN THE CARIBBEAN

The report attributes the poor performance to a wide range of possible explanations: lower factor inputs (labour and capital) and total factor productivity, inferior competitiveness, worse institutional quality, weaker private sector, greater macroeconomic instability, tougher economic and geographical neighborhood, and frustrated regional integration agenda. The Caribbean performs worse than other small economies do in practically all of these factors. Hence, it is not size that accounts for the Caribbean’s relatively poor economic performance. Instead, there appears to be a generalized sclerotic effect on institutions and policy. This conclusion has troublesome implications: policy inaction may be due to the powerful few who may lose out under reforms even though many may gain, that is, there is an economically and politically powerful alliance against policy changes.

Nonetheless, the report considers two possible policy options in the context of the world economic outlook. One option is to “let it be,” which entails waiting for world economic recovery to pull up Caribbean economic growth. However, the report notes that in the early seventies, the Caribbean’s real gross domestic product per capita was four times larger than that of other small economies. Today, it is slightly less, and forecasts suggest that the relative decline will continue under the “let it be” option. The alternative option is to “cross the Rubicon” which entails engaging in a process of stabilization and structural reform directed toward higher and more sustainable economic growth. Such an option has to not only overcome vested interests in the status quo but also be tailored to each country.

We welcome your comments and feedback. Please send to: cet@iadb.org.