After 27 months of growth, the value of exports from countries in Latin America and the Caribbean (LAC) fell by 1.6% in the first quarter of 2019 compared to the same period in 2018. Annual export growth around 8.9%, as was the case in 2018, is now a thing of the past.

These findings were revealed in the 2019 edition of the report Trade Trend Estimates: Latin America and the Caribbean, recently published by the Integration and Trade Sector of the Inter-American Development Bank.

Several factors converged to end a period of growth that lasted just over two years: trade tensions between China and the United States, falling commodity prices, and lower demand for the goods exported by Latin America. However, the region’s performance is part of a wider trend: Latin American export volumes stagnated in parallel with the overall behavior of global trade.

China was the most dynamic destination market in the first quarter of 2019, although shipments to that country slowed in comparison with 2018. Exports within Latin America and the European Union went into contraction, and demand for imports from the United States slowed markedly. 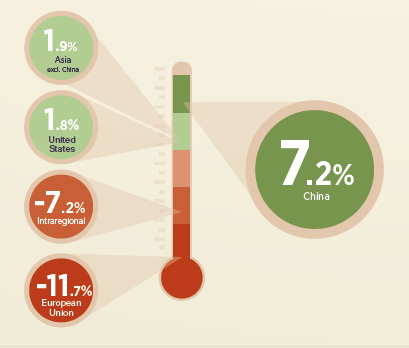 Drop in exports by country

The contraction was caused by a sharp drop in South American exports, which was compounded by the rapid decline in Mexico’s export performance. Let’s explore this in more depth.

Exports from South America had grown at a healthy 8.3% rate in 2018 but contracted 5.4% year-on-year in the first quarter of 2019. This downturn was driven by the performance of the two largest economies in the subregion, Argentina and Brazil, although every country in South America except Ecuador and Suriname also went in the red.

Argentina. The country’s exports fell by 2.3% year-on-year from January to March, as a result of the dramatic reduction in exports to the rest of South America (-6.0%), the European Union (-12.7%), and the United States (-13.8%), mainly due to lower exports of flour, soybeans, biodiesel, and aluminum and aluminum manufactures.

Soybean prices fell by more than 12% in the first five months of 2019, which seriously affected Argentina and Paraguay, but also had an impact on Brazil. Two factors caused this price drop. First, the trade dispute between the United States, the main global soybean supplier, and China, the largest buyer. Second, the outbreak of African swine flu (mainly in China) has reduced the number of pigs being raised, whose diet is mainly based on soy.

Brazil. Exports fell 4.1% in the first quarter of 2019 in comparison with the same period in 2018, a performance marked by a 28.4% drop in sales to the rest of South America and a 46.7% drop in shipments to Argentina. Transportation materials (especially cars), raw and refined sugar, and products from the chemical industry all contributed significantly to this downturn.

Mexico. Unlike the other major Latin American economies, Mexico saw a 2.3% increase in its exports during this period, but this still represented a slowdown, which was explained by lower growth of exports to the United States and shrinking sales to the European Union and the rest of Latin America and the Caribbean.

Although Latin America’s largest economies played a decisive part in the region’s aggregate performance, exports stagnated in nearly all countries in the region. 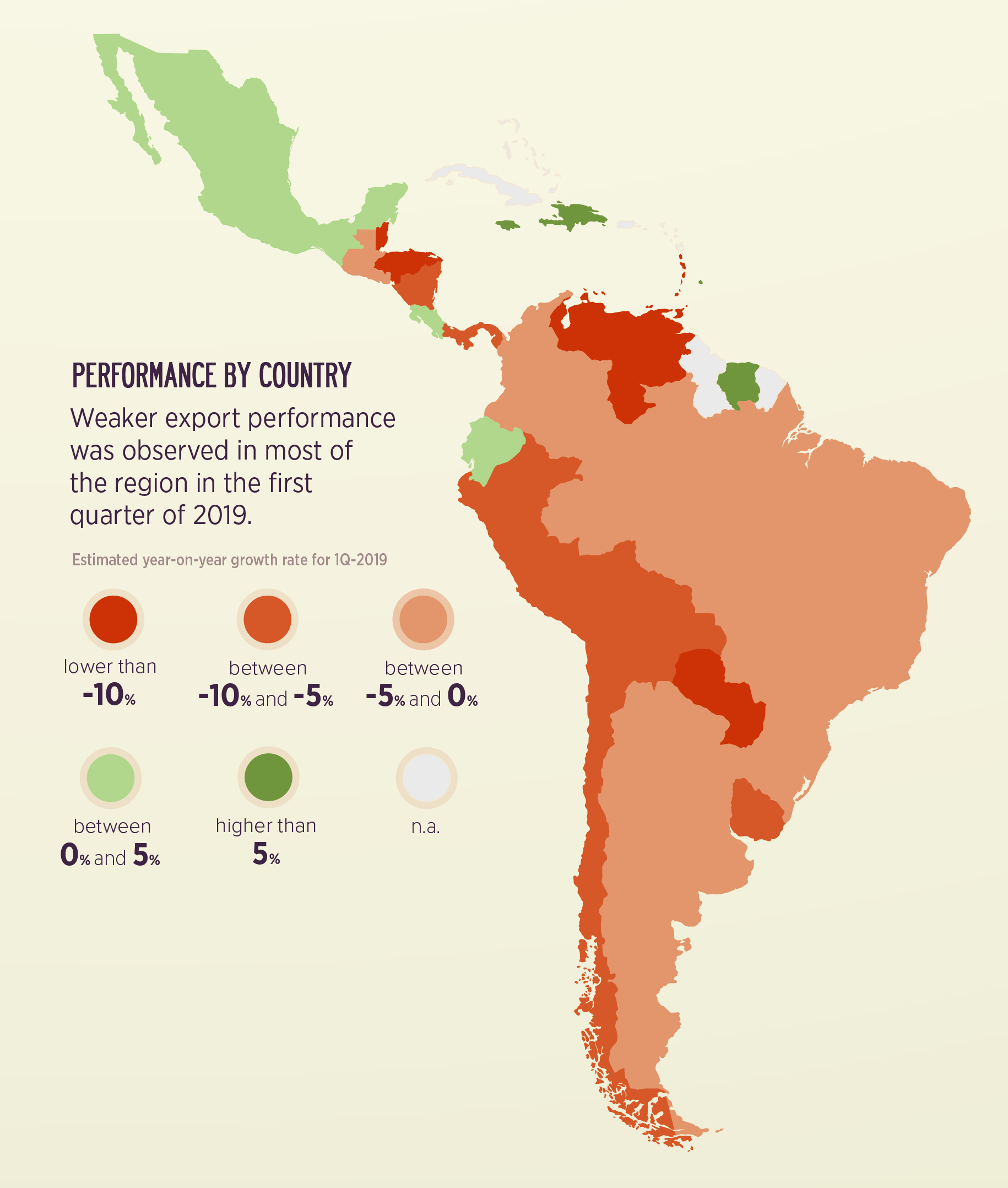 While tensions between the United States and China persist and global trade continues to stagnate, LAC countries need to seek alternative ways to grow their exports.

Countries could diversify their export baskets, increase service exports, invest in attracting foreign direct investment, and expand further into new markets with enormous potential for growth, such as India, which has so far remained virtually unexplored. For example, according to this recent IDB study, LAC exports to India could grow by 42% or US$7.6 billion in the medium term.

They could also give fresh impetus to regional integration schemes. For example, the upcoming summit of the Pacific Alliance is an opportunity for Chile, Colombia, Peru, and Mexico to deepen the integration process and forge closer ties with MERCOSUR (Brazil, Argentina, Uruguay, and Paraguay). As this IDB report concludes, initiatives of this sort are key to promoting greater productivity and growth in the region.

These are just some of the actions that LAC countries may take to ensure that their future does not depend on the clouds of global trade frictions clearing. The IDB’s Integration and Trade Sector stand ready to support them through this process.