As is described in detail in Trade Trend Estimates: Latin America and the Caribbean (2018), Latin American exports grew by around 13% in 2017, a sharp acceleration in comparison with the 3.3% drop of the previous year. This rate of growth outstripped that of global exports and marks the end of a period of almost four consecutive years of contraction.

Total LAC exports in 2017 were worth close to US$985 billion, although this still fell short of the peak export values of 2014. This recent growth is largely explained by recovering commodity prices and the moderate increase in export volumes, although these only grew in a handful of countries. 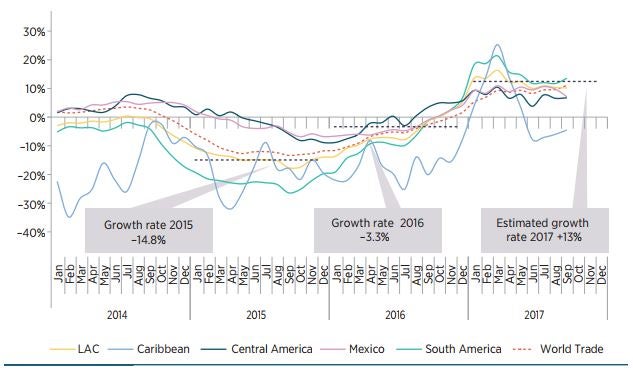 Source: IDB Integration and Trade Sector with data from official sources and the Netherlands Bureau for Economic Policy Analysis (CPB) for world trade.

This growth in LAC is mainly explained by the upturn in exports to the region’s main trade partners. The increase in intraregional flows (12%) also made a significant contribution to trade performance, which stands in stark contrast to the previous year, when these had a negative effect on the overall result. However, flows to several destination markets slowed over the course of the year and it is thus worth inquiring how sustainable this apparent recovery actually is.

Improvements in the global context have led to conditions that are increasingly favoring an expansion in regional exports.

Rising commodity prices remain the driving force behind Latin America’s export performance. The upturn that was observed in early 2017, above all, was largely explained by rising prices for oil and some minerals, which then showed signs of stabilizing over the course of the year. In contrast, the prices of agricultural products grew more moderately or even fell, in some cases. All the same, some commodity markets have recently begun to show upward trends that are improving the outlook for the coming quarters.

The most significant of these may come from the oil market. The price of crude oil (Brent) went above US$70 a barrel for the first time since the oil market collapsed in 2014. Oil prices have rallied due to the reduction in oil stocks following the production cutbacks agreed on by the Organization of Petroleum Exporting Countries and allies such as Russia. Another factor was the increased perception of geopolitical risk factors in several oil-producing countries. Industrial metal prices are set to benefit from improvements in global growth prospects and demand from Asia, which absorbs half of the global industrial metal supply. In contrast, downturns are expected in the markets for the region’s main agricultural products for the rest of the year.

Source: IDB Integration and Trade Sector based on data from official national sources, Bureau of Labor Statistics (BLS) and the Organization of Petroleum Exporting Countries (OPEC).

Note: The value of exports for Mexico is deflated with BLS indices and the volume exported by Venezuela is estimated using OPEC data. LA-10 is an average of national indices weighted by the export value of each country in 2010; the sample represents 93% of LA’s foreign sales that year.

Running counter to the upward trends in prices, which should continue to prop up exports from several countries in the region, an analysis of the evolution of export volumes reveals a more nuanced picture. The data available for ten countries in Latin America points to a 4% year-on-year growth in the first three quarters of 2017, a rate which is almost double the average for the last four years. However, this growth was concentrated in just four economies: Brazil, Mexico, Peru, and Uruguay. The remaining countries for which data is available experienced contractions or no variation in exports measured in real terms. The sustainability of the trade recovery will thus depend on whether this incipient expansion in export volumes becomes more widespread.

When regional data is disaggregated by subregion, South America turns out to be the main area where export values have accelerated (up by 16%), which runs markedly against the trends in the region’s export performance the previous year (-4.5%). The economies that benefitted most from price increases were the main energy and mineral exporters, while Brazil’s and Peru’s export volumes were also notably dynamic. Asia and the United States were the destination markets that contributed most to this expansion, although the intraregional market also played a significant part.

Mesoamerica continued to grow at a more moderate rate (9%), which contrasted with the slight downturn of the previous year (-1.5%). This outcome was largely shaped by Mexico, due to the relative size of its market—its exports grew at substantially higher rates than those of the other countries in the subregion. All the same, the most significant piece of qualitative data is that although nearly all the growth in Mexico’s exports was explained by variations in the volumes exported to the United States, its sales to the rest of the world also grew at above-average rates.
Caribbean exports grew by 11% after contracting at an even higher rate the previous year (-17.6%). Exports grew in every country in the subregion except Barbados and Haiti. Bahamas, Suriname, and Guyana saw the highest rates of growth, although the increase in exports from Trinidad and Tobago made the largest contribution to the growth in Caribbean exports, due to its significance in the total. With regard to destination markets, the Caribbean itself explained two-thirds of total growth.

To consolidate current trends in export growth, Latin American economies need to revert the growing trend toward the loss of competitiveness.

In sum, after moving beyond the longest contraction in their recent history, LAC exports are growing once again. Looking to the future, the prospects for consolidating this trade recovery will be closely tied to ongoing improvements in commodity prices, the recovery of the global and regional economies, and whether the growth in real trade flows becomes more widespread.

Although it is likely that commodity prices will continue to prop up the region’s trade performance, it would be unwise to expect a similar improvement in terms of trade to the one that held up the external sector in the last few decades. As is analyzed in greater detail in the 2017 Trade and Integration Monitor, the countries of Latin America and the Caribbean are up against a global trade context that is significantly less favorable than the one that prevailed before the global financial crisis. The reasons for this are both the increasing loss of competitiveness within the region and the re-emergence of protectionism globally, which may limit the region’s opportunities for accessing key export markets in the future.

It is thus to be hoped that this recent improvement in trade performance will not give rise to complacency, but will instead prompt incentives that promote a new generation of productivity stimulus policies with the aim of improving the region’s competitive position in international markets, along with pragmatic regional integration initiatives that contribute to an expansion and diversification of trade.