In Latin America and the Caribbean, it is estimated that the number of exporting firms is close to 112.000. For the universe of exporters, the stagnation of the external markets seen in the last few years meant fewer opportunities to grow through trade. This might be changing.

As is described in detail in the latest update of the Latin America and the Caribbean Trade Trend Estimates, in the first quarter of 2017, exports from Latin America and the Caribbean grew at a rate of 17% in comparison with the same period in 2016, which marked a turning point in the trend over the last four years. External sales grew in nearly all the region’s economies, particularly in South America. This recovery signaled the end of the longest trade contraction in the recent history of the region, which lasted 24 months, from August 2014 to July 2016. 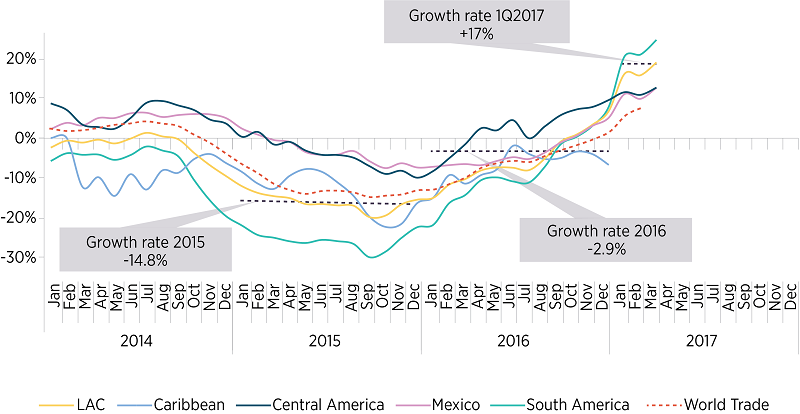 Source: IDB Integration and Trade Sector based on data from official sources and the Netherlands Bureau for Economic Policy Analysis (CPB) for world trade.
Note: LAC includes 18 countries in Latin America: Argentina, Bolivia, Brazil, Chile, Colombia, Costa Rica, Dominican Republic, Ecuador, El Salvador, Guatemala, Honduras, Mexico, Nicaragua, Panama, Paraguay, Peru, Uruguay, and Venezuela; and six countries in the Caribbean: Barbados, Belize, Guyana, Haiti, Jamaica, and Suriname. Estimations for the first quarter of 2017 did not include the Bahamas, Nicaragua, or the Dominican Republic as there was no available data. World trade is the average of global imports and exports.

The growth of the export sector is excellent news, as it will contribute to improving the prospects for economic growth in the region after two years of recession. However, it is worth evaluating how sustainable this improvement in trade performance is. Can similar growth in external sales be expected for the rest of the year? How might the drivers of trade flows be expected to evolve? What risks is the region facing into the future?

The main explanation for the change in the trend is the stabilization of commodity prices.

These bottomed out in 2016 and some – such as petroleum, coffee, and oil – began to show signs of recovery toward the end of the year. However, recently there has been some uncertainty within commodity markets.

In the oil market, the extension of the Organization of Petroleum Exporting Countries (OPEC) agreement to curb production may contribute to sustaining the price of crude oil, but only insofar as it is more effective than that of the previous semester in reducing global stocks. The price of metals will depend mainly on whether the infrastructure investment plan proposed by the new administration in the United States goes ahead, and on the balance between stimulus policies for the housing sector in China and the perceived risk of speculative bubbles there. Meanwhile, the prospects for the LAC agricultural market are stable or may even experience downward pressure, essentially due to climate factors that suggest harvests may be bountiful this year.

Given these unknown factors affecting the stability of price trajectories, the upward trend in export volumes is particularly significant. The information available for 10 countries points to an encouraging upturn in the first two months of 2017 (2.2%) for the region as a whole in comparison with the same period in 2016.

Source: IDB Integration and Trade Sector based on data from official sources and own estimations.

However, Mexico and Peru are the only two countries that saw significant growth in real exports, so they had a greater impact on the estimation of aggregate data for the region. In the remaining economies, exports largely remained stagnant or continued to fall. The spread of the incipient upward dynamic in export volumes will thus be fundamental for the region in the coming quarters.

The notable rise in prices and the uneven growth in export volumes points to a mixed outlook for the countries in the region.

Export values accelerated intensely in South America, where estimated year-on-year growth was 23% for the first quarter of 2017, which contrasts sharply with the annual reading at the end of 2016 (-4.6%). These increases were greatest in countries where energy and mining products represent a high proportion of the export supply, while those that mainly export their manufactures to the Brazilian market had more modest outcomes.

In Mesoamerica, which includes both Mexico and Central America, the estimated growth rate for external sales stood at 11%, in contrast with the slight downturn (-1.5%) recorded at the end of 2016. Although countries such as Honduras and Guatemala outstripped the subregional average, Mexico naturally determined the aggregate results due to its size and the unexpected increase in export volumes to the United States, the stability of which remains to be seen.

The Caribbean experienced an upturn in exports, which were estimated at 12% for the first quarter of 2017. This was due to highly varied and volatile performances within this subregion, such as the notable expansion of Jamaica’s market (32%) and the severe contraction of that of Barbados (-16%).

This change in export trends is expected to be consolidated in the coming quarters, but it is probable that growth seen during this first quarter will be attenuated over the course of the year.

The statistical construction of the indicators implies that the significant expansion observed for the first quarter is skewed by the basis of comparison for 2016, when exports hit an all-time low. Given that the year-on-year measures of the coming quarters will include the second and third quarters of 2016, when export values began to recover, a more moderate annual growth rate is to be expected.

Going forward, the consolidation of the region’s current export performance depends on whether commodity prices continue to improve despite the aforementioned uncertainties affecting markets. Another factor is whether the region — particularly Brazil — gets back on the path to growth and intraregional trade is reactivated.

An acceleration in external demand, particularly from the United States and China, would bolster exports, while a return to protectionism would skew this forecast in the opposite direction.

In sum, Latin America and the Caribbean has moved beyond the worst contraction in trade in its recent history, and the downward trend in the commodities supercycle seems to have leveled off. However, as is analyzed in detail in the Trade and Integration Monitor 2016, the region’s medium-term trade performance will depend fundamentally on whether its economies are able to transform their productive and trade specialization structure, and cut down the excessive dependency on exports of commodities with low value added. This could be achieved through policies to promote competitiveness, trade diversification, and regional integration.

As the last IDB Macroeconomic Report indicated, the technical and political conditions for a change in direction in the region’s international integration strategy have already been established. However, this fledgling improvement in export performance should not make the implementation of this strategy any less urgent. The economic perspectives of hundreds of thousands of regional firms are at stake.