As described in the most recent update to the IDB’s Trade Trend Estimates for Latin America and the Caribbean, the economic crisis triggered by the COVID-19 pandemic is increasingly affecting trade as 2020 progresses. The region is headed for a record trade shock.

Latin American exports contracted by 3.2% in the first quarter of 2020 as compared to the same period in 2019, and the downturn is deepening. As the pandemic spread to the West in April, exports from Latin America plummeted, bringing the year-on-year growth rate to around -30%.

A leading indicator developed by the IDB to forecast export trends continues to point downward for the coming months. Simply put, there is still no light at the end of the tunnel. A historical comparison reveals that the current export contraction signals are even more robust than those observed during the Great Recession of 2008–2009.

The reduction in global demand hit the region through both the price and volume channels. Between January and April, the price of oil experienced a historical drop reaching negative values, and that of most of the agricultural and extractive commodities exported by the region continued on the downward trend started the previous year. Export volumes entered into negative ground for the first time in several years, contracting at an estimated rate of 1.2%. 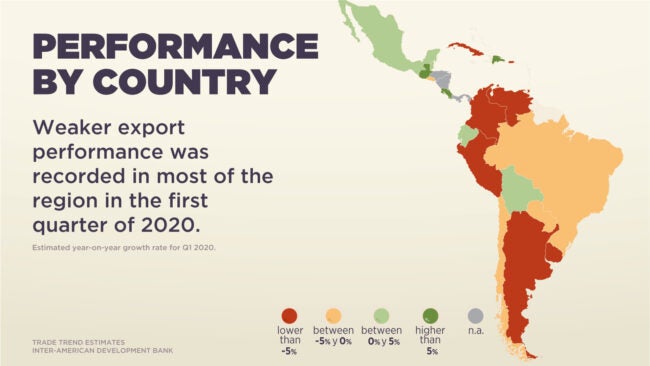 South America was hit particularly hard by falling commodity prices, which prompted a 7.6% decline in export values. Prices reacted quickly to expectations of a severe global recession. The price impact was gradually amplified by the contraction in real demand from the region’s main trading partners, especially China, the first global epicenter of the pandemic.

Trade contagion has been slower to reach the northern end of Latin America. In the first quarter, exports kept afloat in Mexico (0.6%), and grew at a healthy rate in Central America (9.1%). Mesoamerican countries benefited in large part from the expansion of demand from the United States, which began to decline in March as that country became the new epicenter of the pandemic. As an example, in April, exports fell by 41% in Mexico and 51% in El Salvador. 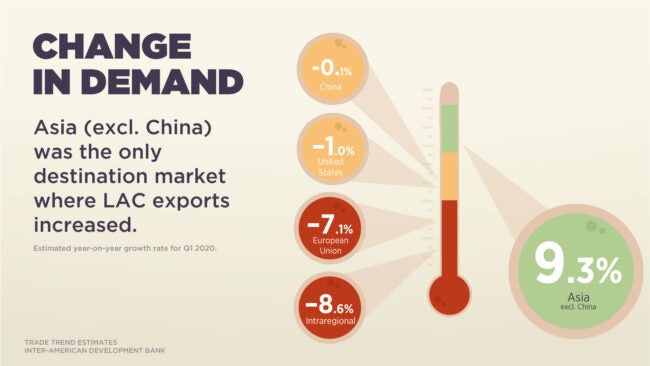 While the heterogeneity in the export performance of the countries in the region is mainly explained by the trend in demand from China and the United States, it is worth noting that the sharpest drop was observed in purchases from other Latin American countries, which contracted by 8.6%. This figure is a harbinger of the difficult times ahead for intraregional trade, as this contraction had already begun before the onset of the pandemic.

Against this backdrop, exports from the region will likely contract even more severely than during the Great Trade Collapse of 2008–2009, when external sales fell at an average year-on-year rate of 24% over 13 months. This outlook is based not only on the trade dynamics analyzed in the report, but also on some long-term trends that were already affecting the trade environment before the COVID-19 crisis.

Moreover, the scope of the global trade shock triggered by the COVID-19 pandemic is much larger than the one that followed the 2008–2009 crisis. On that occasion, developing countries, particularly those in Asia, managed to decouple themselves from the recession in advanced economies and continued to drive demand for exports from the region.

Finally, there is still great uncertainty around when the global economy will start to recover from the current crisis, and whether there will be a relapse in economies that have begun to reopen since the health crisis peaked.

In the advanced economies, the case of the United States stands out, as reopening measures in several states coincide with new outbreaks of COVID-19. Moreover, the states hardest hit by the economic crisis are precisely those with the closest trade ties to Latin America.

In contrast, Europe seems to have moved past the most critical phase in the health crisis. However, the economic recession is expected to be deeper in Europe than in the United States, and the propensity to import from Latin America was already on a downward trend before the pandemic hit.

Among the emerging economies, China and the rest of Asia are already in a recovery phase, which is helping Latin American export volumes to rally. However, the weight of commodities in the region’s export basket to Asia, combined with the downward trend in their prices, suggests that there will be a moderate short-term impact on export values.

The outlook within Latin America itself is bleak, as the COVID-19 pandemic is affecting the region hard, and economic activity is plummeting, which points to ongoing weakness in intraregional trade.

Looking ahead, Latin American countries should not lose sight of the importance of laying the foundations for greater trade resilience after the crisis. For international trade to remain a driver of economic growth, reforms are urgently needed to reduce trade costs and increase competitiveness, with a view to better positioning the region’s economies in post-COVID-19 global value chains.

Trade Trend Estimates: Latin America and the Caribbean is available for download here.