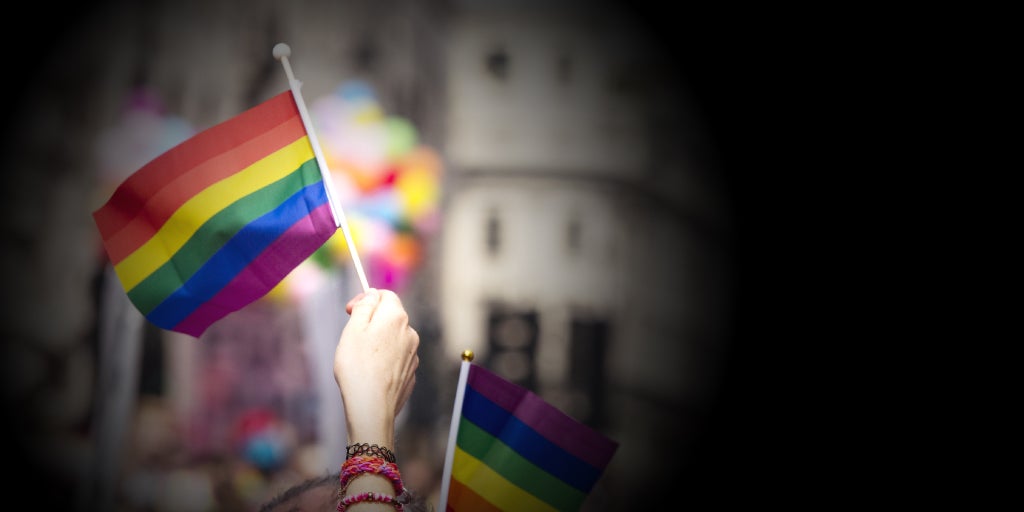 The #MeToo movement has been a powerful force since it went viral in October 2017. For some women survivors of sexual harassment and abuse, it has been a time of reckoning and of rallying around one another. #MeToo has also played an important role making the invisible more visible.

In August 2018, #MeQueer emerged to call attention to the experiences of Lesbian, Gay, Bisexual, Transgender/sexual, and Queer (LGBTQ+) people. Today, the International Day against Homophobia, Transphobia and Biphobia, we aim the spotlight on discrimination, harassment and violence based on sexual orientation and gender identity.

In 1990, the World Health Organization stopped classifying homosexuality as a mental disorder. It is remarkable that this shift took place just 29 years ago. And while, since that time, the protection of LGBTQ+ persons has increased and social stigma has decreased in many countries, there is still widespread discrimination that excludes many of them from many spheres of society and throughout their lifecycle.

Within the Family. LGBTQ+ experiences with harassment and abuse frequently begin in the natal family. Life stories from Lima, Peru illustrate that violence against LBGTQ+ people most commonly occur in the home, at the hands of family members. In many countries, there are LGBTQ+ youth who are thrown out of their homes and live on the streets because of family rejection.

Such abuse of LGBTQ+ youth has grave consequences.  For example, the Centers for Disease Control and Prevention in the U.S. found that 47.7% of LGB students had seriously considered suicide in the prior 12 months, compared to 13.3% of heterosexual students.

At Work. LGBTQ+ persons also tend to face higher levels of unemployment and greater difficulty finding jobs. According to a study in the US, many believe that their sexual orientation or gender identity is an obstacle to becoming employed. And when they are employed, LGBTQ+ persons are likely to face harassment from colleagues and supervisors.

In the United Kingdom, over 10% of trans people have experienced verbal abuse at work, and 6% were physically assaulted.

Health Care Services.  Discrimination and exclusion are also prevalent in the health sector. In Colombia, 26% of LGBTQ+ persons report being openly discriminated against by a doctor. As a result, many report concealing their sexual orientation and gender identity while accessing health services or avoiding going to the doctor even when they need it.

In Public Spaces. LGBTQ+ persons are disproportionately vulnerable to social violence.  In the US, while 4.5% of the population self identifies as LGBTQ+, 17.9% of all hate crimes are anti-LGBTQ+ in nature.  In the UK, one in five LGBTQ+ persons have reported suffering from a hate crime in the last 12 months.

This is also prevalent in Latin America; 600 LGBTQ+ persons were murdered in El Salvador between 1993 and 2017, making it one of countries in LAC with the highest levels of violence against this population.

In order to create more inclusive societies and economies, it is critical to reduce homophobic discrimination and violence and raise awareness of the challenges that LGBTQ+ persons face.  In the past decade, Latin America has made great strides to expand LGBTQ+ legal protections and rights, but the progress has not been uniform, and discrimination and abuse persist. Developing effective policy solutions requires representative data about this population. Across the region, there is still a dearth of such data and there is even less information on what works to reduce LBGTQ+ discrimination and violence across sectors and across the life cycle. Making data visible must be a priority.

More international organizations, including the Inter-American Development Bank, and national governments have now included LGBTQ+ persons in their gender equality and diversity agendas. With this, many more of us have the green light to act! We can all play a role to help turn these new commitments into concrete actions for change.

Anne-Marie Urban is Lead Specialist in Social Development in the Gender and Diversity Division of the IDB. She has worked in various sectors, supporting projects related to rural development, social investment, violence prevention, infrastructure, reproductive health and municipal development. She has also led the preparation and execution of the IDB Gender Action Plans. She holds a Master's degree in International Development, Local Planning and Environment from Clark University and a BA in Political Science and German from Vanderbilt University. Prior to joining the IDB, she worked in the Office of Gender Equality and Women's Empowerment of the United States Agency for International Development (USAID) and in a research project funded by USAID.

Maria Jose Flor Agreda works as a gender mainstreaming and knowledge management consultant at the IDB’s Gender and Diversity division. Prior to joining the Bank, she worked extensively on intersectional research and policy design related to parental leave, migration issues, informal labor, and inclusion of women and LGBTI persons in the United States, Ecuador and Trinidad and Tobago. She has also worked in outreach and communication initiatives with government institutions. Maria Jose holds an MSc. in Gender, Policy and Inequalities from the London School of Economics (LSE), an MSc. in Development Statistics from the University of the West Indies in Trinidad and Tobago, a Specialization in migration and development from FLACSO-Ecuador, and a BA in political science and journalism from the University of Nevada, Las Vegas.