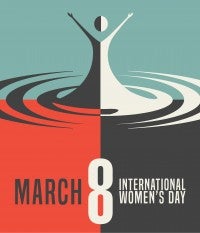 Latin America and the Caribbean celebrate International Women’s Day March 8 with a mixture of pride and frustration. Pride, because women have dramatically increased their level of education and their participation in the labor force. Frustration, because they still have trouble breaking through the glass ceiling into top managerial positions and continue to earn less than men even for the same level of experience.

On the positive side, women are ever more on the move in the region, heading to classes at the university or to a job at an office. Furthering a trend that began in the early 1990s, they outpace men in higher education. By 2007, 26% of working women compared to 17% of working men had some kind of university experience. Moreover, they are increasingly earning salaries. Between 1990 and 2013, the participation of women in the labor force rose from 40 to 54 percent, the highest increase of all regions, according to a United Nations report.

Fortunately, women can now be found at the pinnacle of power in Latin America and the Caribbean. The number of female presidents in the region rose from three in the 1980s to seven in the 2000s, and by 2012, women held 20% of parliamentary seats. At the corporate level, a few countries —Jamaica, Colombia, and St. Lucia— even have a higher share of women than men in management.

Nonetheless, a significant gender gap persists, especially in the higher professional ranks. According to a 2012  report by the IDB, for example, women hold only 33% of the better paid professional jobs in the region, including those in architecture, law and engineering, while being overrepresented as service workers, merchants and administrative personnel. And on average in Latin America and the Caribbean only 8.5% of board members and 9.2% of executives per company are women, according to another IDB study. Indeed, at all levels of the labor hierarchy disparities are the norm, as stereotypes and age-old notions of the proper role of men and women in both the home and the workplace continue to hold women back. Because women continue to shoulder a heavier burden in household duties, they work part-time more than men. Because they take on more of childrearing responsibilities, they enter the labor market later and are absent from it for longer stretches, preventing them from accumulating the experience that ultimately leads to higher wages. Today, as a result of these and other factors, working men in Latin America and the Caribbean earn 10% more than working women. Strikingly, they earn on average 17% more than women even when their age and experience are identical.

To its credit, the region is becoming aware of the human costs of these disparities. It also is seeing how they impact economic growth. Since 2014, for example, Argentina, Brazil, Ecuador and Uruguay have passed laws requiring equal pay for equal work and banning gender discrimination in hiring. Eight countries in the region have ratified the ILO Domestic Workers Convention. That requires minimum wages, overtime remuneration, and annual leave for domestic workers, the overwhelming majority of whom are women. Moreover, protections for mothers are improving, with 25% of the countries in the region now granting a minimum of 14 weeks paid maternity leave.

Still, much more needs to be done. By expanding maternity leave and granting paternity leave, countries could ensure that the family burdens are more evenly distributed between men and women. Women then would be able to have children without stalling their careers or being forced out of the workplace altogether. By increasing the number and quality of childcare centers, they could help women move from part-time to full-time work. And by increasing legislation banning discrimination in hiring and remuneration, as well as sexual harassment, they could go a long way towards leveling the playing field. That, in turn, would help speed the the psychological and cultural changes required so that women are not reflexively relegated to subordinate positions. If there is still a long road to travel, there is also hope in new generations with new attitudes and new convictions. And those convictions hold that eliminating inequality is essential to both the fight against poverty and human dignity.